Mae Sai: Rescue divers were making progress through a key passageway inside the flooded mountain cave in northern Thailand on Monday where 12 boys and their soccer coach have been missing for more than a week. 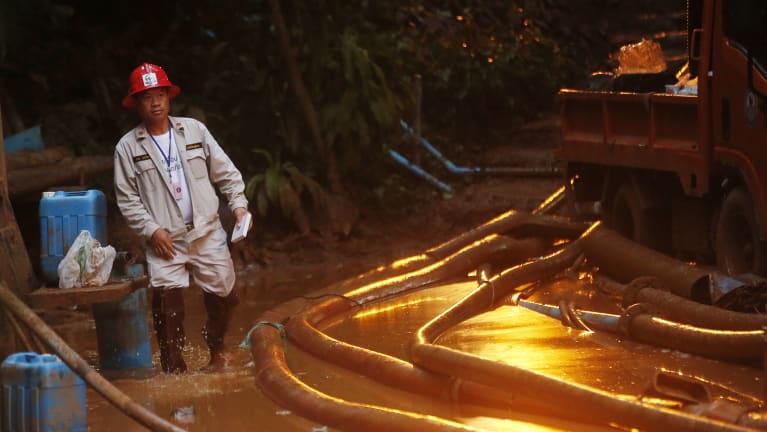 A rescuer makes his way down muddy steps past water pump hoses at the entrance to a cave complex where 12 soccer team members and their coach went missing.

Thai navy SEALs said in a Facebook post early on Monday that divers since Sunday night had reached a bend where the kilometre-long passage splits in two directions. The divers are aiming for a sandy chamber on higher ground in the cave, where they believe the group would be safe.

The boys, aged 11 to 16, and their 25-year-old coach entered Tham Luang Nang Non cave in Chiang Rai province on June 23. Heavy rains that flooded key passages are believed to have trapped the soccer players and have thwarted the search for them.

Divers have been stymied again and again by muddy water rising filing sections of the cave and forcing them to withdraw for safety reasons. When water levels dropped Sunday, the divers went forward with a more methodical approach, deploying a rope line and extra oxygen supplies along the way.

"I hope that today we will continue to have another good day. It will be even better if everything else could run smoothly," Chiang Rai Gov. Narongsak Osatanakorn told reporters Monday.

He said the passageway the divers are making their way through goes upward in some places and downward in others and is extremely narrow. It is difficult for divers with all their gear to fit through. 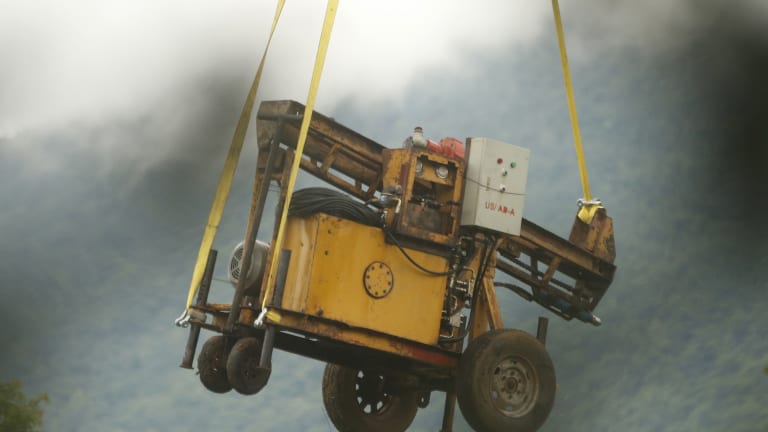 A military transport helicopter carries a drill machine to be used for the rescue search.

In addition to the divers, teams have been working to pump out water as well as divert groundwater. Other efforts have focused on finding shafts on the mountainside that might serve as a back door to the blocked-off areas where the missing may be sheltering.

Teams have been combing the mountainside looking for fissure that might lead to such shafts. Several have been found and explorers have been able to descend into some, but so far it is not clear whether they lead to anywhere useful.

Narongsak said they were focusing on Sunday on two of the shafts.

Experts in cave rescues from around the world continued to gather at the site. An official Australian group has now followed a US military team, British cave experts, Chinese lifesaving responders and several other volunteer groups from various countries.