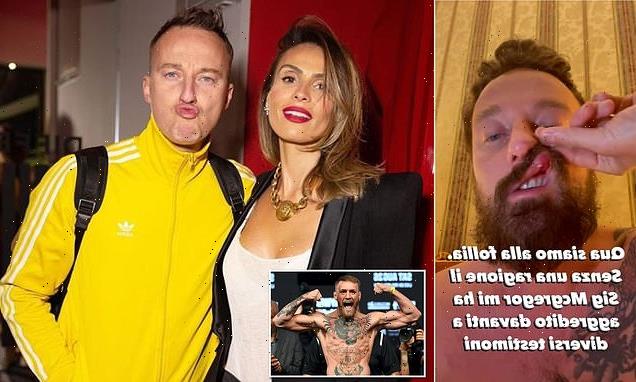 EXCLUSIVE: ‘We were having a friendly drink… then suddenly he punched me in the face’: Shaken Italian DJ claims Conor McGregor sent him flying across the room in ‘unprovoked attack’ at Rome party before the MMA fighter was dragged away by his bodyguards

An Italian DJ has revealed how a pleasant evening of drinking at a hotel with Conor McGregor ended with him being punched in the face.

Francesco Facchinetti says he has a broken nose and squashed vertebrae in his neck after the unprovoked attack by the MMA fighter at a party exclusive Regis Hotel in Rome.

Speaking exclusively to MailOnline, a shaken Mr Fracchinetti said: ‘One minute we were talking in a friendly manner and the next he just lashed out at me.

‘We were having a drink together and everything seemed fine when suddenly he changed. I was a few inches from him when he punched me full in the face with his right hand.

‘I went flying backwards and crashed into a table.

‘I was stunned. There was a lot of blood, and my wife became hysterical and screaming. One of the bodyguards tried to calm her down and two people immediately jumped on McGregor and dragged him away.

Showing off his cut and swollen lip, the DJ said he met up with McGregor after he and his wife had been with the American actress Bella Thorne at Soho House in Rome after attending the premier of her new movie ‘Time is Up’.

McGregor allegedly texted Bella saying he wanted to meet up for a party so Mr Facchinetti and his wife dropped off their 10-year-old daughter at home and got to the hotel at midnight.

‘The party was in a meeting room and there was lots of vodka and whiskey. The hotel even opened the kitchen to supply food. McGregor had four Irish friends with him who were very friendly and we exchanged mobile numbers. It was all going great and we were having a brilliant time.

‘McGregor was very talkative chatting about this and that for three hours and the whole group was enjoying each other’s company.

‘We talked about Rome. Italy, and how he was taking delivery of his Lamborghini boat. I was very friendly. He would pour me a whisky and I’d pour him a drink. It was a good atmosphere. The situation was very calm and friendly’

Speaking exclusively to MailOnline, a shaken Mr Fracchinetti said: ‘One minute we were talking in a friendly manner and the next he just lashed out at me’. A spokesman for McGregor was unavailable for comment

But Mr Facchinetti said the mood of the host suddenly soured when around 3am when Bella and her husband, singer Ben Mascolo, announced they wanted to leave.

‘Bella said she had to get an early train to go to Milan for a premiere and she needed to get some sleep. I said the party could continue and would stay with my wife. That’s when he flipped. He was completely out of control. He seemed like he wanted to kill me for absolutely no reason. Bella was stunned, she couldn’t believe what happened. Thank goodness his bodyguards were there to take him away.’

He added: ‘There was absolutely no reason for him to lash out at me, it was totally unprovoked. He is a bully.

‘I have been to the police station to make a complaint of assault and I hope they take action. I did nothing to deserve this.

‘I do not want him to go to prison, but he has to learn that even though he is rich and famous he can’t go round hitting people for no reason.’

Mr Facchinetti revealed details of the alleged assault in a social media post to his one million followers where he showed off his cut lip.

He later visited a hospital for treatment and had a surgical collar fitted for his neck injury.

‘If this goes all the way to a court then it will be an example to him to change his ways. He has to be controlled and now what he is doing,’ he added.

McGregor was in Rome with his family for the baptism of his son Rian at the Vatican. He has also taken delivery of his £2.9m Lamborghini superyacht.

The two times UFC champion is recovering from a fractured ankle sustained in his last fight to Dustin Poirier.

Two years ago, McGregor was fined £850 for assaulting an elderly man in an Irish pub who had refused his offer of a drink.

He was spared prison by a Dublin court after expressing remorse and pleading guilty to assault.

In 2018 McGregor was charged with three counts of assault and one count of criminal mischief after police said he attacked a charter bus in New York carrying UFC fighters. He pleaded guilty to a reduced disorderly conduct charge in that case.