A Cambridge-educated junior doctor who was caught drink driving twice has been allowed to keep her job after a misconduct hearing ruled she did not pose a risk to patients.

Dr Lauren Fowler, 25, drank white wine with friends over lunch then crashed her Ford Ka in an area busy with pedestrians. The medic was so drunk she was barely able to speak to police, who found an empty bottle of wine in the footwell of her car.

Fowler was bailed but stopped again less than two months later after she consumed half a bottle of vodka then drove around a hotel car park near her family’s home in Styal, Cheshire. Tests showed she was more than three times the drink drive limit. 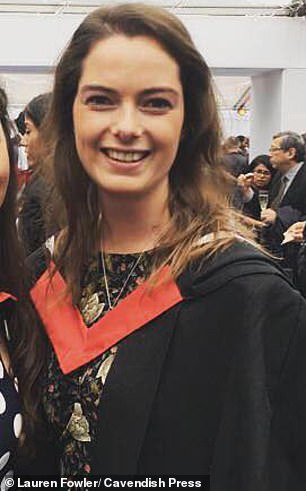 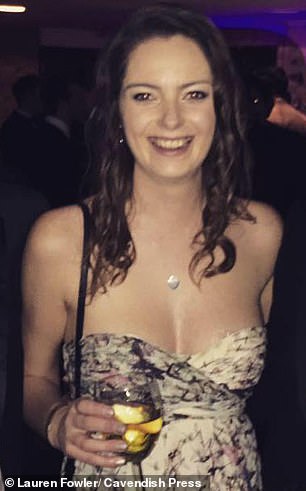 Dr Lauren Fowler, 25, drank white wine with friends over lunch then crashed her Ford Ka in an area busy with pedestrians. She is pictured in undated social media photos

Earlier this year, Fowler admitted drink driving and failing to provide a breath specimen but got a suspended prison sentence after claiming she had an addiction to alcohol due to the ‘stress’ of studying medicine at Imperial College London.

Fowler claimed she drank heavily during her studies at the world-renowned university and said did not know who to turn to for help. She has since stopped drinking and is currently serving a three-year driving ban.

On November 2, the first-year doctor faced a misconduct hearing held in private at the Medical Practitioners Tribunal Service in Manchester but was told she could continue working in medicine under supervision for the next 20 months.

In a redacted document issued after the hearing, panel chairman Gillian Temple-Bone said: ‘The Tribunal was aware that there had been a risk to Dr Fowler and to the public by her actions, although fortunately they were minor incidents with no injuries.

‘We have heard evidence her performance has exceeded expectations, and that her clinical work has posed no risk to patients.

She has also fulfilled the requirements of her criminal sentencing, including carrying out unpaid work and has voluntarily attended a drink-driving course. Dr Fowler, in oral evidence and through the reports of others, has shown she is very remorseful.’ 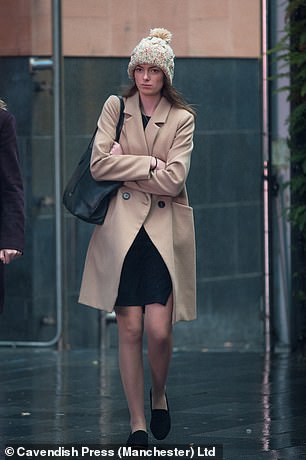 Fowler was bailed but stopped again less than two months later after she consumed half a bottle of vodka then drove around a hotel car park near her family’s home in Styal, Cheshire. Here she is pictured outside court in January

Miss Temple-Bone added: ‘The tribunal has no evidence to suggest there have been any issues to date regarding patient safety. On looking at the events of the past year following the convictions, Dr Fowler has done everything possible to remediate her conduct.

‘The Tribunal recognised she was convicted in a court of law, currently remains under a driving ban and has experienced public opprobrium through publicity – all highlighting to her and others the inevitable consequences and unacceptability of her behaviour in the eyes of the public.

‘Overall, the Tribunal has noted her remorsefulness. It has received positive reports and testimonials from colleagues who say she is a promising young doctor who excels in her training.

‘Her offending was serious but not of being fundamentally incompatible with continued practice. The punitive effect of a more serious sanction such as suspension would be disproportionate.’

Fowler had pursued her career in medicine after she excelled at Stockport Grammar school, where she was a senior prefect and attained two A* grades and an A at A Level.

She was also shortlisted for a UK Scientist of the Year award for a research project she carried out at Manchester University in 2011.

It is thought Fowler attended Clare College at Cambridge before enrolling in 2014 at Imperial College, which was founded by Prince Albert in 1845 and ranks 8th in the Times Higher Education World University.

But within days of her graduation ceremony, Fowler went out for lunch in Manchester during which she shared a bottle of wine with friends – and then drank more wine whilst at the wheel of her car. 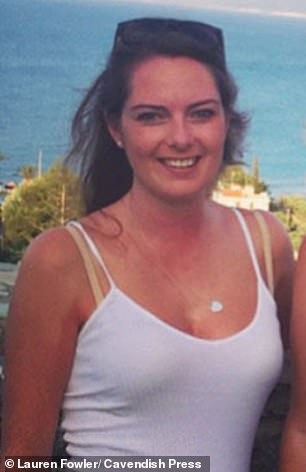 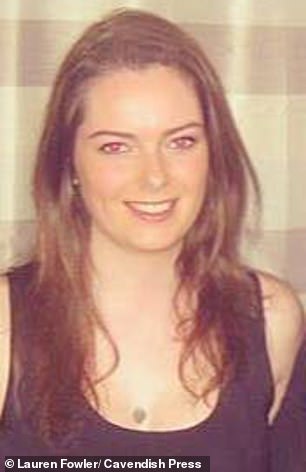 Earlier this year, Fowler (seen in undated social media photos) admitted drink driving and failing to provide a breath specimen but got a suspended prison sentence after claiming she had an addiction to alcohol

During her court appearance last January before Stockport JPs prosecutor Joseph O’Connor said: ‘Police attended a minor road traffic collision and met the defendant who was clearly intoxicated. She was swearing and slurring her words and they could smell intoxicants on her breath.

‘When they tried to speak to her they had trouble understanding what she was saying, she was incoherent and the officers assumed she was drunk.

‘As she was arrested she admitted that she had drunk two bottles of wine and was taken to the police station. She was described as acting very emotionally and she failed to provide a specimen of breath because she was so upset.’

She was bailed to face court but was held again on December 9 after being caught drink driving at the Stanneylands boutique hotel in Wilmslow.

Mr O’Connor added: ‘She collided with another car whilst trying to leave the car park of the Stanneylands Hotel. 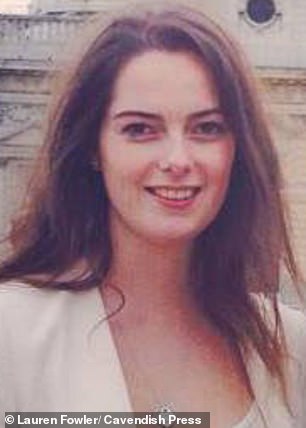 ‘When the police arrived they tried to speak to her, but the noticed a smell of intoxicants on her breath and she was slurring her words.

‘She was taken to the police station and gave two samples of breath. In interview she made admissions and told then she had drunk half a bottle of vodka before deciding to go to the gym. She accepts she shouldn’t have driven.

‘The second offence was committed whilst she was on bail, which is an aggravating factor. She was inebriated during the accident.’

Tests showed Fowler had 112 microgrammes of alcohol in 100 millilitres of breath. The legal limit is 35mg.

In mitigation her lawyer Helen Turner said: ‘This is somebody who was arrested for the first time in their life, she has never been to a police station before -she has an addictive behaviour and a very stressful lifestyle.

‘When she was 15 years old she was diagnosed with a brain tumour, received treatment for this and it was more or less cured. She flourished in her exams whilst this was going on and has flourished in her first year as a junior doctor.

‘It is insurmountable the amount of work she does. She works 48 hours during the week, and she works over time, and also volunteers at the weekend. You can’t deny the dedication she has for her career.

‘She has already made steps to making sure this never happens again. She has given up alcohol completely. She has removed all temptation to ever get behind the wheel by selling her car.

‘She has been seeing an addiction counsellor every week. She has shown an incredible amount of remorse for her actions. Her character references indicate that this isn’t the kind of thing you would expect from her.’