‘Dominic Cummings spits in the face of all our efforts, the whole NHS’: Doctor says he will QUIT if PM’s aide does not go as another medic says she wouldn’t have ‘dreamed of travelling the length of country to sort out some child care’

A doctor has said that he will quit his job if Dominic Cummings does not go and another medic has hit out at the Downing Street aide for travelling to Durham during lockdown.

Dominic Pimenta said the Government aide ‘spits in the face’ of the NHS in a furious tweet then told Good Morning Britain that he’s ready to resign if Cummings stays in his position as the top Government aide.

It comes as the senior advisor faces allegations of travelling three times during lockdown despite Boris Johnson instructing the public to stay at home.

Dr Pimenta said on today’s show: ‘It’s incredibly insulting to myself to the NHS staff and frankly to everyone in this country who’s lost loved ones,’ adding: ‘It’s unacceptable and I will not accept it.’

It came after he tweeted a picture of himself wearing personal protective equipment, saying: ‘This stuff is hot and hard work. Haven’t seen my parents since January. Frankly, Cummings spits in the face of all our efforts, the whole NHS. If he doesn’t resign, I will.’

Another medic, Dr Claire Redmond, said that she wouldn’t have even considered travelling the lengths that Cummings did.

She told BBC Radio 4 that her husband and she both suffered through Covid-19 and made it their priority to isolate despite having children.

It comes as the Prime Minister last night claimed that Cummings had acted responsibly and as any father would by driving up to his parents’ home while he and his wife were symptomatic to guarantee that they would have childcare. 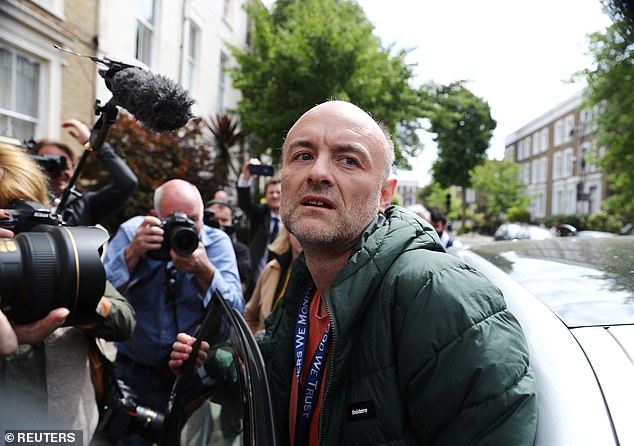 Mr Cummings (pictured today in London) has been accused of repeatedly travelling 270 miles from London to Durham (above) to see his parents, while the public were told to stay at home 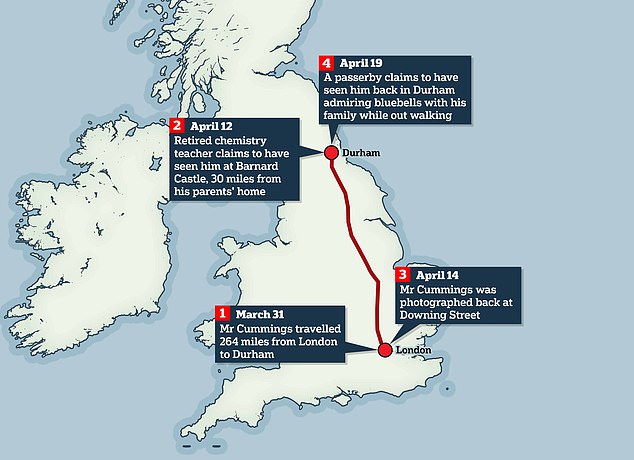 Dr Redmond said: ‘I think that our main concern at the time when we both knew we had to self-isolate with our three children and what we thought our responsibilities were at the time was very much that we must absolutely isolate ourselves and not spread this virus to anyone else as far as possible.

‘We went to great lengths to do that and I don’t think I would have dreamed of travelling the length of the country to sort out some child care.’

She added: ‘We looked at all the possible alternatives and in the current scenario I haven’t felt reassured that the MPs and the PM have explained that Dominic Cummings and his wife did consider every alternative.’

Boris Johnson was facing a furious Tory backlash at all levels of his party last night after he attempted to mount an extraordinary defence of Dominic Cummings. 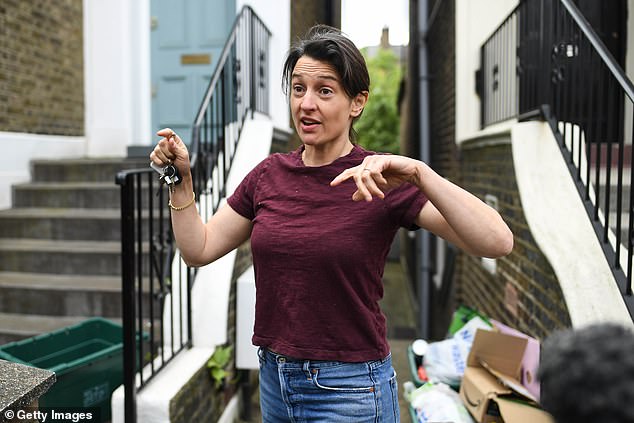 At a dramatic press conference in Downing Street, the Prime Minister claimed his chief aide had acted ‘responsibly, legally and with integrity’ while making a controversial 260-mile trip from London to Durham during lockdown.

Mr Johnson insisted Mr Cummings had ‘followed the instincts of every father’ by driving to his parents’ farm after his wife developed symptoms of coronavirus.

But he refused to deny that while in the North East, Mr Cummings had also driven 30 miles to go for a walk in the countryside in an apparent second lockdown breach.

And he failed to say whether he had given Mr Cummings permission for the Durham trip – or offer any apology for his most senior aide’s behaviour.

The PM decided to throw a protective arm around Mr Cummings after crisis talks with his mercurial adviser, in Number.

Attempting to draw a line under the affair, the PM said Mr Cummings had acted ‘with the overwhelming aim of stopping the spread of the virus and saving lives’.

Mr Johnson said his adviser had ‘followed the instincts of every father and every parent’ in travelling to a place where he could get help caring for his four-year-old son if he and wife came down with the virus at the same time.