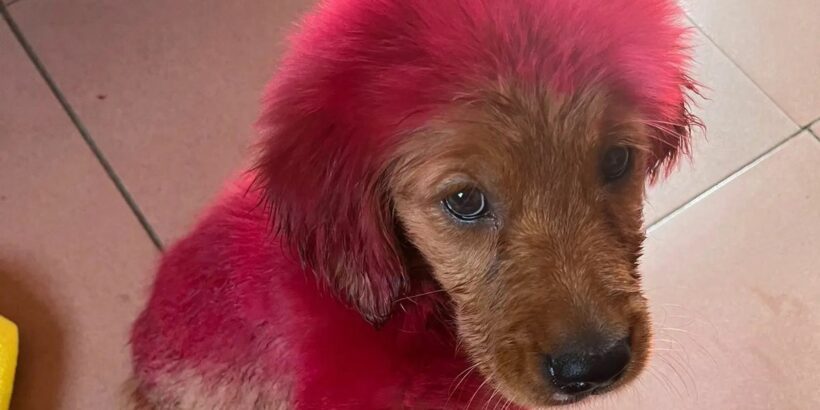 A Chinese dog owner has caused controversy after dying his golden retriever scarlet and showing him off on social media.

A video shows the owner, from Guangzhou, Guangdong Province in southern China, holding the dark pink pup and making him face the camera.

Traces of the dog's former hair colour can be seen in and around the eyes of the dog, who looks less than impressed at his rather novel makeover.

In another clip, a pair of black glasses also appear to have been painted onto the pet as the person recording breaks out on laughter and then the dog is also dragged along the floor to give a full view of his transformation.

The strange clips provoked a lot of reaction online, with some concerned for the dog's health and whether hair dye might cause issues for him in the future.

The dog owner, who is covered in tattoos, said he had spoken to a vet prior dying his pet, with the vet assuring him that the dye would be completely harmless.

One person on social media commented: "All right now, all the dogs in a radius of 10 miles are coming to laugh at him" while another asked "How long does it take for this to fade?"

China has few rules regarding animal welfare, with punishments for inflicting harm on pets extremely rare.

"Regardless of what others may tell you about the successes they have had, it is generally a bad idea to use human products on pets. Therefore steer well clear of any human hair dyes," they say on their website.