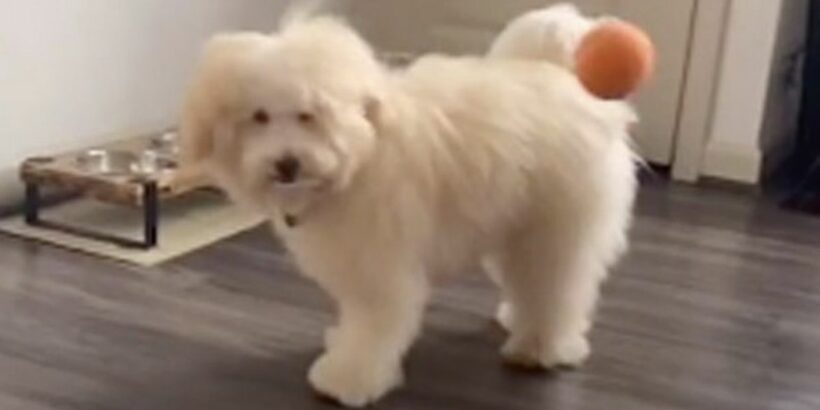 It is not just humans who can get their haircut all wrong, with one hilarious video going viral showing how one dog ended up looking like a classic horror movie character.

Fluffy pooch Bear was all ready to go on his first trip to the groomers.

In a TikTok video shared by his owner, who goes by the username @yessieyass, the dog is first filmed before his fateful trip.

“We hoped Bear’s first trip the groomer would go well,” the owner wrote across the screen as Bear bounds across the floor with his full coat of fur.

The screen then cuts to the post-haircut look – and it’s fair to say it didn’t go to plan.

Bear’s fur on his body has almost entirely been shaved off and his pink skin is visible.

But more bizarrely is how his ear’s still look fluffy despite his face also being shaved.

As his owner says, it leaves the poor pup looking like “the clown from IT” – aka Pennywise the Clown from the Stephen King classic.

She even shared a snap of the pooch sitting all sorry for himself in the car.

The video has been seen more than 80,000 times since being shared yesterday (April 26) and has sparked a wave of comments.

“Omg, why they leave the ears like that,” one laughed.

Another commented: “This is a tragedy but also I cackled.”

A third added: “Omg the way Bear looks so sad in the car.”

The owner replied: "That photo kills me, like what's got you so down buddy.

"Is it the fact that you're hairless now?"

But plenty of others noted how the groomer was likely given no choice but to shave all the fur off as it would have grown heavily matted.

Many urged the dog owner to comb the dog more frequently, to which she replied: “I am aware the groomer had no choice since he had a large matte but that doesn’t mean I can’t laugh about how ridiculous he looks now.”

It comes after another dog owner was horrified to see his pooch return from the groomers “looking like a raw chicken”.

And one pooch was transformed into “Sid from Ice Age” after their haircut fail.

To find out the best groomers, walks and treats for your furry friends, visit the 'TeamDogs' website here.