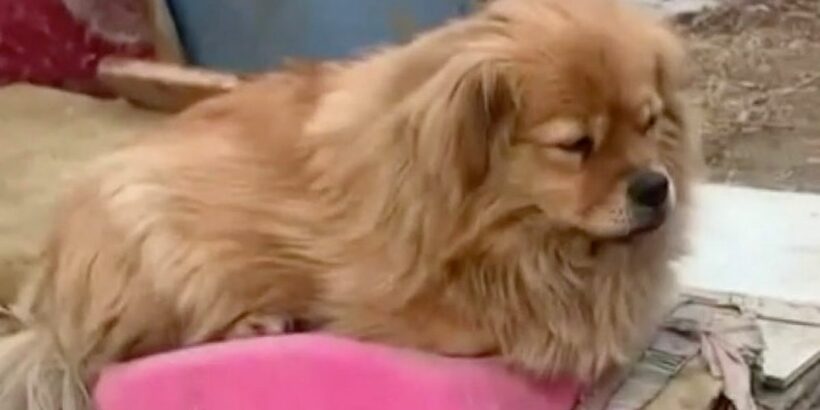 A loyal dog has been living by his former owner's work place and waiting for his return since the pensioner passed away five years ago.

The adorable pooch, known as Da Huang – which means "Big Yellow" – due to his fur colour, even ran away from kind-hearted neighbours who tried to adopt him and take him home.

Da Huang has been compared to the Japanese dog Hachiko which waited for its owner at the train station every day for nine years after his death.

The animal was a stray dog before he got rescued by Mr Shen, who worked as a security guard at a car park in the Huanggu district of Shengyang city, northeastern China.

Over the years, he stayed with Mr Shen by the security booth and became a guard dog.

Sadly Mr Shen died of cancer in 2015 and Da Huang has since been patiently waiting for his return at the car park every day.

Nearby neighbours have built him a kennel and fitted it with old cushions and clothes.

Heart-wrenching footage shared on social media captures the canine braving the cold in outdoors while looking over the entrance.

Whenever there is a man walking past, Da Huang runs towards him as if to check if he is Mr Shen.

Then he returns to the same spot and waits for the next person.

A nearby resident told China News: "Da Huang has been living there for the last five years.

"He refused to get adopted. You can be friends with him but he will never treat you as his owner.

She added that Da Huang would be alerted to man in a similar body frame as his owner.

"Da Huang will become alerted if there a tall, skinny man walking past," she explained. "But his vision is getting worse.

"You can see the disappointment from his eyes and understand how lonely he is. It's a sad story."

The neighbours have been feeding Da Huang and gives him a bath from time to time.

The video has left viewers were in tears, with many calling Da Huang the "Hachiko in Liaoning".

One said: "Poor little dog. This reminds me so much of Hachiko's story. What a loyal dog!"

Another commented: "Please take care of Da Huang and don't let the dog thieves take him away."