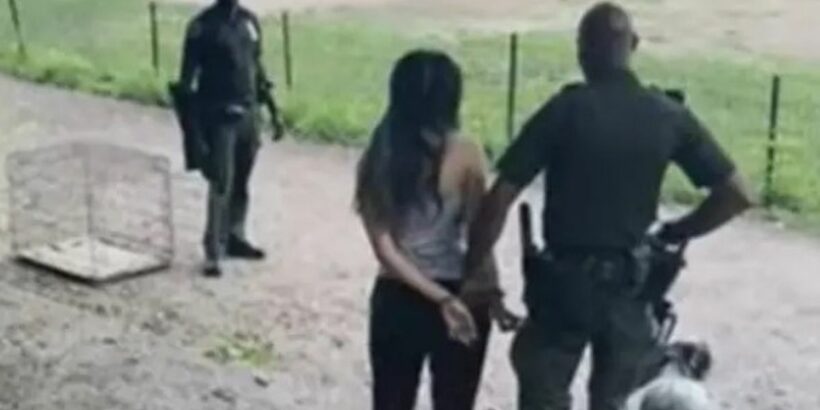 A woman was shocked to find herself in a police holding cell after walking her dogs without leashes through a New York park.

Dora Marchand, 29, told West Side Rag that she was handcuffed for nearly two hours in Riverside Park in August.

Marchand, and her Australian Shepherds Comet and Sophie, had only moved to New York in the previous week so she was unaware of the park's pooch-related restrictions.

A Parks Enforcement Patrol officer approached her as she was on her way home. Marchand said that: "He called me over and said this isn’t allowed, you need to have dogs on the leash. I said I was sorry and that I was about to go home."

Just as the first officer was about to let her off with a warning, Marchand said that another approached keen to give her a ticket.

She continued: "I gave him my name and birthday but could not remember my address since we just moved. I offered to go home and get my wallet but he said that isn’t how it works.

"He said I was under arrest for not giving out my address and put me in handcuffs."

Richard Baron Penman, a witness who captured footage of Marchand's arrest, said: "It was disturbing how they treated her like a dangerous criminal, pulling her around by the handcuffs. It was so unnecessary."

More officers eventually arrived with cages and electric sticks and tried but failed to capture Comet and Sophie alongside their owner.

The dogs managed to avoid having their paws in cuffs as a passerby helped Marchand contact her boyfriend. He arrived with leashes and his partner's ID, but it wasn't enough to save her from being taken to a police station.

Marchand told the New York Post that she was treated like a "real" criminal at the precinct, placed in a holding cell and forced to remove her shoes and strings from her pants.

She also said that NYPD officers mocked the parks officer who had brought her in: "They were kind of all laughing like, 'This is not fascist Germany, we don’t arrest people for not having dogs on the leash'."

A spokesperson for the Parks Department said that Marchand "refused to comply with the rules" and "became confrontational". Both Marchand and the witness deny that she was confrontational.