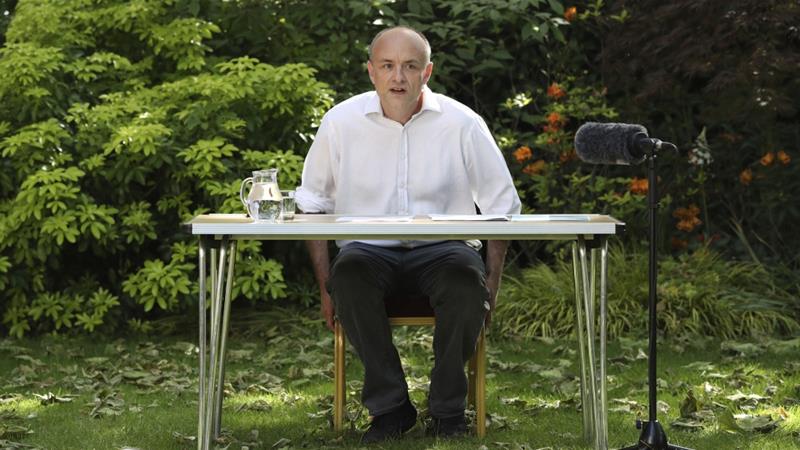 London, United Kingdom – The anger in the United Kingdom is palpable. It has been days since the breaking of lockdown rules by the prime minister’s most senior adviser was first reported, but the incandescent rage is still burning white-hot.

It has been fuelled by the abject refusal of Dominic Cummings to resign, as well as the framing of the government’s response, as leading figures in the Conservative Party insisted he had done nothing wrong by travelling 400km (260 miles) with his wife and child to his parents’ home, while his wife was ill, and while he was convinced he had coronavirus, ostensibly to make sure their four-year-old son had access to childcare.

On Monday evening, Cummings struck a conciliatory tone while giving a statement to the media, though he refused to apologise.

“I know people are suffering, thousands have died and many are angry about what they have seen in the media about my actions,” he said.

He said he had made the trip at the end of March as his home in London had become “a target” after reported comments he opposed introducing the lockdown in order to build “herd immunity”, and did not want to expose his wife and child to hostility while the family was ill.

“I did not oppose it, but these stories had created a very bad atmosphere around my home, I was subjected to threats of violence, people came to my house shouting threats, there were posts on social media encouraging attacks.”

At his parents’ farm estate, he said he stayed in a cottage that was 50 metres (164 feet) from the house in which his parents live, and maintained social distancing from them. He did not make the trip public, nor did his wife mention it in a newspaper column, in which she talked of self-isolating in London, in order to protect his parents’ home from becoming similarly targeted by media and political opponents.

“My parents are in their 70s. Obviously, I did not want to give them this disease. And so we stayed very far away,” he said.

He said he made no efforts to find out if anyone living near his home could have helped.

“I did not think it was reasonable to ask friends in London to look after my son,” he said.

Cummings said he exercised his judgement regarding the interpretation of the rules, and added he had not offered to resign.

Cummings said: “If you have got a child that’s four years old and neither of you can look after him, the guidance doesn’t say ‘you have just got to sit there’.

“So I think I have behaved reasonably given the circumstances and the different things I had to try and weigh up.”

Prime Minister Boris Johnson only served to turn up the heat on the public anger on Sunday, saying: “I think any father, any parent, would frankly understand what he did – and I certainly do.”

The UK’s lockdown rules have led to elderly people dying without their relatives, families being unable to take part in funerals of loved ones; countless stories of grief multiplied because it could not be shared.

Ismail Mohamed Abdulwahab was just 13 years old when he died, alone, in a hospital bed. His family were unable to be by his side in his final moments because of the strict social distancing guidelines.

Official guidance states: “If you or someone you live with has symptoms of coronavirus, do not leave your home for any reason – if you need food or medicine, order it online or by phone, or ask someone to deliver it to your home.”

Calls for Cummings’ resignation have been widespread.

“I can understand why Johnson might insist on hanging onto Cummings: an ongoing bromance founded on political scheming, debts owed to Vote Leave from 2016, even Cummings’ hold on information that could damage the prime minister,” Scott Lucas, a professor of international politics at the University of Birmingham, told Al Jazeera.

“What I can’t understand is the brazen, dismissive manner in Johnson and Cummings’ statements.”

On Monday morning, a top police official in Durham, the county to which Cummings travelled, called for a full, formal investigation. Cummings, along with his wife and child, also made a trip to a nearby tourist town on his wife’s birthday – purely, he said, to check if he was fit enough to drive back to London the following day.

It is this apparent contempt for the rule of law that lies at the heart of fears the nation’s lockdown rules are now unenforceable, or at the very least the government’s own scientific-led public health messaging has been fatally weakened.

“This development seriously undermines public trust in UK government advice at the current time,” Professor Linda Bauld, chair of public health in the Usher Institute at the University of Edinburgh, told Al Jazeera.

“It suggests one rule for the privileged and another for the rest of us. It also sends the message that individual judgement can be applied to decide to what extent we should follow public health guidance.

“We are already hearing from the police that this case is being used as an excuse by those gathering in groups and not maintaining social distancing. At a time when it is imperative that we continue to reduce the spread of the virus, such high profile mixed messages could cost lives.”

I’m 84. I’ve been in active politics since 1950. I’ve seen a lot – but I’ve never seen a government so corrupt and incompetent as this one. pic.twitter.com/rnco89nfyt

Deeply grateful for my colleagues who have said what I feel too.

Unless very soon we see clear repentance, including the sacking of Cummings, I no longer know how we can trust what ministers say sufficiently for @churchofengland to work together with them on the pandemic. https://t.co/3WsJWUrnVZ

When you have the Church of England, the police, and the Daily Mail against you, it’s probably time to review your decision.

It’s that time again. A mumpsimus (16th century) is someone who refuses to budge/insists that they are right, despite clear evidence that they are wrong. Plural: mumpsimuses.

If his judgement is questionable and the PM keeps him on, then the PMs judgement will be brought into question. He’s become a dead weight dragging the UK Government down.
This is why the PM can’t keep him much longer.#CumSack https://t.co/KcJbFblFVM

Johnson’s reticence – not only to fire Cummings, but to embrace him – was “defending the indefensible”, and raised questions over his own continuing viability as prime minister, said analysts.

“Number 10 has badly misjudged the public mood in relation to Dominic Cummings,” Mark Shanahan, head of the politics department at the University of Reading, told Al Jazeera.

“Clearly Johnson and his inner cabinet, largely ranged around Michael Gove, saw this as a story within the Westminster bubble that would wane within one or two news cycles. It hasn’t. This matters to a nation diligently locked down since March – a nation prepared to sacrifice everything to keep the dreaded R-number down.

“[Cummings’s] actions have touched a raw nerve. But his reaction to being caught – arrogant entitlement – is what has really grated. But this could have been contained with a quick sacking or forced resignation. But Boris Johnson did neither. Instead, he and the Number 10 machine have put all their energy into defending the indefensible.

“The story has been spun in ever more ways and ever less convincingly, culminating on Sunday evening with the political weaponising of a child. This is politics at its worst and has shown the prime minister to be weak. He has hitched his wagon to a very sick nag. It is unlikely that Cummings will survive in post. It is unclear if Johnson, with or without his Svengali, has any long-term political future either.”