MPs are launching a bid to find a Brexit campaign chief in contempt of Parliament for refusing to answer their questions about the EU referendum campaign.

Dominic Cummings was the director of Vote Leave – which was fronted by Boris Johnson and Michael Gove – and widely seen as the brains behind its success.

But he has refused to give evidence to the Culture, Media and Sport Select Committee, which is investigation alleged wrongdoing in the referendum campaign.

The committed has reported Mr Cummings to the parliamentary authorities, setting the ball rolling on a process which could find him in contempt of Parliament.

If he is eventually found in contempt than under antiquated rules he could in theory be imprisoned or fined for defying MPs. 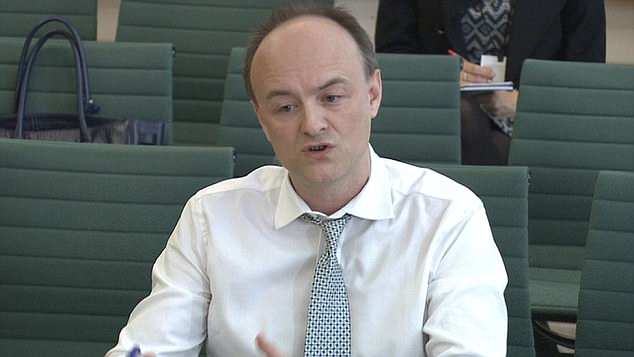 Dominic Cummings (pictured in Parliament) has refused to give evidence to the Culture, Media and Sport Select Committee, which is investigation alleged wrongdoing in the referendum campaign

But neither of these sanctions have been used and it is more likely he will get a slap on the wrist from the parliamentary authorities.

What can happen to someone found in contempt of parliament?

MPs have the power to hold people in contempt of Parliament if they defy them.

Strictly speaking, individuals found in contempt could be fined or veen imprisoned.

But both these sanctions have not been used in many years and the more likely outcome is that they will get a slap on the wrist by Parliament.

Two News International executives found in contempt over misleading evidence to a select committee were admonished by the House in 2016.

Mr Cummings hit back at the move, accusing MPs of ‘grandstanding’ in taking the steps.

The rows is the latest twist in the ongoing saga which has seen Brexit campaigners accused of flouting electoral rules in the EU referendum campaign.

The select committee is probing claims made by Cambridge Analytica whistleblower Christopher Wylie that the Facebook data of millions of users was illegally harvested and used to sway the Brexit vote.

Damian Collins, chairman of the culture select committee, has repeatedly requested that Mr Cummings come before his committee to answer questions about how the campaign was run.

Mr Cummings has refused to give evidence, but said he will after once an Electoral Commission inquiry into the conduct of the 2016 EU referendum was over.

He claims that lawyers have advised him to ‘keep my trap shut’ until the conclusion of an Electoral Commission probe, but was happy to give evidence after this.

The issue of a summons amounted to the committee ‘demonstrating their priority was grandstanding PR, not truth-seeking’, he said. 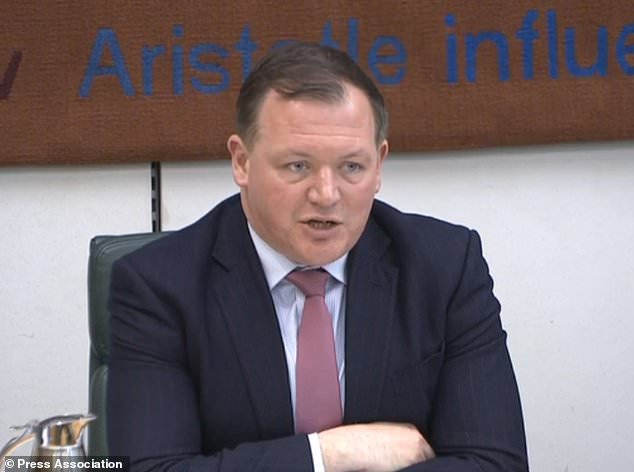 He added: ‘I said that if they issued a summons instead of discussing possible dates like reasonable people, then it would be obvious they are not interested in friendly co-operation to uncover the truth.

‘So I will not give evidence to this committee under any circumstances. I may to other committees depending on behaviour.’

What are the accusations against Cambridge Analytica?

Who are Cambridge Analytica?

The firm, which has offices in London, New York and Washington, boasts to clients that it can ‘find your voters and move them to action’.

What are their ties to Aleksandr Kogan?

The controversy centres around their use of the GSR app, developed by the Cambridge University research Dr Aleksandr Kogan.

Facebook users used the app to answer a personality survey which plundered the data of 100million users.

How was Cambridge Analytica  used in the Brexit and Trump campaigns?

It has been claimed that Cambridge Analytica used the information to assess peoples’ personalities and come up with political strategies to sway voters to back Brexit and Donald Trump.

The firm has insisted it did no actual work for the Brexit campaign – although it did pitch for work with Leave.EU.

But whistleblowers say that Arron Banks – the co founder of Leave.EU – used the ideas gleaned from the itch to pursue his own CA-style model to predict and influence voters’ behaviour in the EU referendum.

Cambridge Analytica suspended its chief executive, Alexander Nix, after recordings emerged of him making a series of controversial claims.

Why was Vote Leave embroiled in the scandal?

It is also claimed that campaign chiefs at Vote Leave – the official pro Brexit campaign group – may have broken the law in the campaign.

It is claimed that they donated £650,000 to the other pro Brexit group BeLeave in the final days of the campaign and told them to spend it on data advertising by the Canadian firm Aggregate IQ – breaking election rules.

Mr Collins said Mr Cummings had been issued with a formal summons to appear on May 22 and answer questions about the conduct of the Vote Leave campaign.

He added: ‘We are disappointed that Dominic Cummings has not responded positively to our requests for him to appear.’

The Tory MP dismissed Mr Cummings’ claims lawyers have told him he cannot give evidence – pointing out that Cambridge Analytica boss Alexander Nix and AIQ boss Jeff Silvester have both agreed to give evidence.

Mr Collins added: ‘Reporting the matter to the House is a first step which could result in a decision that a contempt of Parliament has been committed, a very serious outcome for the individual.’

The row comes as it emerged that Mr  Nix has agreed to return to Parliament to give evidence about alleged misuse of Facebook users’ private data.

Mr Nix appeared before the committee in February when he denied any involvement in the referendum beyond ‘exploratory’ discussions with rival Brexit campaign Leave.EU.

But the committee later summoned him to return to explain ‘numerous inconsistencies’ in his evidence, and he will face a further grilling at Westminster on June 6.

Cambridge Analytica has been accused by whistleblowers of misusing millions of Facebook users’ personal data to target ads in Donald Trump’s campaign for the US presidency.

The company folded earlier this month amid massive controversy over its methods.

The Canadian firm’s chief operating officer Jeff Silvester told the committee on Wednesday that it had previously worked for CA’s parent company SCL, but denied any link with CA itself.

A report from the DCMS Committee could result in a debate in the House and an inquiry by the Commons Privileges Committee.

That committee could recommend further action, but only the House itself can impose sanctions.

It is not clear what punishment the House could impose if it decides Mr Cummings is in contempt.

In theory, the Commons can order imprisonment or issue fines, but neither of these sanctions has been used for years and a 2012 report said its powers were ‘untested in recent times’.

Two News International executives found in contempt over misleading evidence to a select committee were admonished by the House in 2016. 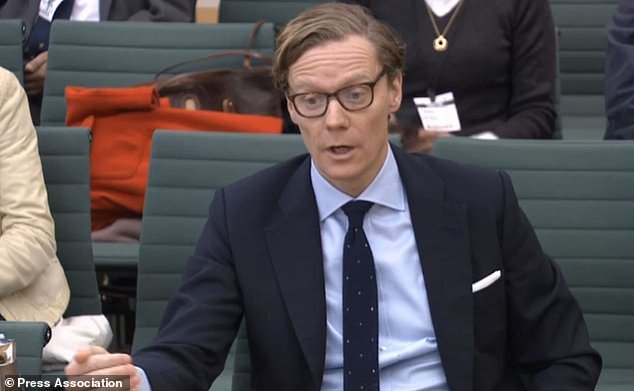 Alexander Nix, the ex head of Cambridge Analytica, which closed in the wake of allegations it harvested the data of many millions of Facebook users to influence how they voted, will give evidence to the committee again