Plot to take control of Brexit revealed: Remainer rebel Dominic Grieve unveils amendment to give MPs power to stop No Deal by extending or revoking Article 50 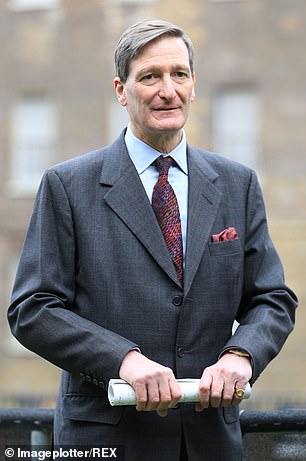 Tory Dominic Grieve, pictured on Monday, is said to be working with a group of MPs, including Remain-supporting Labour rebels, to try and block a No Deal Brexit result

Plans to stop a No Deal Brexit by introducing a new amendment that would allow parliament to take control of the process have been revealed.

Tory Dominic Grieve is working with a group of MPs, including Remain-supporting Labour rebels, to try and block a No Deal result.

Under his amendment, a motion to stop No Deal could be put to Parliament if it is backed by 300 MPs. Legislation to stop No Deal by extending or revoking Article 50 would then be subject to a vote and would be likely to pass because a majority of MPs are against leaving the EU without a deal, according to Buzzfeed.

Traditionally only the government can propose legislation that changes UK policy and the move by Remain rebels is a challenge to the unwritten constitution on the UK.

Theresa May is due to address Parliament on Monday about Brexit ‘Plan B’ after her plan for leaving the European Union suffered a crushing defeat. A week of debate will then follow before MPs vote on their preferred Brexit option on Tuesday 29 March.

However this vote will have no binding power on May – and the plan by Grieve and his fellow Remainer backbenchers, from a range of parties, would be able to grab power from Theresa May’s government and allow bills to be considered.

It is thought that the group of MPs will meet on Monday to discuss the plan again.

A senior parliamentary source told Buzzfeed the MPs plan was an attempt to change the referendum result. 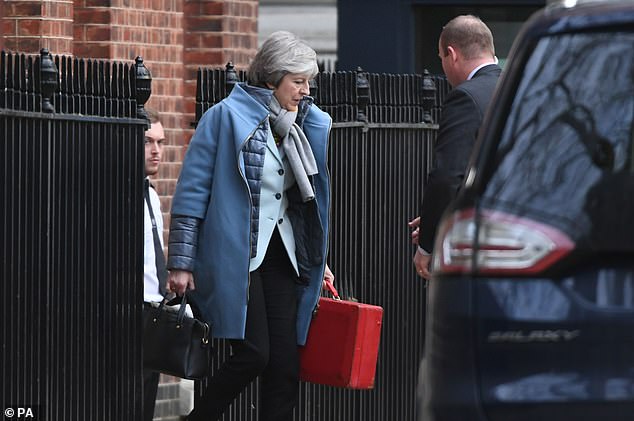 Mrs May held talks with rival political leaders, pictured yesterday at Downing Street, to try to come up with a Brexit Pan B

They said: ‘This is another example of centuries of procedure being overturned to suit an agenda that denies the referendum result.’

Last weekend, before the Brexit debate, it was revealed that the authority for drawing up a new negotiating plan could pass to a panel of backbenchers if Mrs May lost the vote.

The liaison committee, which is dominated by Remainers by a margin of 27 to nine, would be charged with coming up with a proposal supported by MPs.

The dramatic move would mean tearing up the Commons rule book – giving backbench MPs the power to propose legislation instead of the Government.

A senior minister described it as a ‘copper-bottomed, bullet-proof plan to sink Brexit’.

May’s cabinet has been at war this week as they clashed over Britain’s future.

Aid Secretary Penny Mordaunt – a Brexiteer – went public in defence of crashing out of the EU – arguing it is better than accepting a bad deal.

But Amber Rudd, the Remainer Work and Pensions Secretary, hit back online tweeting a link to a CBI warning about the dangers of no deal to business.

Other ministers – led by Business Secretary Greg Clark and Justice Secretary David Gauke – have warned no deal is so bad they would resign to stop it.

Mrs May has held talks with rival political leaders to try to come up with a Brexit Pan B in the wake of her humiliating defeat.

She held a ‘constructive’ calls with German Chancellor Angela Merkel and Dutch PM Mark Rutte last night, and is expected to have more calls with EU leaders in the coming days.

Theresa May has also been dealt an ultimatum by her divided cabinet with pro-Leave ministers warning her not to water-down the deal.

What is an amendment and what is a motion?

An amendment is a change to the wording of a Bill or a motion that is proposed by an MP or member of the House of Lords.

A motion is a proposal put forward for debate or decision in the House of Commons or House of Lords.

A motion must be proposed before any debate or vote can take place in Parliament.

The Prime Minister has been told by Brexiteers she ‘risks splitting the Conservative party’ if she compromises and tries to gain Labour’s support for her plan.

Mrs May has also faced questions from pro-EU ministers who want to vote on legislation that would mean Brexit isn’t possible on March 29 without a deal.

Labour’s conditions of support include pursuing a permanent customs union with the EU and removing the threat of leaving without a deal – which some Tory MPs would not be happy with, reports the Financial Times.

Mrs May faced rejection in the commons earlier this week when she was defeated by 230 votes – the biggest for a government in history, outstripping Labour in 1924.

However she defeated Jeremy Corbyn’s no-confidence motion by 325 votes to 306  after the DUP and Tory Brexiteers came back into the fold despite dealing her a humiliation on her EU deal the night before.

EU officials have said they will not reopen talks on the deal until the government has worked out what could be approved in commons.