The US President is staying at his Turnberry resort with Melania for the next two days before jetting off to Helsinki to meet Russia's leader. 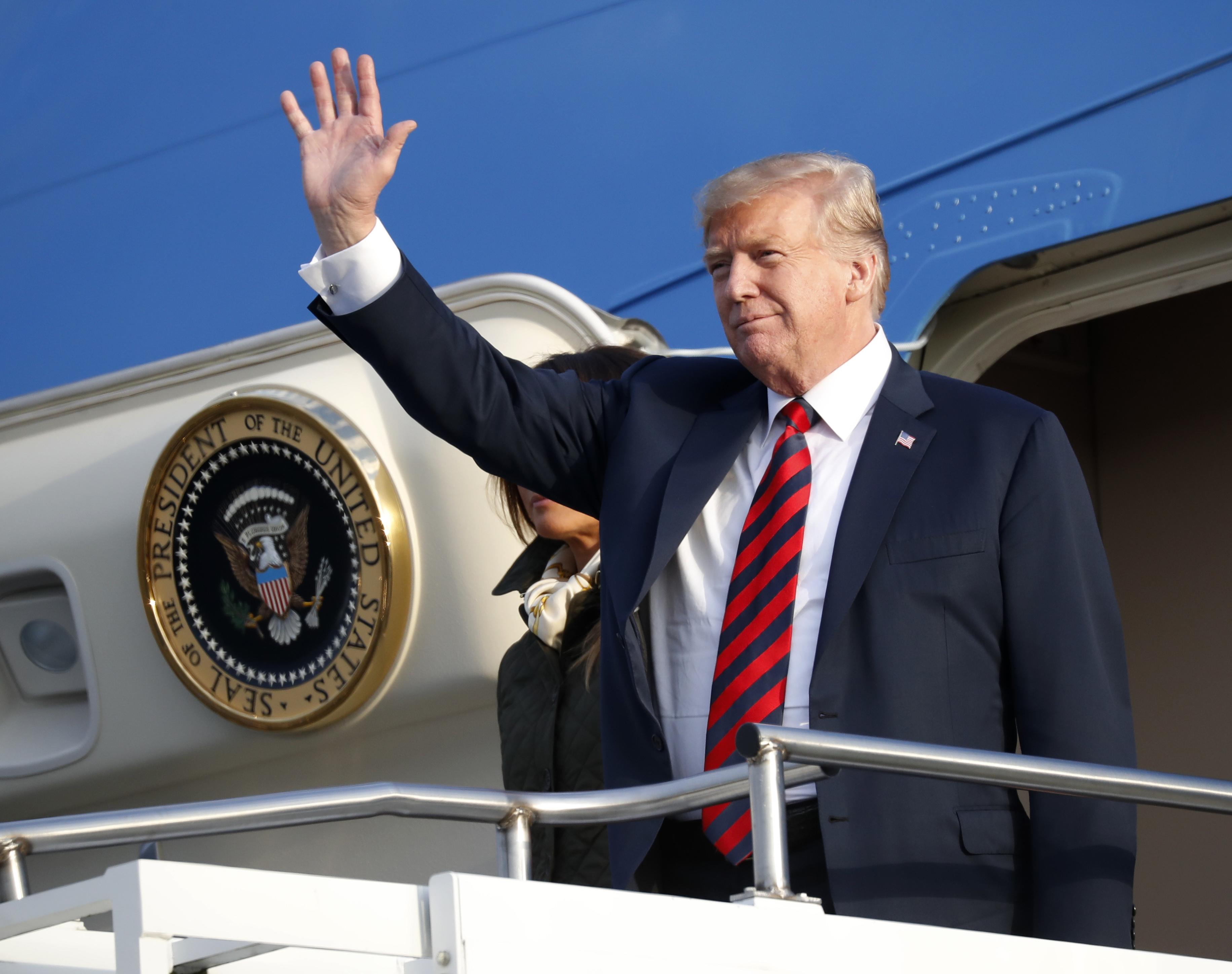 The pair will have talks in Finland on Monday morning, straight after an eventful trip to Britain.

Trump, whose mother was Scottish, tweeted this morning: "I have arrived in Scotland and will be at Trump Turnberry for two days of meetings, calls and hopefully, some golf – my primary form of exercise!

"The weather is beautiful, and this place is incredible! Tomorrow I go to Helsinki for a Monday meeting with Vladimir Putin."

The President's clubs were seen being taken off his private plane last night, fuelling rumours the President will go for a round of golf today while he visits his private resort. 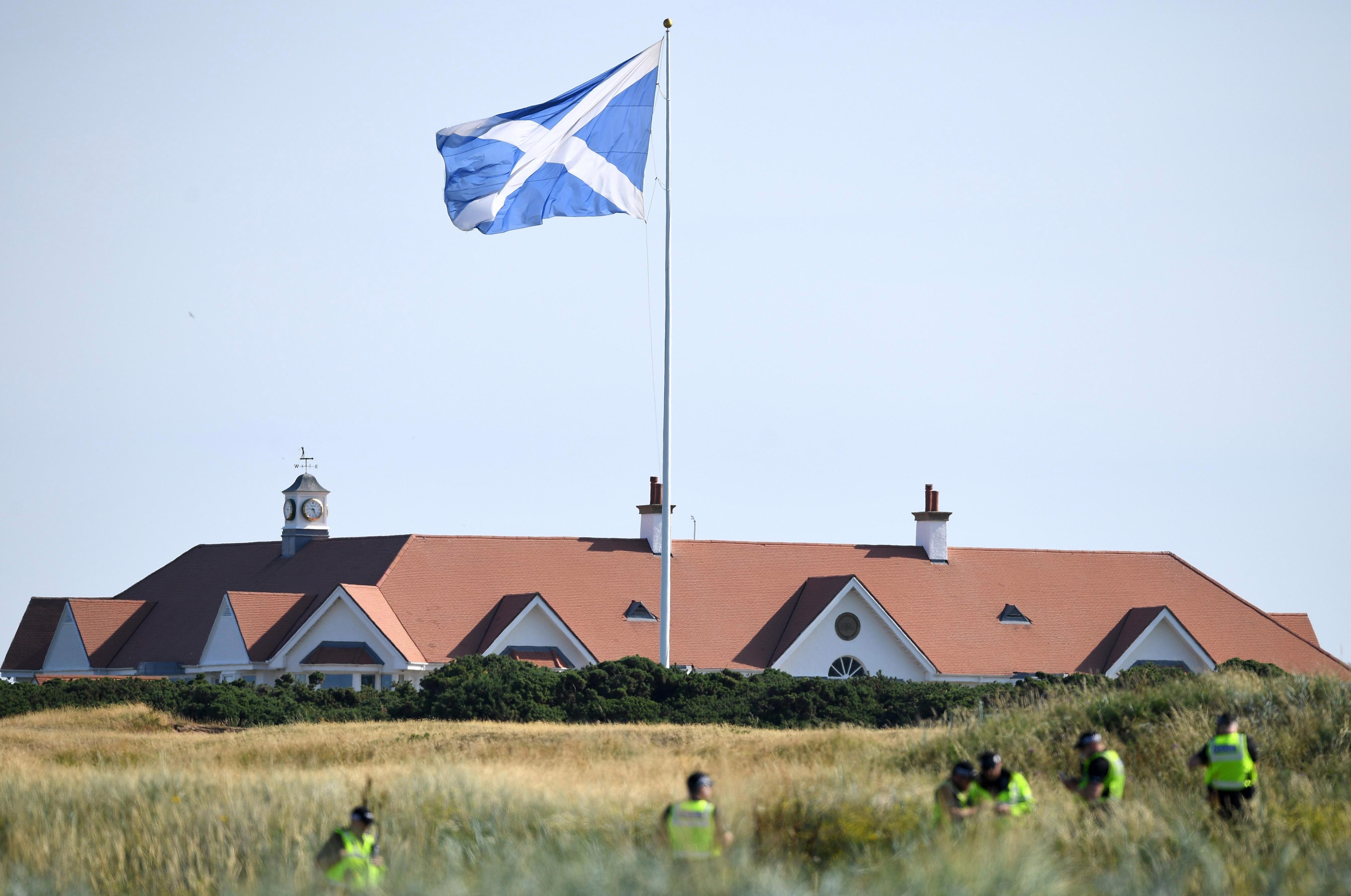 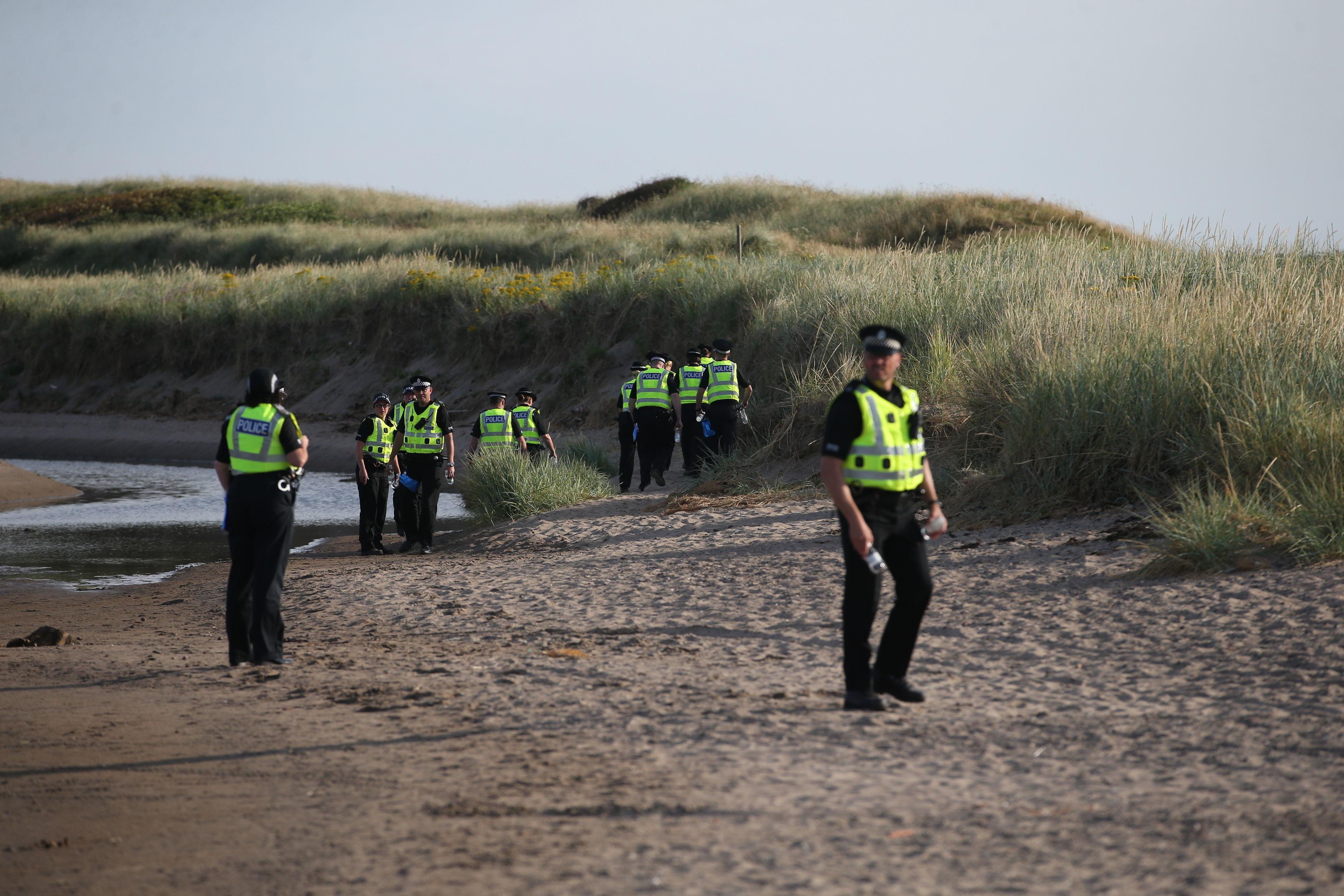 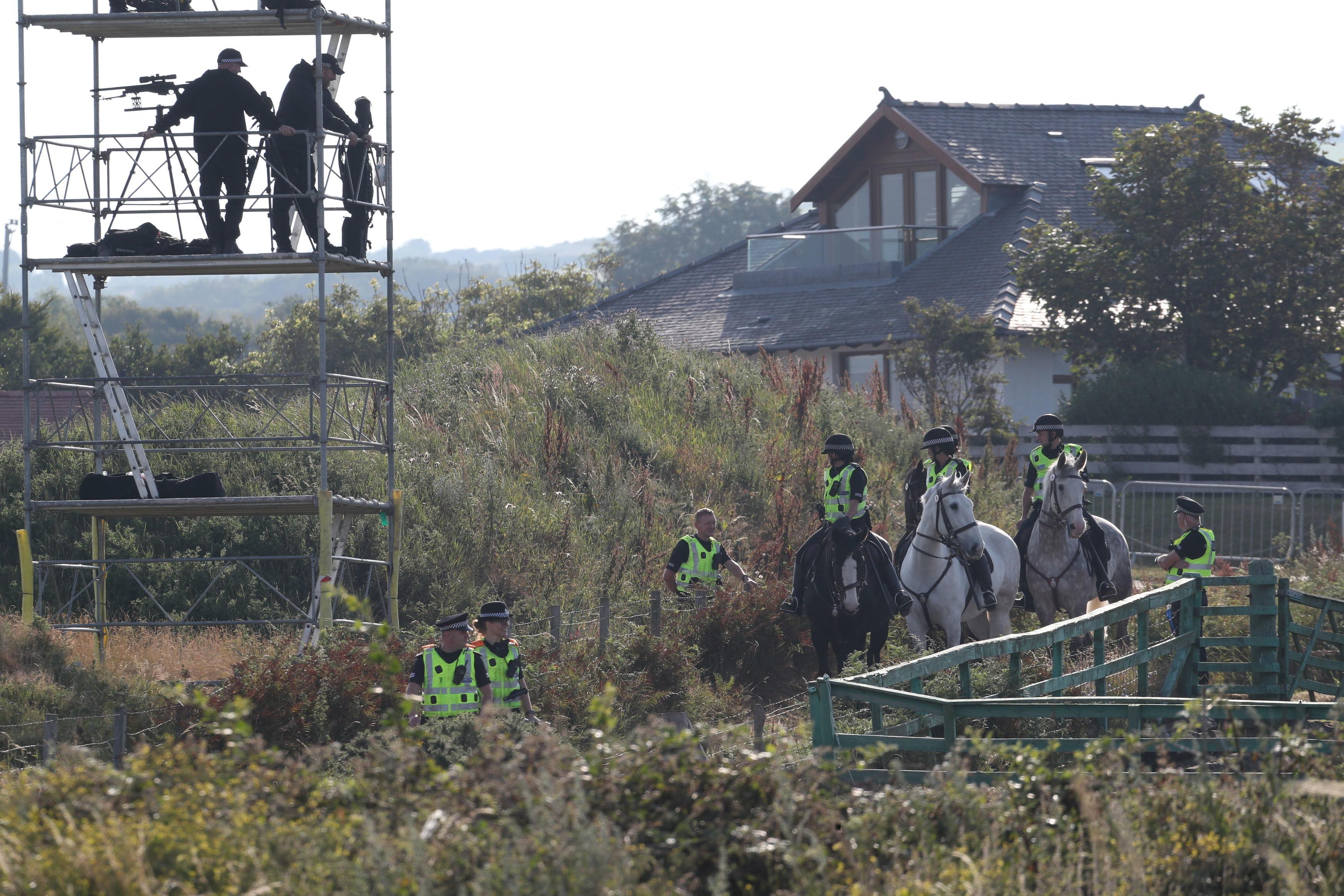 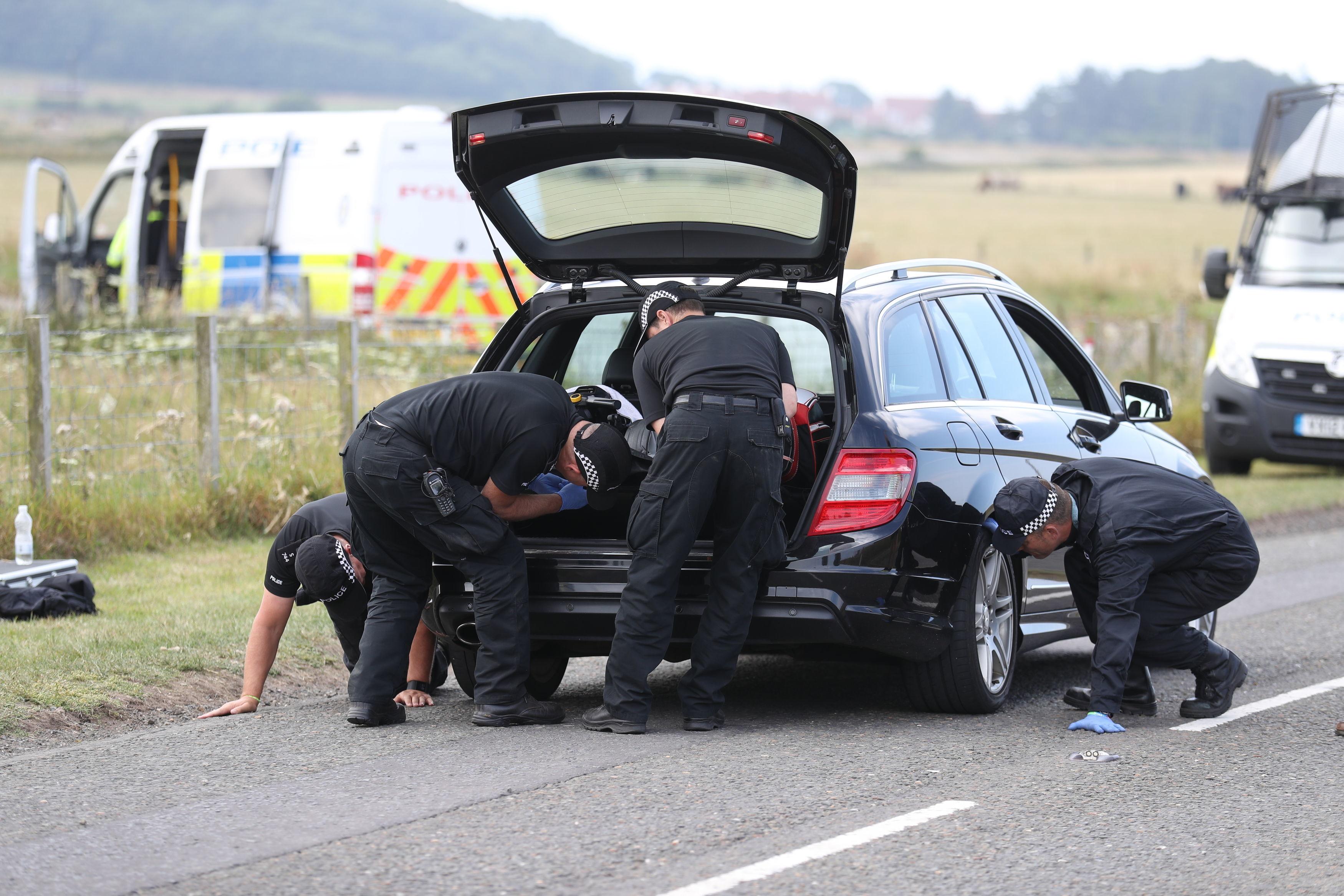 Security in the village of Turnberry is tight as Trump makes his first trip to Scotland as President today, but the two days are "private" and he's not expected to make any official stops.

He was greeted on the tarmac at Prestwick Airport by Scottish Secretary David Mundell, before travelling by car the 20 miles to his resort.

Police snipers are in prime position, accompanies by a major security operation to keep the President safe.

But last night a paragliding protester swooped within a few feet of Mr Trump's head – flying over the golf course.

The Greenpeace activist was flying with a sign emblazoned with the phrase: "Trump well below par". 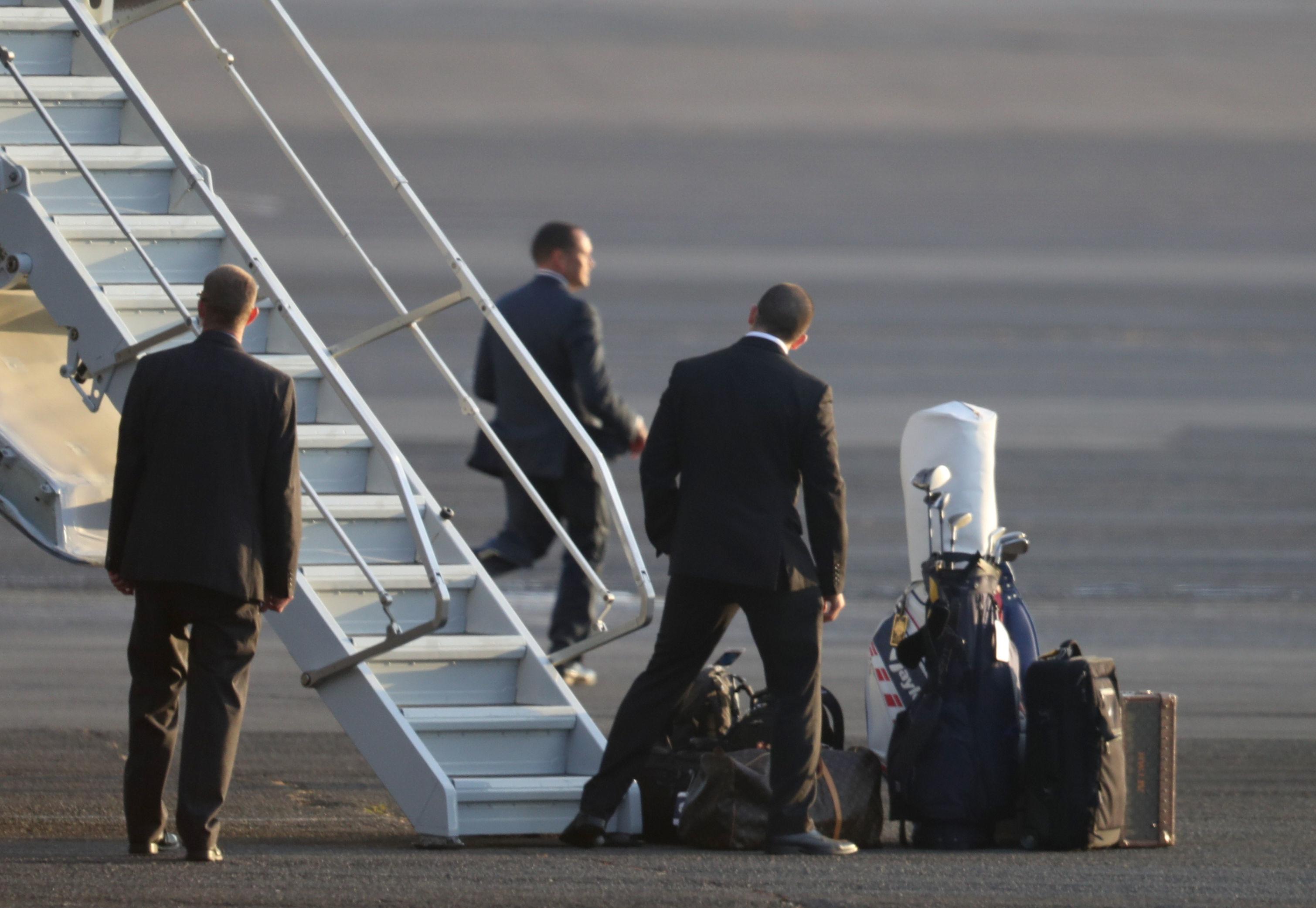 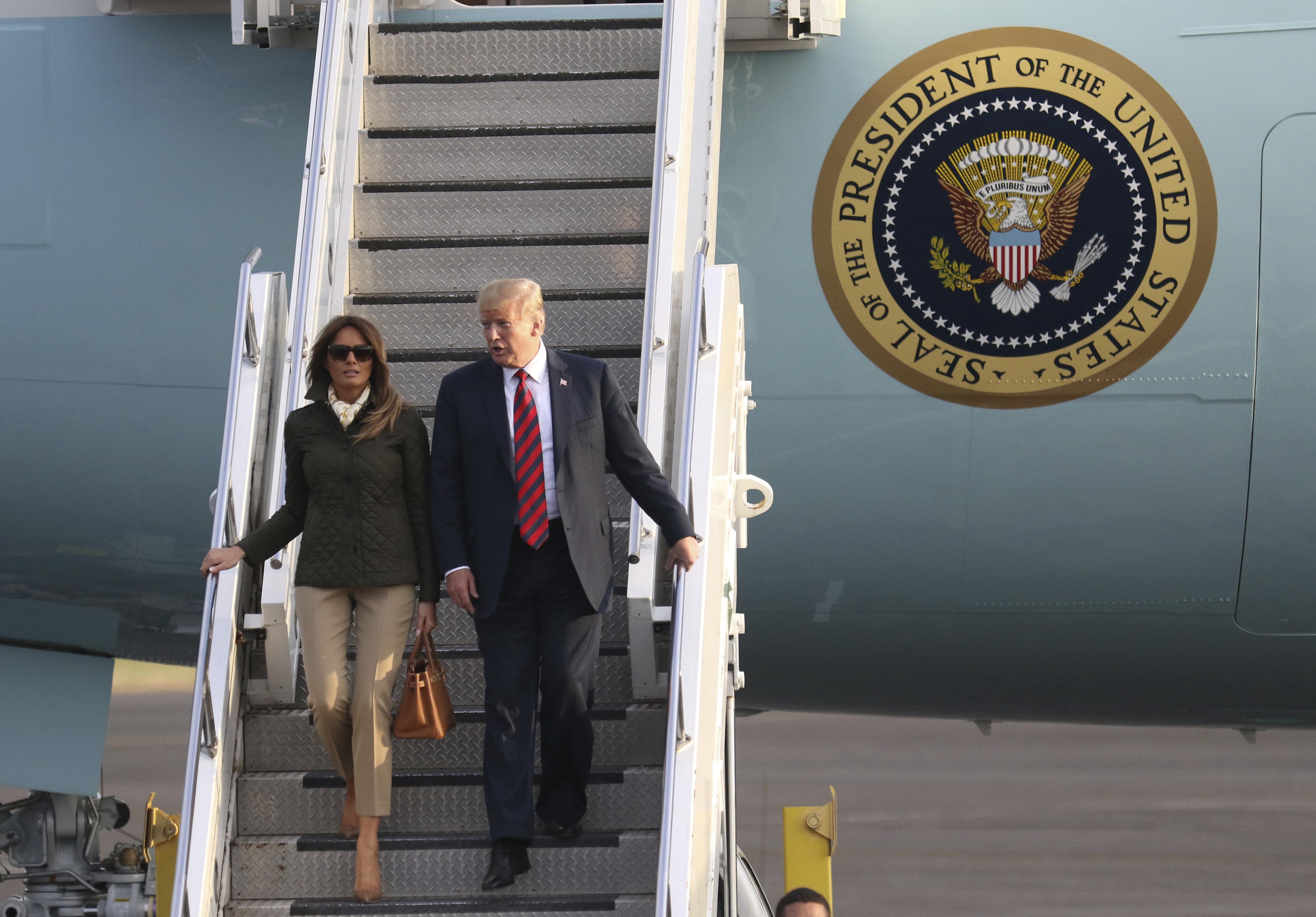 They were lucky not to be shot out the sky as the President's elite snipers aimed their guns at the aerial threat from the roof above.

The paraglider flew three miles across the Ayrshire countryside at 9.30pm – minutes after Trump arrived at the course

They then circled the lawn in front of the Turnberry hotel where the US President is staying for the weekend.

A Greenpeace spokesman said police had been informed of the protest ten minutes prior to it being launched.

Greenpeace also claim they contacted Prestwick air traffic control by telephone and radio to inform them about the paraglider’s arrival.

But officers say it was an offence and are seeking the pilot. 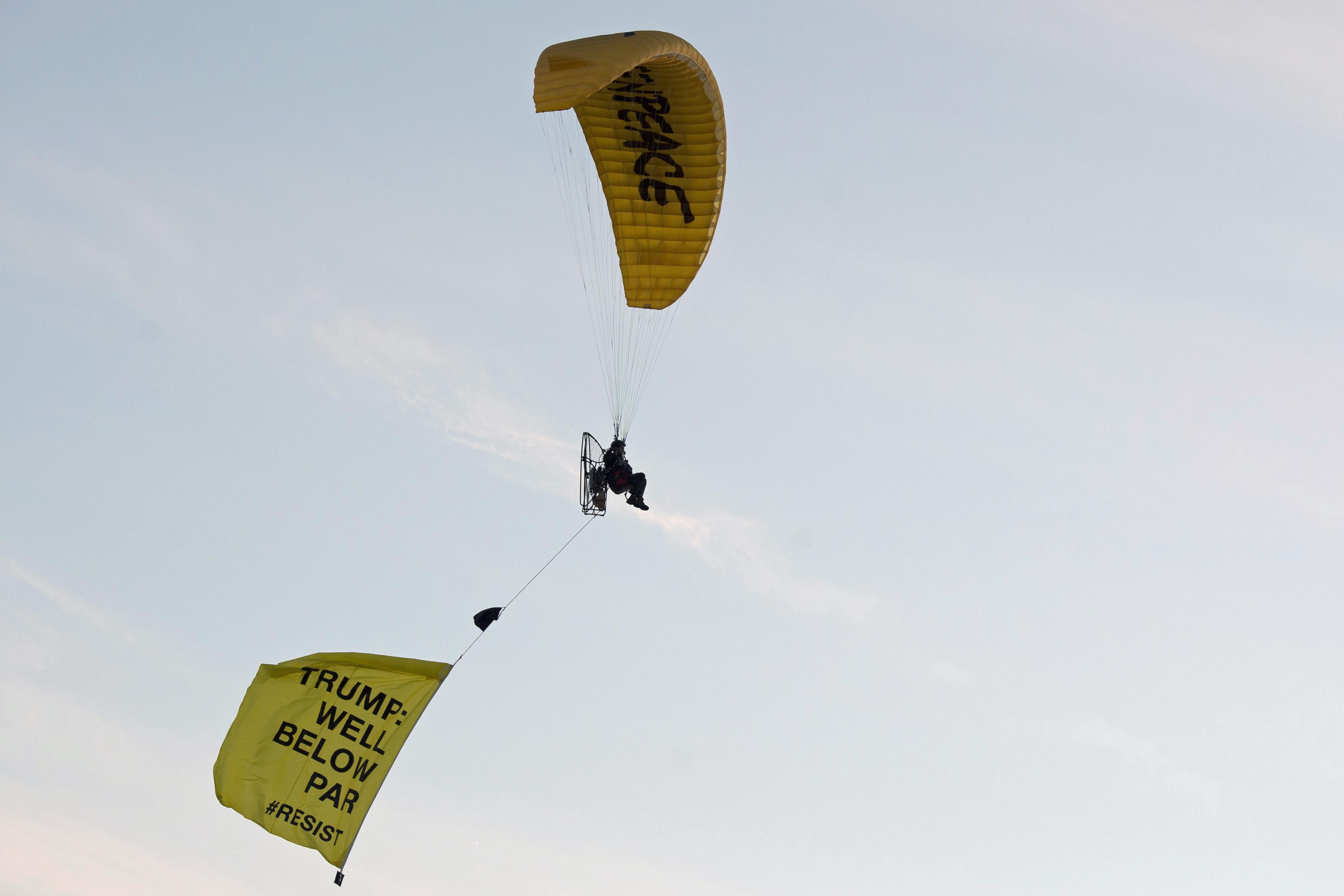 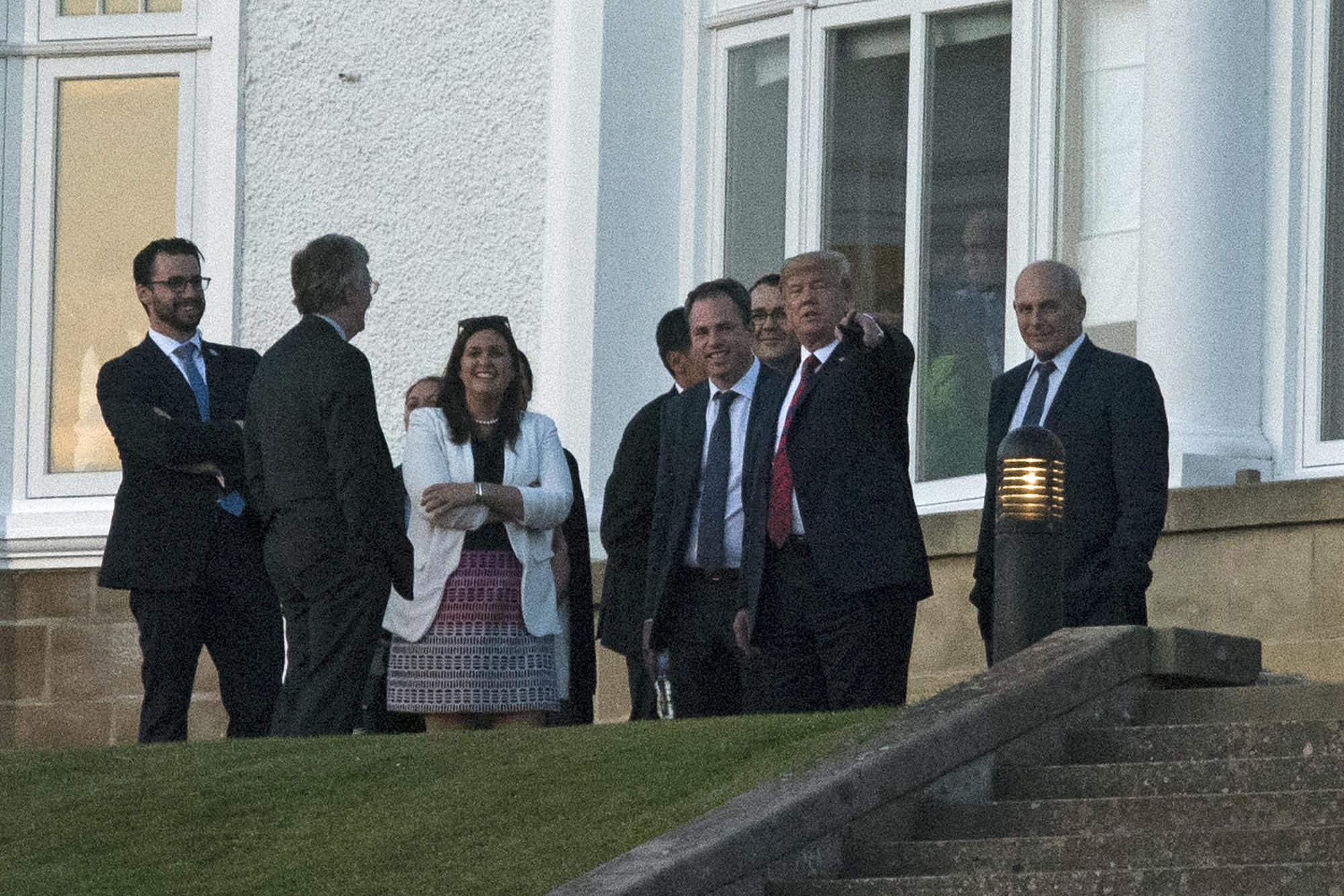 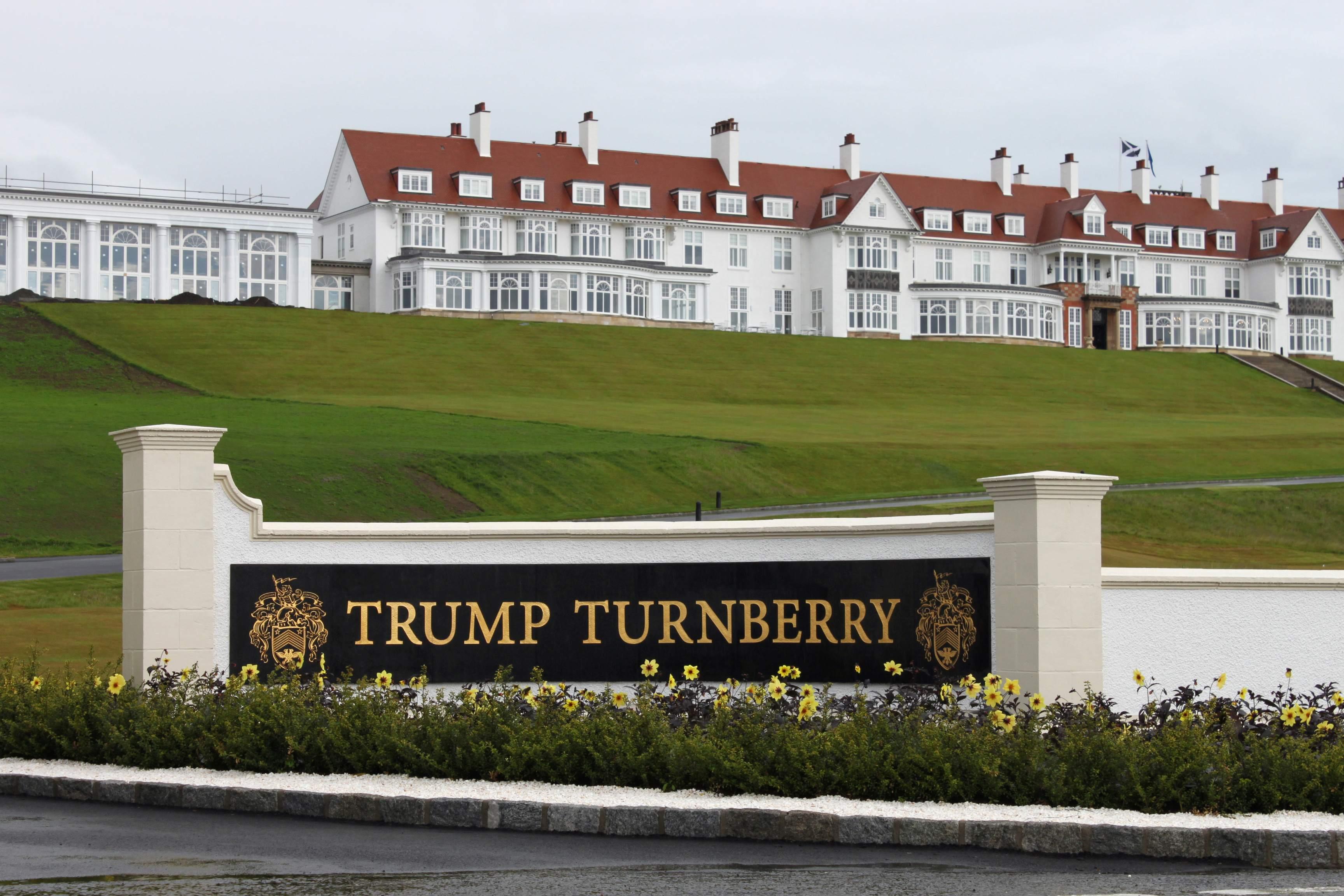 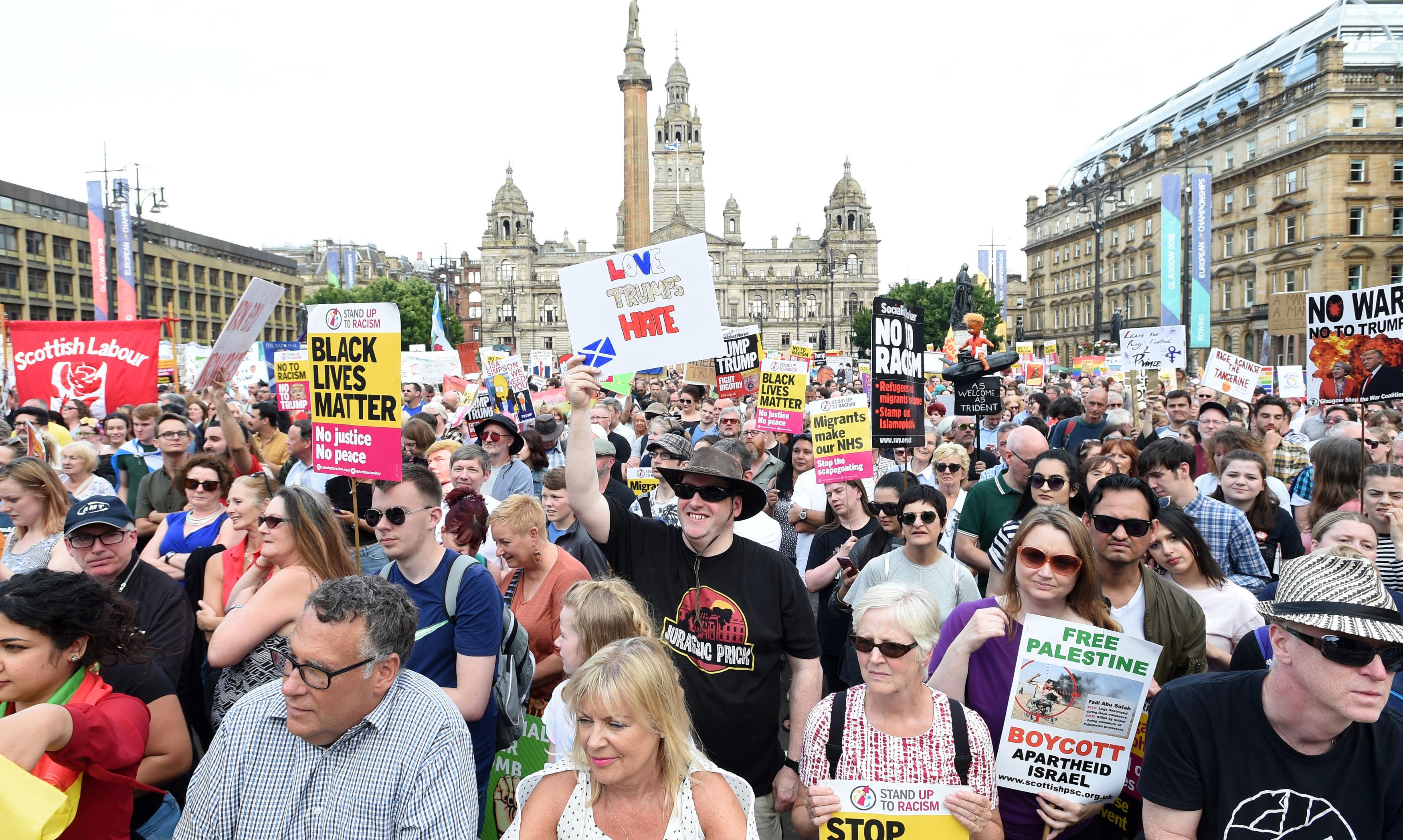 Yesterday in London there were clashes between protesters and Trump supporters during a march in the capital.

Crowds chanted "shame on you" and waved "dump Trump" banners during a 100,000-strong demonstration, which was joined by Jeremy Corbyn, Ed Miliband and David Lammy.

This morning International Trade Secretary Liam Fox told BBC Breakfast that the anti-Trump campaigners were "an embarrassment to themselves", and they "did not reflect the genuine good manners and hospitality of the British people."

Protests are expected to continue today in Edinburgh, as thousands arrive for a "Carnival of Resistance".

And it will feature the Trump baby balloon that was the focus of yesterday's march in London.

But it's been banned from both Turnberry and Holyrood.