Speaking in the White House, the US President claimed Iran has continued to develop its nuke programme branding the agreement "disastrous" and "defective at its core." 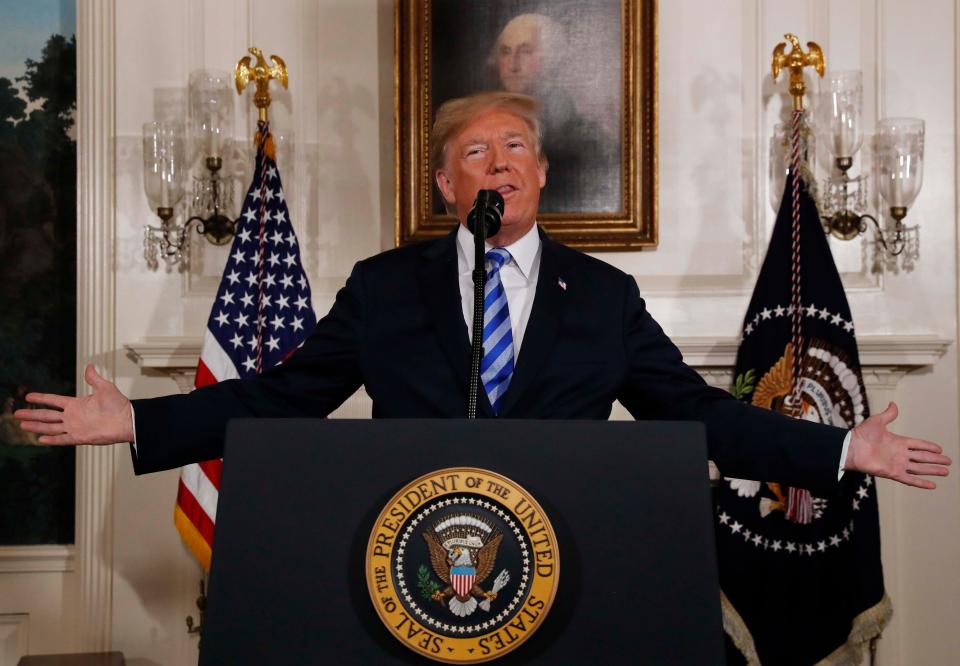 He said: “The so-called Iran deal was supposed to protect the United States and our allies from the lunacy of an Iranian nuclear bomb, a weapon that will only endanger the survival of the Iranian regime.

“In fact, the deal allowed Iran to continue enriching uranium and over time reach the brink of a nuclear blackout.”

“Today, we have definitive proof that this Iranian promise was a lie."

The Republican, who called the agreement "rotting and decaying", said he would impose the "highest level" of economic sanctions on Iran.

He said: "The United States no longer makes empty threats. When I make promises, I keep them." 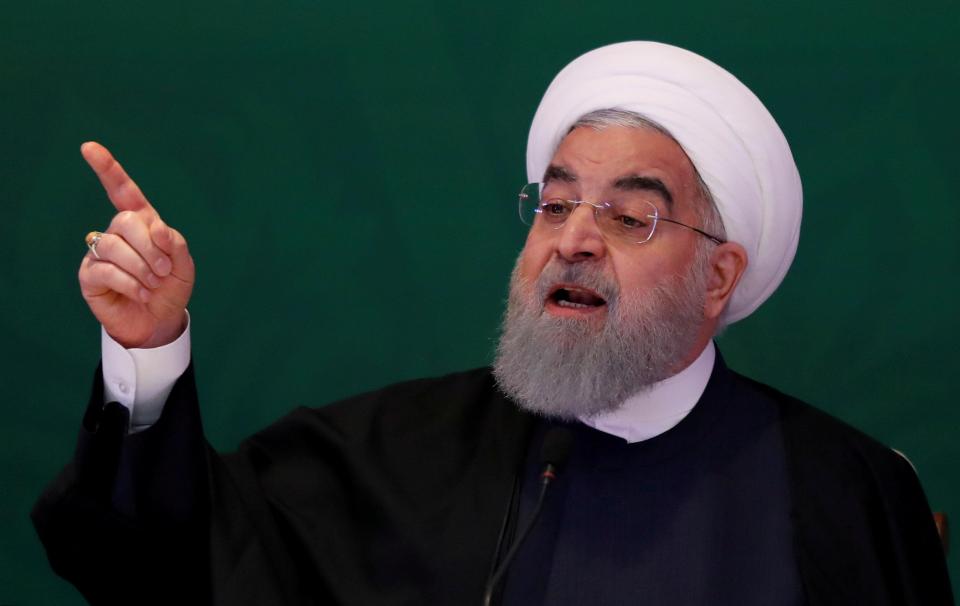 The US President added: "As we exit the Iran deal we will be working with our allies to find a real, comprehensive and lasting solution to the Iran nuclear threat."

Trump, who branded Iran a "regime of great terror", says that if he allowed the deal to stand, there would soon be a nuclear arms race in the Middle East.

He also says a constructive deal could easily have been struck at the time, but it wasn't.

Trump insisted that America "will not be held hostage to nuclear blackmail" and will not allow "a regime that chants 'Death to America'" to get access to nuclear weapons.

And he says that "no action taken by the regime has been more dangerous than its pursuit of nuclear weapons and the means of delivering them."

The New York property tycoon also sent a message to North Korea saying Secretary of State Mike Pompeo was travelling to the rogue state to discuss the scrapping of its nuke programme. 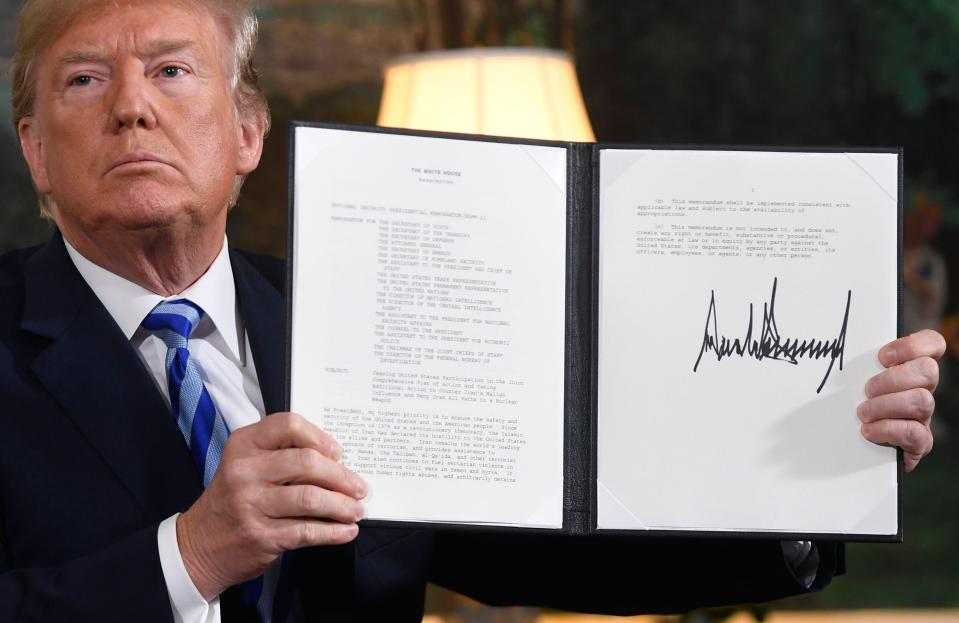 “When I make promises, I keep them. In fact, at this very moment, Secretary Pompeo is on his way to North Korea in preparation for my upcoming meeting with Kim Jong-un."

In response, Iran said it is preparing to restart enriching uranium at "industrial levels".

Iranian President Hassan Rouhani hit back in a defiant press conference in Tehran.

He told reporters: "I have ordered Atomic Energy Organisation of Iran to be ready to start the enrichment of uranium at industrial levels.

"We will wait a few weeks and speak with our allies and friends and those committed to JCPOA.

"All depends on our national interests."

Israeli Prime Minister Benjamin Netanyahu made a televised address after Trump’s announcement, lauding the US President’s uncompromising stance on Iran and alluding to the tensions over Syria.

He said: “For months now, Iran has been transferring lethal weaponry to its forces in Syria, with the purpose of striking at Israel.

“We will respond mightily to any attack on our territory.”

Moments after Trump's speech, Israel bombed a Syrian military base killing nine people after fearing an attack from Iranian-backed forces.

The Jewish state launched rockets at the base in the Kisweh area south of Damascus after detecting “irregular activity” of Iranian forces in Syria.

Trump has repeatedly slammed the Iran agreement struck with Iran by the Obama administration calling it “the worst deal ever." 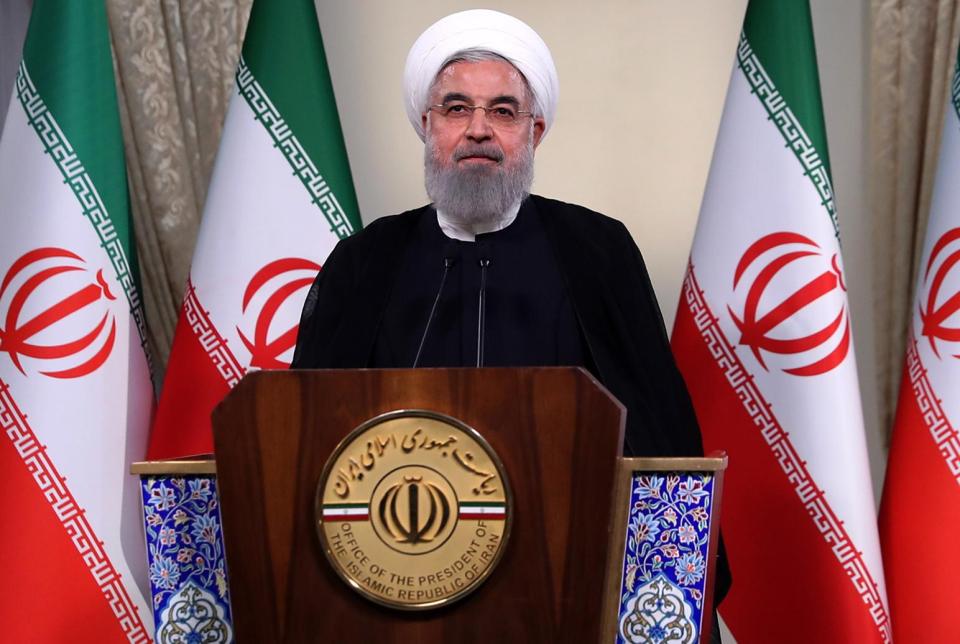 A Downing Street spokesperson said: "The Prime Minister held a joint telephone call with the German Chancellor Angela Merkel and French President Emmanuel Macron earlier this evening, where they discussed the US President’s announcement and agreed their continuing commitment to the Joint Comprehensive Plan of Action.”

In the joint statement, Britain, France and Germany expressed "regret and concern" over Trump's decision and urged the US to keep the structures of the agreement "intact."

The deal is an arrangement between the Islamic Republic and a group of world powers for Iran to abandon its nuclear programme.

Officially it is known as the The Joint Comprehensive Plan of Action (JCPOA) and commits the US to easing a series of sanctions on Iran. 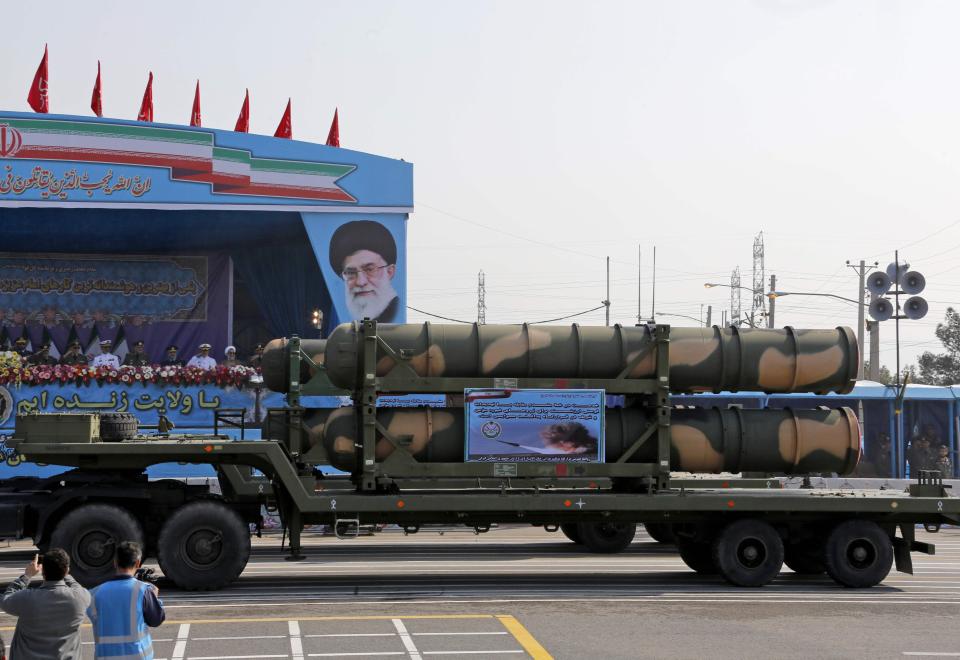 It saw the Middle Eastern nation agree to reduce its stockpile of medium-enriched uranium by 98 per cent.

Vocal supporters of pulling out of the deal include Israel’s PM Benjamin Netanyahu who last week revealed the Iranians had kept their files on nuclear development.

A daredevil mission by Mossad in Tehran revealed a cache of documents that appeared to show Iran had been dishonest about its nuclear ambitions.

“Iran lied, big time,” said Netanyahu in a presentation believed to be aimed at putting pressure on Trump to pull out of the deal.

Other critics of the deal argue that it in fact aids any nuclear ambitions Iran may have.

Trump says the nuclear deal has fundamental flaws such as doing little to address Iran’s ballistic missile programme or its “malign activities” in the region — a reference to Tehran’s military involvement in Syria and elsewhere.

Dr Steven Hurst, of Manchester Metropolitan University has written a book due to be published later this year on the history between the USA and Iran.