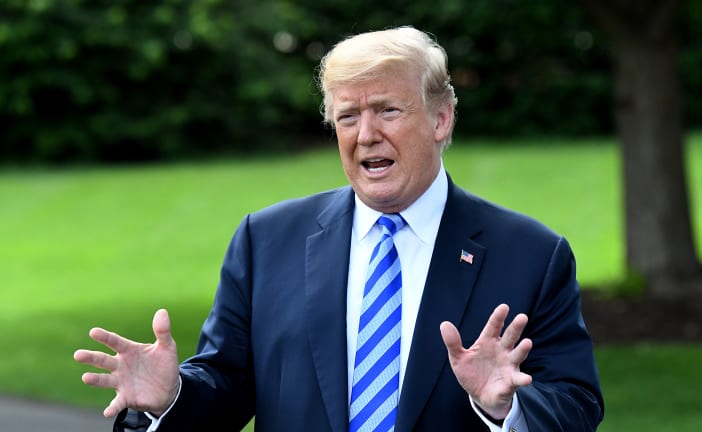 President Donald Trump speaks to members of the media.

Is the president above the law?

That’s the question at the heart of America’s slow-moving constitutional crisis. Over the weekend, The New York Times published two letters that Donald Trump’s lawyers sent to Robert Mueller, the special counsel investigating Russian interference in the 2016 election. In it, the lawyers made a shocking claim: the president is incapable of obstructing justice, because as the nation’s chief law enforcement officer, he is the final arbiter of justice.

Should Mueller move forward to subpoena the President, or should Trump try to fire Mueller, that theory of an above-the-law president will be put to the test.

It won’t be the first time that a president has tried to shield himself from the full reach of the law. And yet in the past, checks and balances — both formal and informal — reinforced the long-standing view that no citizen, regardless of status, was exempt from justice. But in the Trump era, those safeguards seem far less sure.

The Magna Carta laid out the principle that no one was above the law — not even a king. It did so by creating checks on the monarchy’s unlimited powers: a group of barons could seize the king’s properties if he failed to meet his obligations. In the US, those ideas were formalised in the oversight roles of the three branches of government.

But not all presidents have readily accepted these limits. The most important showdown between a president and the rule of law involved Richard Nixon. Having overseen, ordered and committed any number of crimes during his campaign and presidency, by the start of his fifth year in office, Nixon was caught up in a number of congressional investigations.

Nixon firmly believed that as president, he had a level of executive authority that the courts could not challenge. In 1971, when The New York Times and Washington Post were preparing to publish the Pentagon Papers, a top-secret study of the Vietnam War, Nixon went to court to bar the newspapers from publishing the report. The court ruled, 6-3, that the government could not prevent the publication.

That same assertion of executive authority came into play when the special counsel investigating Watergate subpoenaed Nixon’s secret Oval Office recordings. The Supreme Court again rejected the president’s claim of unlimited power — this time unanimously — arguing that Nixon’s assertion of “an absolute, unqualified presidential privilege of immunity from judicial process under all circumstances” clearly went further than the Founders’ belief in a restrained presidency.

Nixon ultimately resigned when it became clear that he would be impeached and convicted. But he never agreed with the court’s restrictions on the presidency’s power. In a famous interview in 1977, David Frost asked Nixon whether his illegal acts were justified. Nixon countered with a full-throated defence of executive power: “When the president does it that means that it is not illegal.”

Donald Trump clearly agrees with that view. Again and again, he and his lawyers have asserted a view of the presidency as a consequence-free role, one in which the president has free rein to pursue his interests without interference or investigation.

But that does not mean that his fate will be the same as Richard Nixon’s. Impeachment is a political, not a judicial, process, and Republicans have shown no interest in challenging Trump. A recent poll helps explain why: 87 per cent of Republican voters support Trump, one of the highest levels of intra-party support in the modern era.

Trump may be, on the whole, far more unpopular than his predecessors, but so long as he retains high support within his base, he is largely shielded from congressional checks.

Trump also has the support of a unified conservative media. While conservative media backed Nixon during Watergate, it was far smaller and less influential than the current right-wing media ecosystem. The combined support of Fox News, talk radio, and right-wing websites have helped not only secure Trump’s popularity on the right, but muddy the facts around the Mueller investigation.

The judiciary remains the most likely check on Trump’s assertion of absolute power. Trump has been President for 500 days, and in that time, the courts have been the only institution to reliably thwart executive overreach.

This has been especially apparent in the fight over the travel ban. Time and again, courts have pointed to the President’s words to highlight the unconstitutional discrimination at the heart of what Trump initially called “a Muslim ban".

When it comes to questions of collusion and obstruction, Trump’s words may not matter to Congress or conservative media, but they do matter to judges.

The President’s bald assertion that he fired FBI director James Comey because of the Russia investigation is a powerful piece of evidence in an obstruction case, one that can’t be waved away.

If there is going to be a neutral arbiter not only of collusion and obstruction, but of the limits of the modern presidency, it will come from the courts. Whether the President will respect their judgment will determine how extensive the coming constitutional crisis will be.

Nicole Hemmer is a Fairfax Media columnist based in the United States.