Seoul: A senior North Korean official is headed to New York to discuss an upcoming summit, US President Donald Trump said on Tuesday, the latest indication that an on-again-off-again meeting between Trump and North Korea's leader may go ahead next month.

The talks indicate that planning for the unprecedented summit on curbing Pyongyang's nuclear weapons program, initially scheduled for June 12, is moving ahead after Trump called it off last week in a letter to the North's leader, Kim Jong-un. 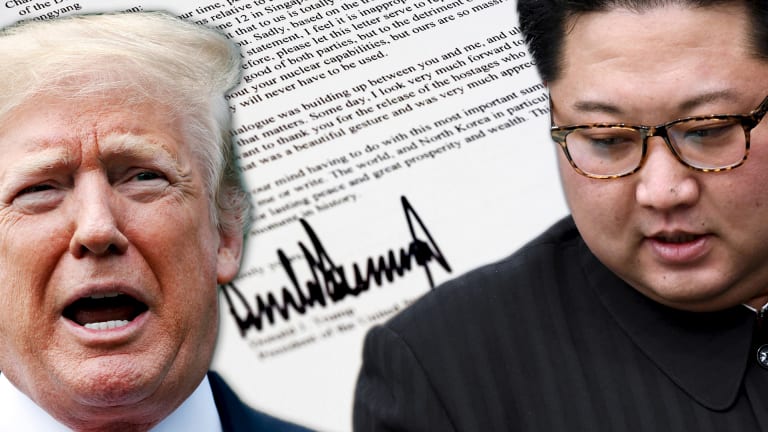 Analysts believe the United States is trying to determine whether North Korea is willing to agree to sufficient steps toward denuclearisation to allow a summit to take place.

At the same time, a "pre-advance" US team was in Singapore to meet North Koreans.

In Singapore, a team of US officials was at a hotel on the resort island of Sentosa but declined to comment.

North Korea has faced years of isolation and economic sanctions over its nuclear and missile programmes since it conducted its first nuclear test in 2006.

But events have moved quickly since Kim made a conciliatory New Year’s address at the end of last year, following months of sharply rising tension and war-like rhetoric between Trump and Kim.

The latest flurry of diplomacy began on Saturday, when Kim and South Korean President Moon Jae-in held a surprise meeting at the border village of Panmunjom, during which they agreed the North Korea-US summit must be held.

On Sunday, the US State Department said American and North Korean officials had met at Panmunjom. Sung Kim, the former US ambassador to South Korea and current ambassador to the Philippines, led the US delegation.

Sung Kim will meet North Korean Foreign Ministry official Choi Sun Hee again on Wednesday on the border, Yonhap reported, citing a diplomatic source, adding that the agenda for the Trump-Kim summit would be roughly worked out.

While likely substantive, those discussions could be upstaged by any talks between Kim Yong Chol and officials in the United States, said Evans Revere, a former senior diplomat who dealt with North Korea under US president George W. Bush.

The future of North Korea's nuclear programme, which has been a source of international tension for decades, US security guarantees and coordination for a Trump-Kim summit are likely to be at the top of the agenda, analysts said.

"The most important agenda item would be the method of denuclearisation," said Moon Sung-mook, a former South Korean military official who negotiated with Kim in the past.

"We can expect that Kim (Yong Chol) is visiting the US in order to do final coordination ahead of the June 12 summit."

In Kim Jong-un and Moon's first meeting on April 27, they agreed to seek the "complete denuclearisation" of the Korean peninsula but did not define what that meant or how that would proceed.

Since then, North Korea has rejected US demands for it to unilaterally abandon its nuclear programme, which experts say could threaten the United States.

South Korea's Defence Ministry said it did not have plans to change exercise schedules with the US military.

North Korea defends its nuclear and missile programmes as a deterrent against what it sees as US aggression. The United States stations 28,500 troops in South Korea, a legacy of the 1950-53 Korean War, which ended in a truce, not a peace treaty.

Kim Yong Chol has played a central role in the recent thaw in relations between North Korea and South Korea, as well as the United States.

The United States and South Korea blacklisted him for supporting the North's nuclear and missile programmes in 2010 and 2016, respectively, so a visit to the United States would indicate a waiver was granted.

During his tenure as a senior intelligence official, Kim was accused by South Korea of masterminding deadly attacks on a South Korean navy ship and an island in 2010. He was linked by US intelligence to a cyber attack on Sony Pictures in 2014.

North Korea denied any involvement in the attack on the ship and on Sony Pictures.

When Kim Chang Son was asked by a reporter at Beijing airport if he was flying to Singapore for talks with the United States, he said he was "going there to play", according to Nippon Television Network.

China said it had no information to offer on any North Korean officials travelling to the United States via Beijing.