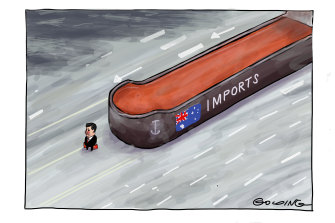 Don’t forget these people
Dr Kylie Moore-Gilbert’s long-awaited release from 800 days of imprisonment in Iran despite her innocence of wrongdoing has prompted an examination of trauma (‘‘The long road to recovery from trauma’’, The Sunday Age, 29/11).

Our hearts are with her and we are grateful that the Morrison government secured her release. The conditions and the reasons for her imprisonment have appalled us.

Not wanting to take anything away from her experience, I do wonder why we are appalled by the Iranian government’s treatment of her and yet condone similar treatment of people seeking asylum in Australia by our governments.

Please let us continue to track and understand Dr Moore-Gilbert’s trauma and celebrate her recovery. In doing so, perhaps we will hold our own governments to account in regard to other innocent people detained in cruel, dehumanising conditions.
Peta Price, Ballarat

There’s a reason for this
Yet again Jacqueline Maley offers us a persuasive insight into the political class and its gross disregard for honesty and accountability (‘‘No matter how they stuff up, in the Morrison era politicians don’t resign’’, The Sunday Age, 29/11).

That ministers can so easily evade taking responsibility for decisions they make and evade accountability, and then dress it up in hyperbole, should not surprise us. It is nothing new.

The tragedy of this practice is that it only serves to confirm our lack of trust in the political system and that most politicians are self-serving.
Judith Morrison, Mount Waverley

It’s not that easy
Damien Ryan (Letters, 3/12) has vowed not to buy anything made in China for the foreseeable future.

I have been trying not to buy anything made in China for the memorable past but this has often proved impossible.
Sue Currie, Northcote

It can be done
Poverty and growing inequality in a wealthy country like Australia are a disgrace – lack of secure shelter is a further barrier to self-esteem and socioeconomic progress.

To be told, as inferred by the ‘‘wealthiest councils’’, that home owners don’t want you in their communities is an added indignity for public/social housing tenants (‘‘Wealthiest councils fight public housing bid’’, The Age, 4/12).

Some objections to social housing are vile and baseless, but authorities must acknowledge real concerns about issues like property values. One way of addressing concerns is to examine the way in which councils like the City of Port Phillip have integrated social housing within their local communities.

Until recently, I was treasurer of a community housing group, and I owned a rooming house in South Melbourne in the 1980s.

I know that if special needs are recognised and people are treated respectfully as responsible citizens, they are good neighbours and tenants. Public/social housing ghettos – or US-styled gated communities – are a poor, divisive and uncivilised response to a housing crisis.
Norman Huon, Port Melbourne

At odds with the model
Jessica Irvine says that the superannuation system is not designed to allow retirees to leave sizeable nest eggs for their kids (‘‘Relax, retirement’s quite cheap’’, The Sunday Age, 29/11).
However, that view does not really reflect the current design of the Australian superannuation system.

The fact that many people retain substantial amounts of super until they die is a side effect of the accumulation model of super, which encourages people to regard their retirement as just another form of investment.

Under this model, the emphasis is on the size of the super balance required to generate a desired annual income. So, rather than worrying about ‘‘how long it will last’’, attention switches to how much income the fund can earn each year. If that amount can be maintained, how long one may live for becomes irrelevant.

It is the peace of mind that way of thinking produces that leads many people to accumulate super balances far larger than they actually need.
Rod Wise, Surrey Hills

An ineffectual treadmill
The content of the Labor Right’s path back to power confirms the poverty of their capacity to effectively tackle the four critical issues of our times: global heating, intensifying inequalities, the rise of China to globally dominant power and closing the gap for our Indigenous citizens (‘‘Labor Right plots return to identity and power’’, The Age , 4/12)

The proposals outlined in the book The Write Stuff: Voices of Unity on Labor’s Future are simply not fit for purpose. The scale of change required to current economic and social structures, behaviours and outcomes are not addressed.

The best that might come from these proposals might be to win brief periods of do-little government in between long periods in opposition when do-little Coalition governments do even less.

In short, Australia remains on an ineffectual centrist treadmill as we stumble through the century towards the tercentenary in 2088.
Stewart Sweeney, North Adelaide

Physician, heal thyself
In attempting ‘‘to mend this bitterly fractured relationship’’, John Hewson suggests that ‘‘we could help China with aged care, climate and pollution … ’’), yet we don’t seem able to help ourselves on these issues (‘‘How do we find a better place with China? Hint: don’t start from here’’, online, 3/12).
Joe Wilder, Caulfield North