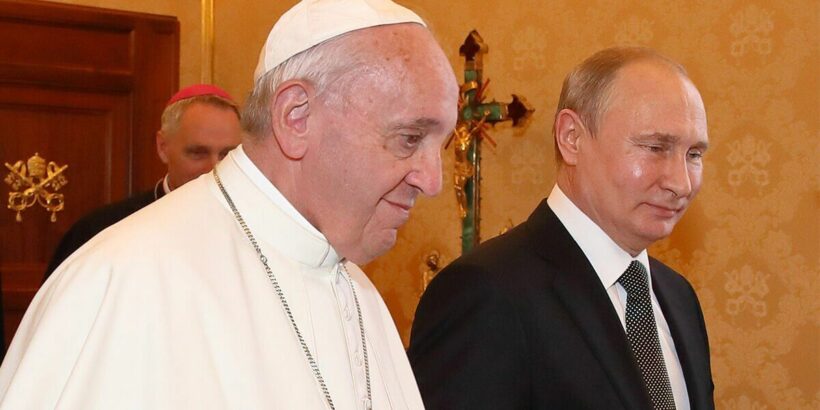 The Kremlin has not yet responded to Pope Francis’s offer to travel to Moscow to meet with Vladimir Putin to try end the war in Ukraine. Ukrainian MP Lesia Vasylenko expressed scepticism over the impact of the visit, arguing she cannot see “how anybody an talk sense into them”. Russia believe to be “the supreme nation” as well as “other nations have no right to exist”, said Ms Vasylenko as she warned the Holy Father of his possible failure.

“The latest being the head of the Roman Catholic Church the holy father the Pope.

“And Pope Francis has made an offer to Vladimir Putin that he personally would travel to Moscow to try and intermediate with all this.

“So far the Kremlin haven’t responded to him.

“Do you think anybody can make a difference?

“Do you think that Pope Francis could make a difference?”

Ms Vasylenko responded: “The Russians have their own Pope and they call him Patriarch Kirill.

“He is the mastermind of the Russian world ideology.

“And the Russian world is such that only Russia is the greatest nation and that there must be a big Russian empire.

“And all the smaller countries around Russian are not in fact countries at all and they don’t have a right to exist.

“And first and foremost that goes for Ukraine.

She concluded: “So when you are dealing with people who firmly believe in these statements, that other nations have no right to exist and that Russia is the supreme nation, I don’t see how anybody can talk any sense into them”.

Pope Francis said that the offer was made about three weeks after the beginning of Russia’s invasion of Ukraine with the purpose to mediate and try end the war.

Referring to the possible meeting in Moscow, Pope Francis was quoted saying to an Italian newspaper that “it would be necessary for the leader of the Kremlin to make available some window of opportunity.”

“But we still have not had a response and we still pushing, even if I fear that Putin cannot and does not want to have this meeting at the moment”, added Pope Francis.