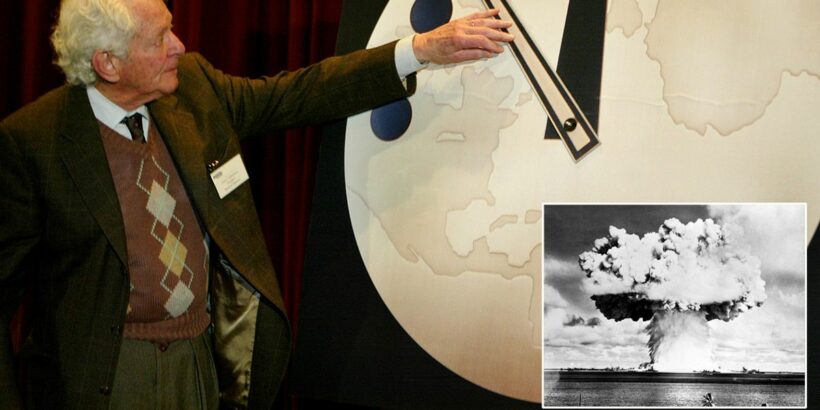 The Doomsday Clock warns the public about how close humans are to destroying the world – due to nuclear threats, climate change and information warfare.

Today the Bulletin of Atomic Scientists will reveal its updated time for 2022.

That means we will find out whether humanity is closer, or further away, to self-destruction.

Since 1947 the Doomsday Clock has been used as a metaphorical calculation of how close the apocalypse is.

Every year the minute hand on the clock moves closer to, or further away from midnight, depending on the event's of the previous year – such as nuclear proliferation or increased levels of greenhouse gases.

What is the Doomsday Clock?

The Doomsday Clock is a symbol representing how close humanity is to Doomsday, or the likelihood of a man-made global catastrophe.

It was created by the nonprofit Bulletin of Atomic Scientists in 1947 as a way of showing how close the world was to nuclear war.

Now the clock shows how close humanity is to "midnight", or to sealing its dire fate. Obviously, the further the clock is from midnight, the safer the world is.

The Bulletin of Atomic Scientists meet annually to decide whether the events of the previous year have pushed humanity closer to the brink of destruction, or further away.

Do you think the Doomsday Clock will move forward or backward? Let us know in the comments below.

Before you gather up all your belongings and find somewhere to hide, remember the Bulletin has no actual way of knowing how close we are to doom.

The board is keen to stress that the clock isn't meant as a prediction of the future, but an indication of where we are at right now.

What time is the clock – and will it move forward or backward?

The year previously the Bulletin gave the clock a pessimistic push.

Nobody knows whether the clock will move forward, or backward, apart from the Bulletin itself.

After another year of Covid-19 and climate disasters unfolding worldwide, it remains to be seen what time the clock will show in 2022.

With the spread of the Omicron variant, unequal access to vaccines worldwide, and Covid killing millions of people worldwide, it seems unlikely it will move further away. However, only time will tell.

BAS President and CEO Rachel Bronson said in 2020: "Danger is high, and the margin for error is low."

What time will the Doomsday Clock change?

You can find out what time the Doomsday Clock will show on Thursday January 20 at 3pm UK time (10am EST).

You can watch the press event live on the Bulletin of Atomic Scientists website, or on the organisation's Facebook page.

This will be a special broadcast as it commemorates the clock's 75th anniversary.