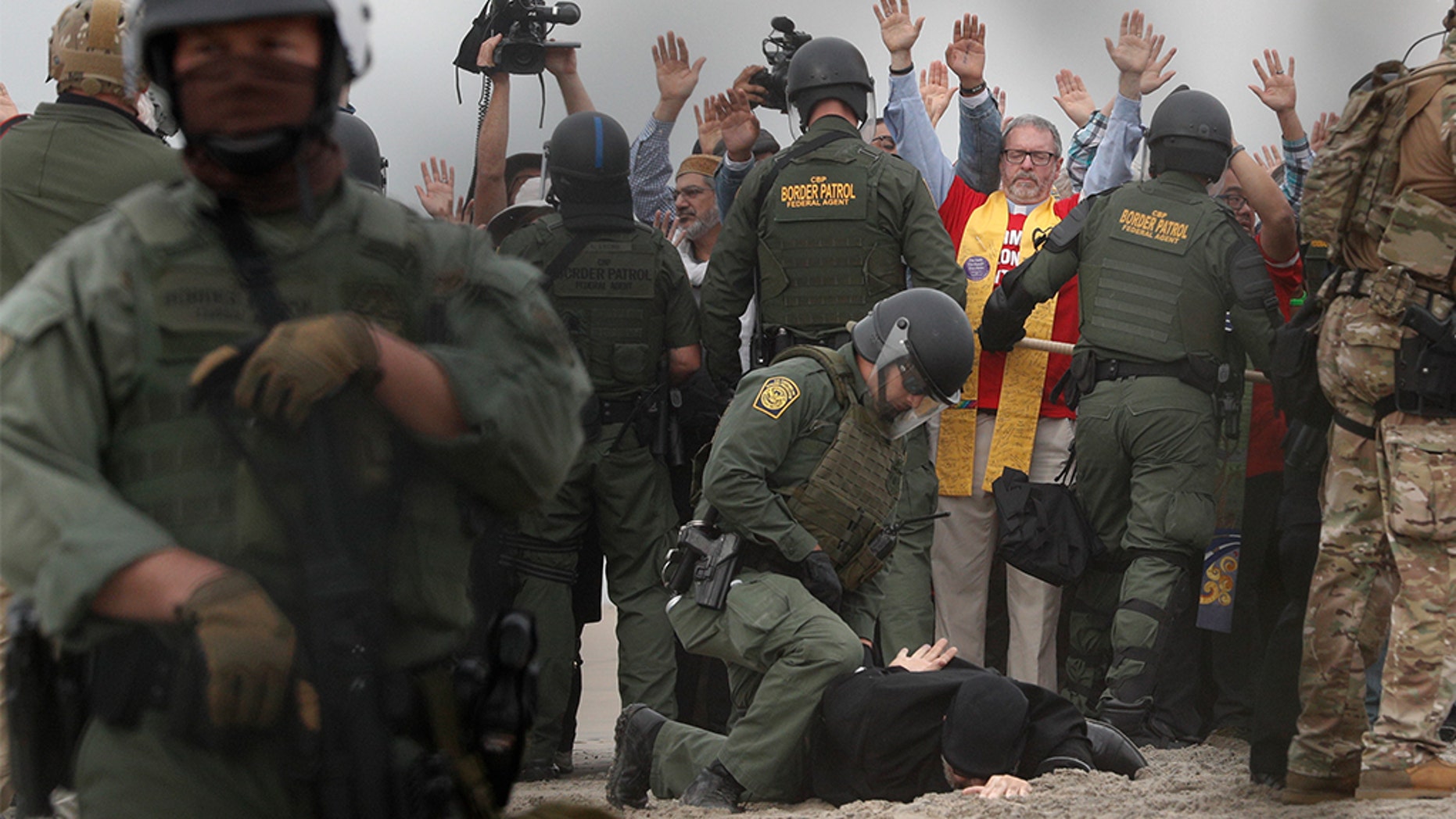 SAN DIEGO – U.S. authorities Monday arrested 32 faith leaders marching in California toward the Mexican border during a protest organized by a Quaker group. One activist was charged with assaulting an officer and remains in custody.

More than 300 people, many the leaders of churches, mosques, synagogues and indigenous communities, took part in the demonstration at San Diego's Border Field State Park, which borders Tijuana, Mexico.

Activists have demanded the U.S. government pull the military from border communities, “respect” the human right to petition for asylum and end deportations of illegal immigrants. The group also is calling on Congress to defund Immigration and Customs Enforcement (ICE) and Customs and Border Protection.

The rally, held on a beach divided by the border wall, was the second confrontation for U.S. agents since a caravan of more than 6,000 migrants, predominantly Hondurans, reached Tijuana last month. A confrontation with rock-throwers from Mexico led to U.S. agents firing tear gas into Mexico on Nov. 25 and a five-hour closure at the world’s busiest border crossing.

On Monday, the agents were dressed in riot gear, waiting in front of the border wall. 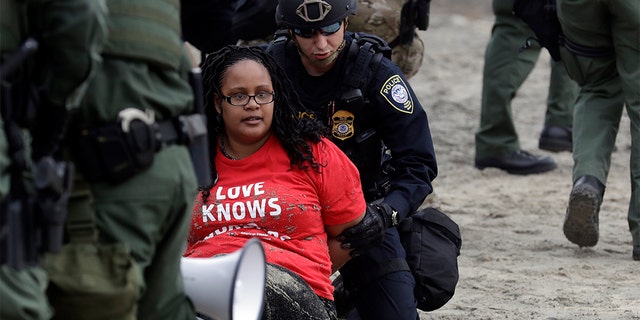 Protesters detained near the border with Tijuana, Mexico, on Monday. (AP Photo/Gregory Bull)

“Step back behind the caution tape! That is where you can peacefully demonstrate,” agents announced to those who showed up to demand a more “humane” border.

“Let us give (migrants) the resources they need,” Rev. Pamela Anderson said. “We don’t need military. We need judges.” 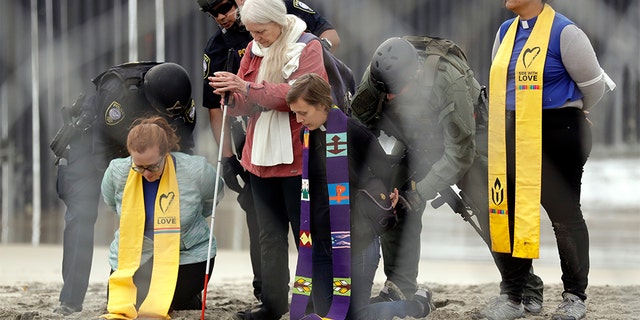 Daniel Burns, a protestor who made the trip from Maine, told KGTV the agents were professional.

“I sat down when they started walking toward us… they were professional,” he said. 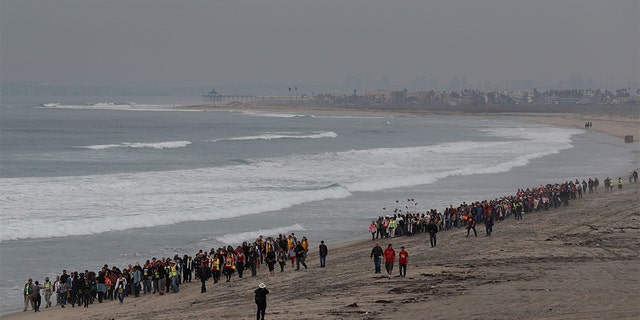 Members of various faith groups walking on the beach toward the U.S. border with Mexico. (AP Photo/Rebecca Blackwell)

The demonstration Monday was meant to launch a national week of action called "Love Knows No Borders: A Moral Call for Migrant Justice," which falls between Human Rights Day — on Monday — and International Migrants' Day on Dec. 18, the group said.

"Showing up to welcome and bless children, mothers and fathers seeking asylum from very difficult and dehumanizing circumstances is the right and humane thing to do," said Bishop Minerva G. Carcano from the United Methodist Church. "How we act in these moments determines who we will become as a nation." 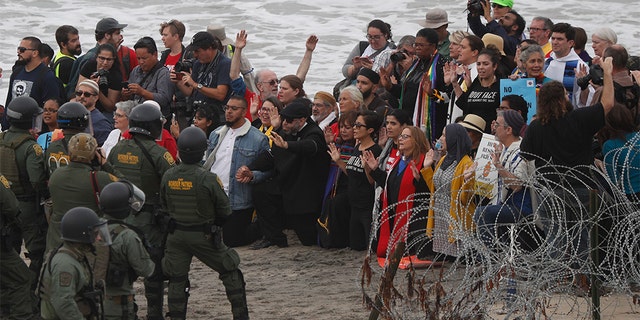 U.S. police and Border Patrol holding the line at the protest near the border. (AP Photo/Rebecca Blackwell)

Thousands of migrants are living in crowded tent cities in Tijuana after undertaking a grueling journey from Central America to the U.S. border. Many face waiting weeks or months in Mexico while they apply for asylum. The U.S. is processing up to about 100 claims a day at the San Diego crossing, which is creating a backlog.

Earlier Monday, U.S. officials announced Monday they will start withdrawing many of the active-duty troops that President Trump ordered to the U.S.-Mexico border in response to the caravan. About 2,200 of the active duty troops are set to leave before the holidays. The move by the Trump administration to beef up the military just before the midterm election was viewed by some critics as a political stunt and a waste of military resources. 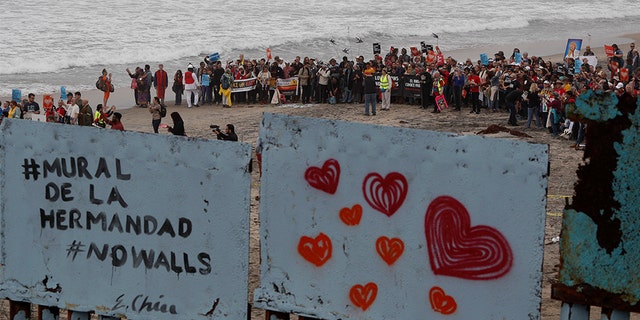 “Some units have completed their mission and they have already started to partially redeploy. Other units have been identified to rotate home and will be returning home over the next several weeks,” Manning said.