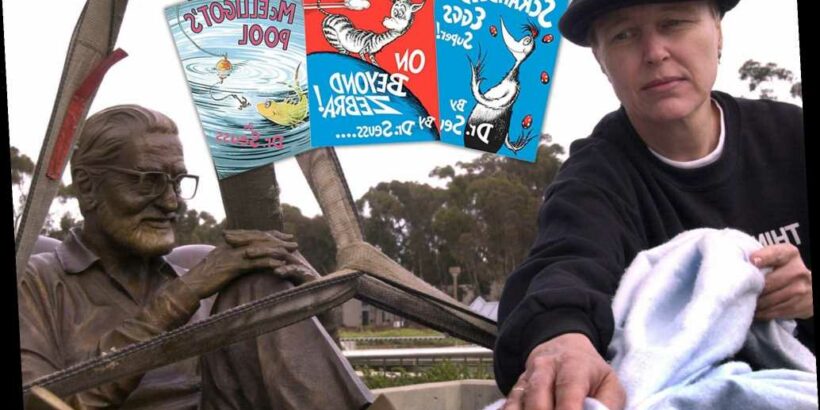 Dr. Seuss estate unlikely to be affected by scrapped books

‘The Cat in the Hat’ says don’t cancel that!

Here’s how much scrapped Dr. Seuss books are going for online

The doctor is out! Six Seuss titles yanked amid racism uproar

One of Dr. Seuss’ stepdaughters insisted to The Post on Tuesday that the world-famous children’s author was no racist — and that she hopes his six controversial kiddie books yanked from publication will be back.

“There wasn’t a racist bone in that man’s body — he was so acutely aware of the world around him and cared so much,’’ Lark Grey Dimond-Cates said of her late, now-embattled stepdad, whose real name was Theodor Seuss Geisel.

The company overseeing the legacy of the Dr. Seuss books, Dr. Seuss Enterprises, announced Tuesday that it will stop selling six of his titles because they “portray people in ways that are hurtful and wrong.”

Dimond-Cates said DSE, which works with publisher Penguin Random House, informed her Monday about its decision to not continue printing “If I Ran the Zoo,” “And to Think That I Saw It on Mulberry Street,” “McElligot’s Pool,” “On Beyond Zebra!,” “Scrambled Eggs Super!” and “The Cat’s Quizzer.”

“I think in this day and age it’s a wise decision,” she told The Post of the move.

“I think this is a world that right now is in pain, and we’ve all got to be very gentle and thoughtful and kind with each other.

“This is just very difficult, painful times that we live in,” said Dimond-Cates, a California sculptor, who added that Geisel came into her life when she was in grade school.

“We’re taking that into account and being thoughtful. We don’t want to upset anybody.’’

Dimond-Cates’ mother was Geisel’s second wife, Audrey Geisel, and the sculptor also has a sister, another of the author’s stepdaughters, Leagrey Dimond. Dr. Seuss did not have any children of his own.

Still, Dimond-Cates said she hopes the six pulled books will eventually go back into print “because his body of work is unique.”

She described her stepdad as “a sensitive, intelligent, caring man” who was “a product of his times, as we all are” — noting that he revised some of his illustrations over time and advocated for environmental conservation through books such as “The Lorax.”

She recalled that three of the halted titles — “Mulberry Street,” “McElligot’s Pool” and “If I Ran the Zoo” — grew out of Geisel’s memories of his “very happy childhood” in Springfield, Mass.

She noted that more than 20 publishers passed on the book — which takes its name from an actual street in Springfield — before it became the first to be published under Geisel’s iconic pen name.

“I think the lesson to learn from that book is, ‘Don’t give up,’ ” Dimond-Cates said.

Meanwhile, Leagrey Dimond declined to discuss the decision to yank her stepdad’s six books from publication but said, “Ted Geisel was my steppop, and I love him.”

The decision came on what would have been the 117th birthday of the writer — traditionally a moment feted in schools around the country as part of Read Across America Day on March 2.

But he has come under fire in recent years for his portrayal of blacks, Asians and other groups in his books.

“We believed that it was time to take action,” DSE said in a statement to The Post on Tuesday. “We listened and took feedback from our audiences including teachers, academics and specialists in the field, too, as part of the review process.”

The group declined to say how much in sales each of the now-yanked titles has racked up.