Ice rink UK: Experts warn drivers and pedestrians of ICY surfaces across whole of Britain after coldest night of the year tonight with bone-chilling -12C lows

Britain is braced for the coldest night of winter so far as drivers and pedestrians were warned of slippery surfaces after a band of wintry weather swept across large parts of the country.

Temperatures could fall as low as -12C (10F) in Scotland tonight, breaking the current record for this winter of -10.8C (13F) which was set last Friday at Braemar in Aberdeenshire.

Met Office warnings for ice remain in place across the whole of Britain throughout today and into tomorrow as cold air moves in – with showers forecast to continue to bring rain, sleet or snow as the day progresses. 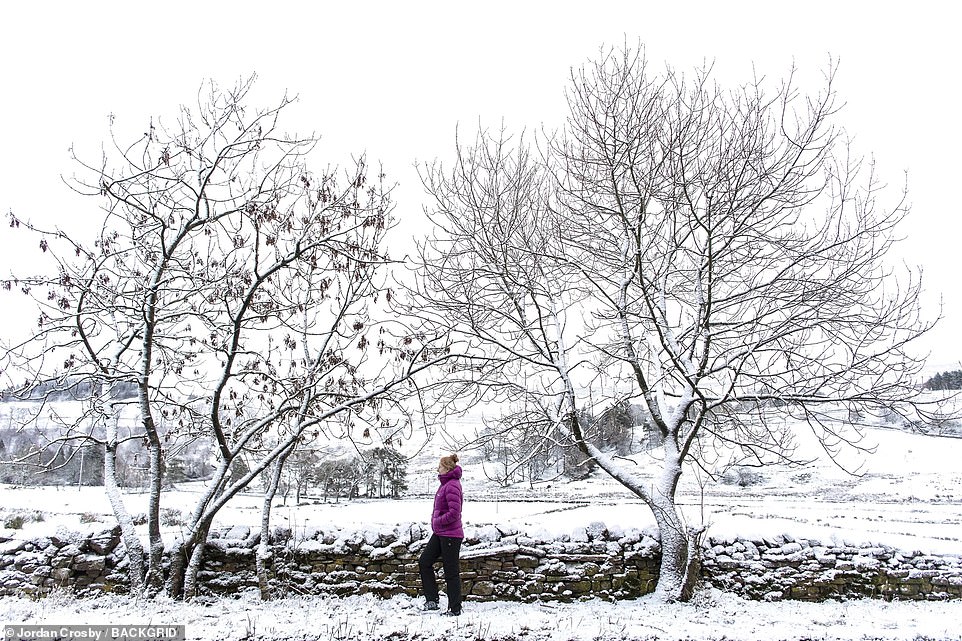 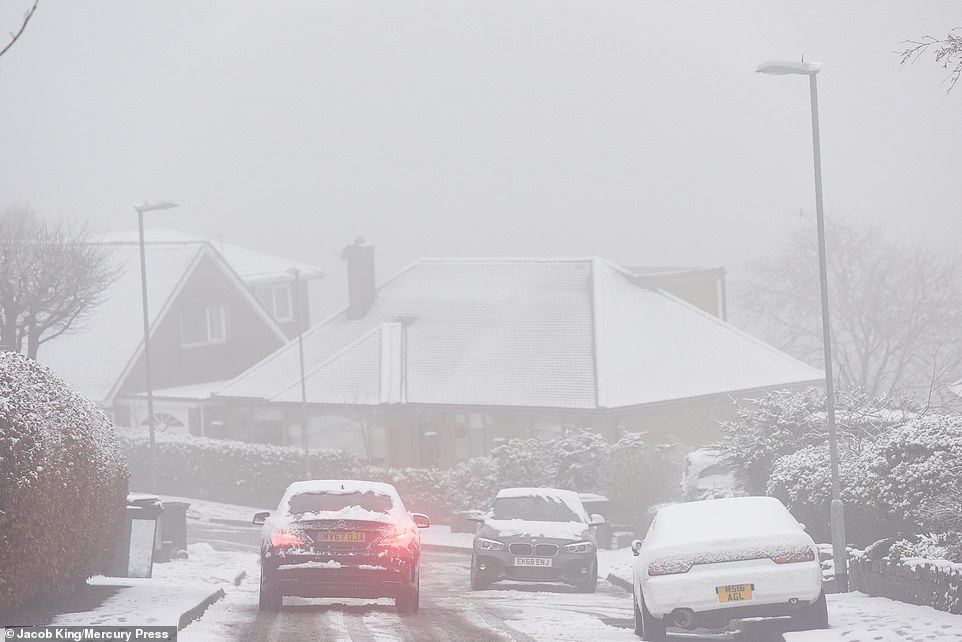 Cars in Saddleworth, Greater Manchester, are driven along the slippery roads after the area awoke to a layer of snow 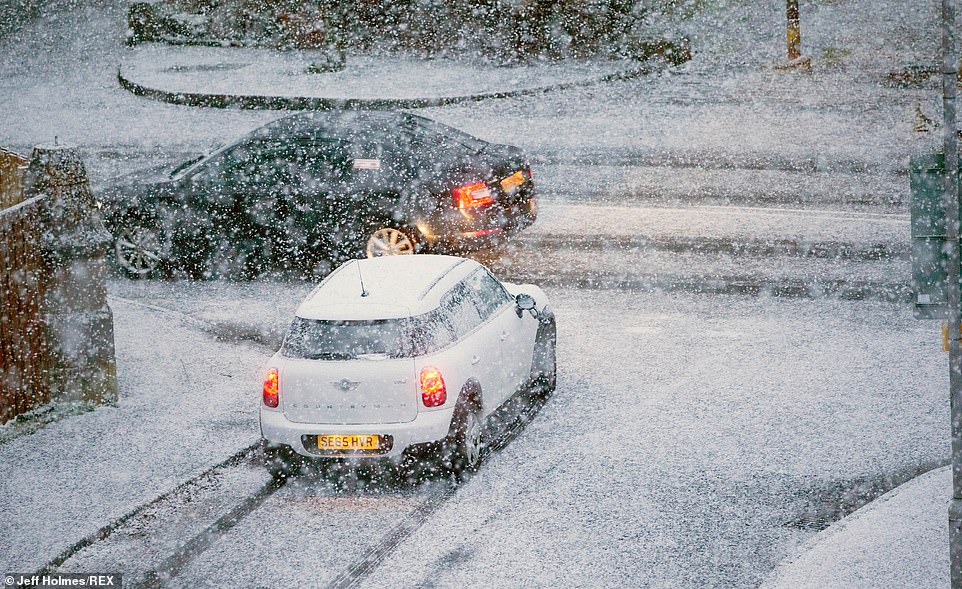 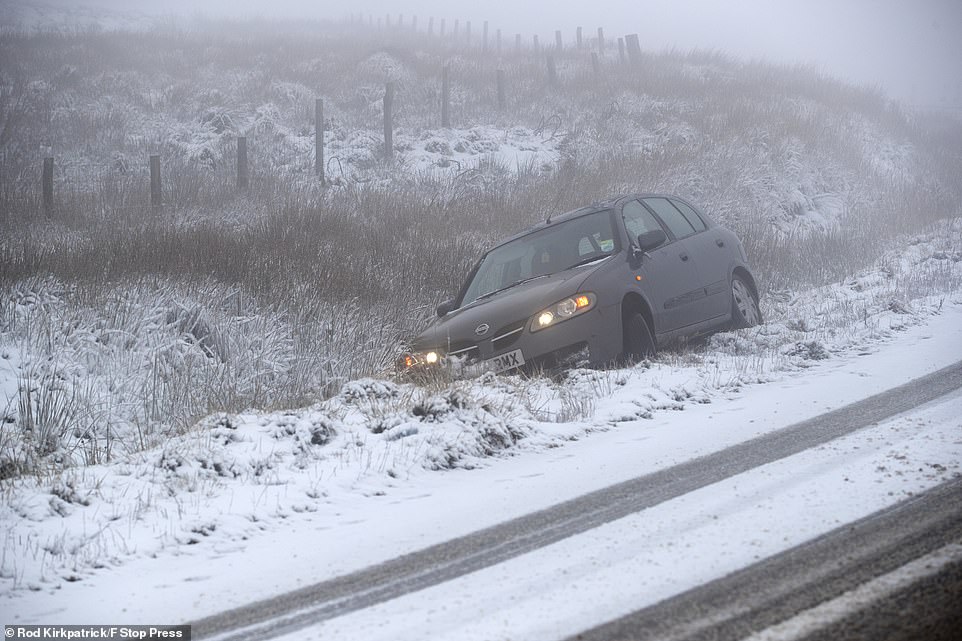 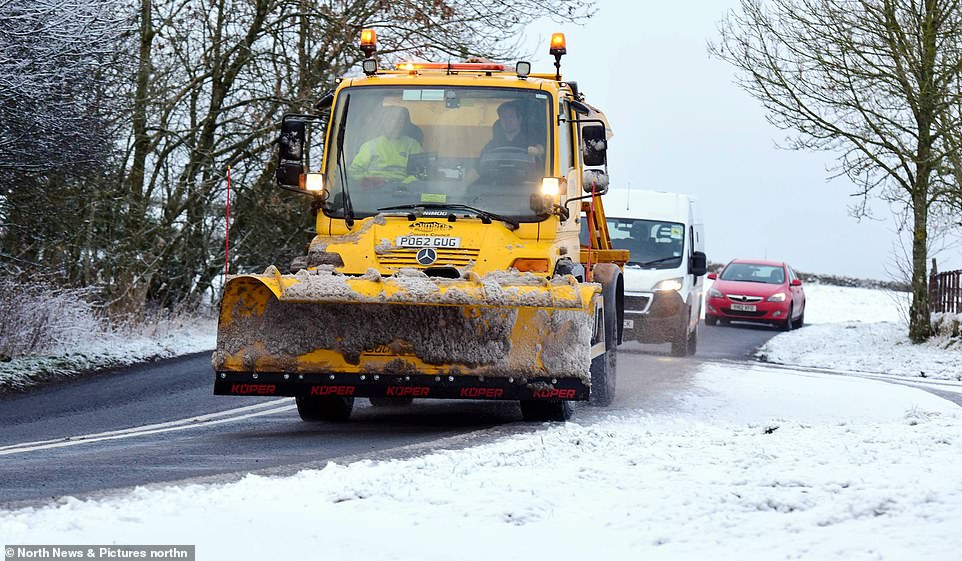 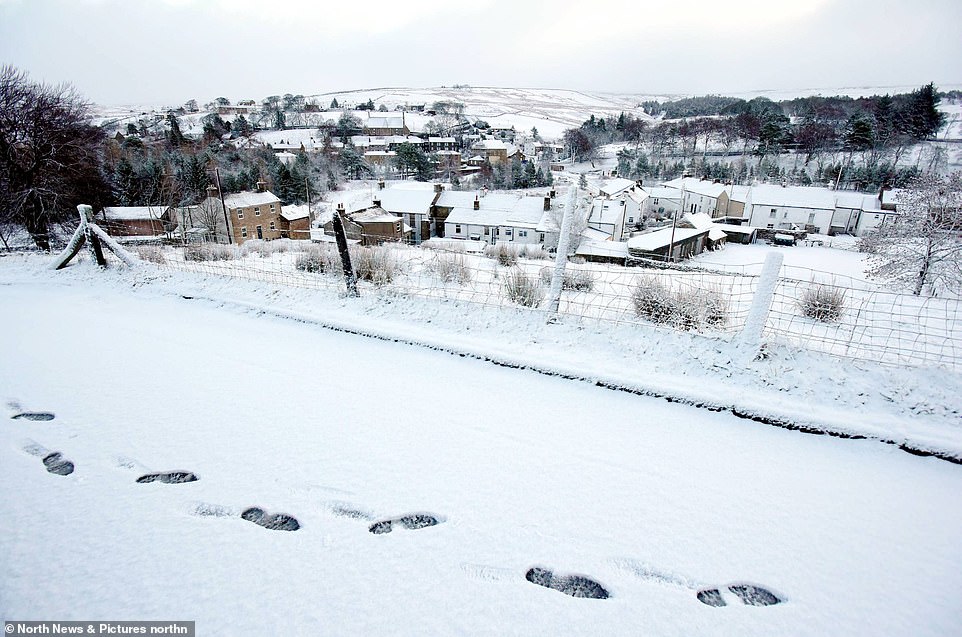 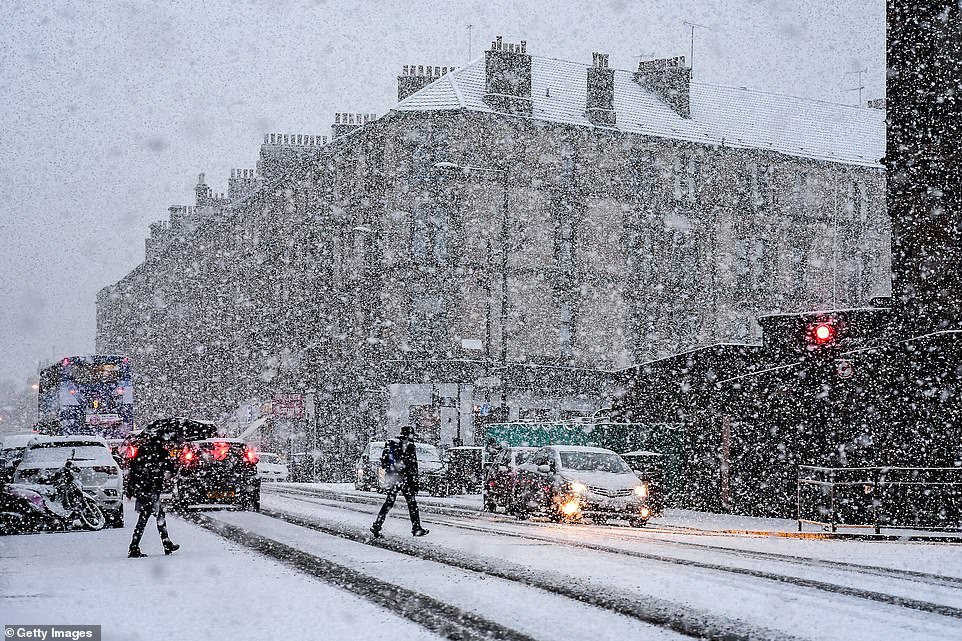 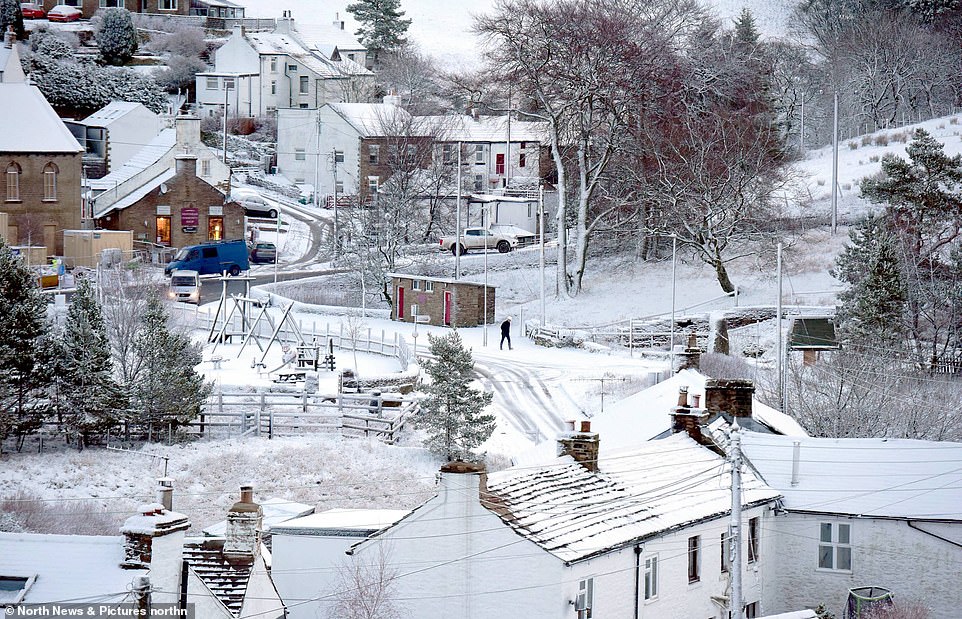 However, significant flurries are expected to remain limited to higher ground. Temperatures in London and Cardiff are expected to peak at 5C (41F), while Birmingham will see highs of 3C (37F) and 2C (36F) in Edinburgh.

Highways England warned motorists that it was snowing ‘quite heavy’ on the M62 trans-Pennine route, where efforts were under way to keep the road open using ploughs and salt.

On the M6 snow caused the closure of a sliproad at junction four overnight, but it was reopened in the early hours. Meanwhile a fleet of 32 gritters was out in south-west Scotland where Transerv described conditions as ‘Baltic’. 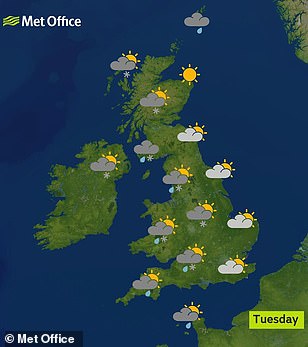 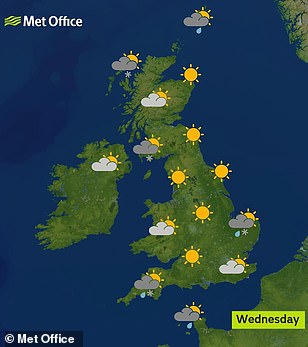 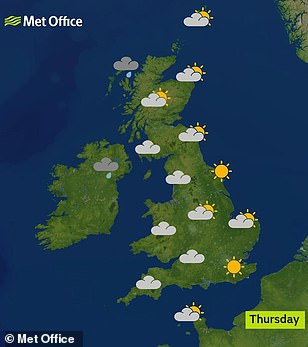 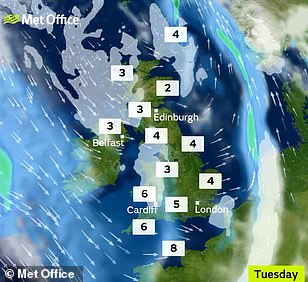 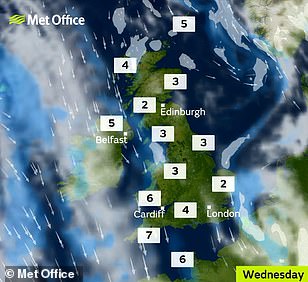 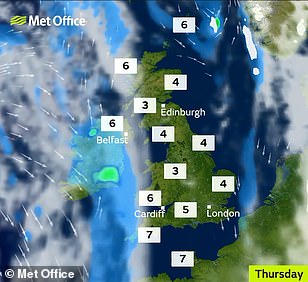 Temperatures will remain low across the country over the next three days, with a maximum of just 7C (45F) expected 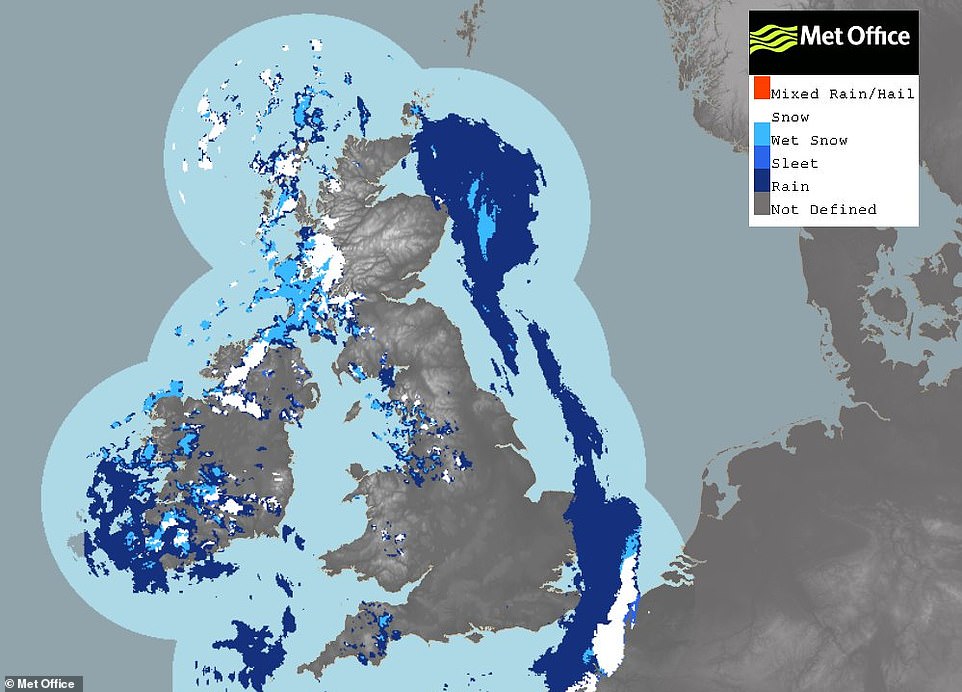 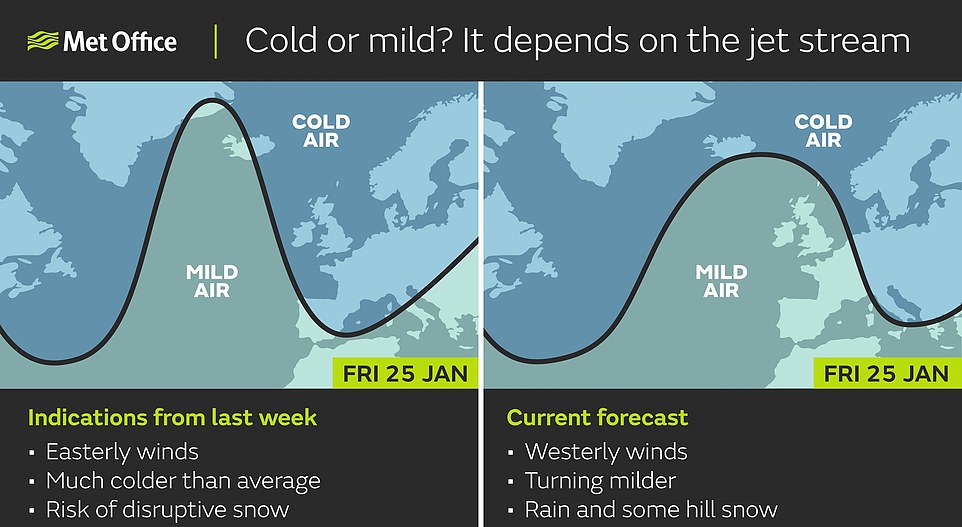 Up to an inch of snow is due to fall on high ground from the Peak District northwards and in North Wales. In Scotland, up to four inches of snow was expected overnight in the Highlands. 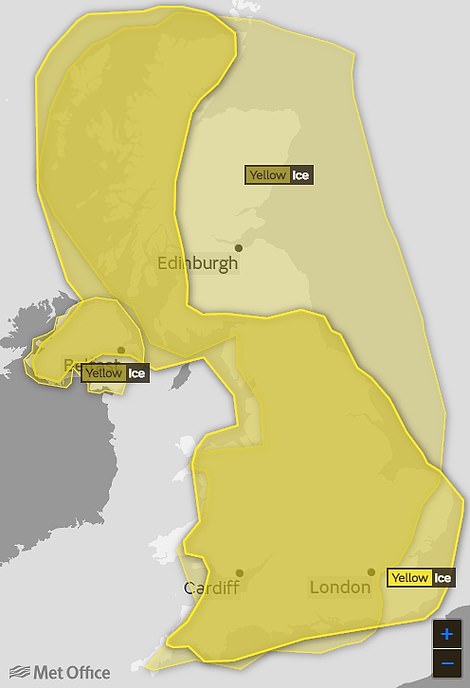 Some light snow was also seen down in South East England as the wintry front moved through from the North West.

Met Office meteorologist Sophie Yeomans said: ‘Most of the country is in the colder and showery air. The snow is mainly on the hills, while for most places the showers are falling as rain and maybe a bit of sleet.

‘We’ve got some ice warnings; the weather front that has gone through has left rain on the ground, so as the air temperatures start to drop ground temperatures will be below zero and that’s giving the risk of ice across most of the UK.

‘So look out for any areas where the surfaces haven’t been treated. On untreated surfaces there’s a risk of slips and falls. There’s also a risk of some icy surfaces on any untreated roads.’

Further frosts are expected over the coming nights, while daytimes will also continue to feel very cold, with more showers expected tomorrow. Thursday is expected to be mostly dry and sunny. 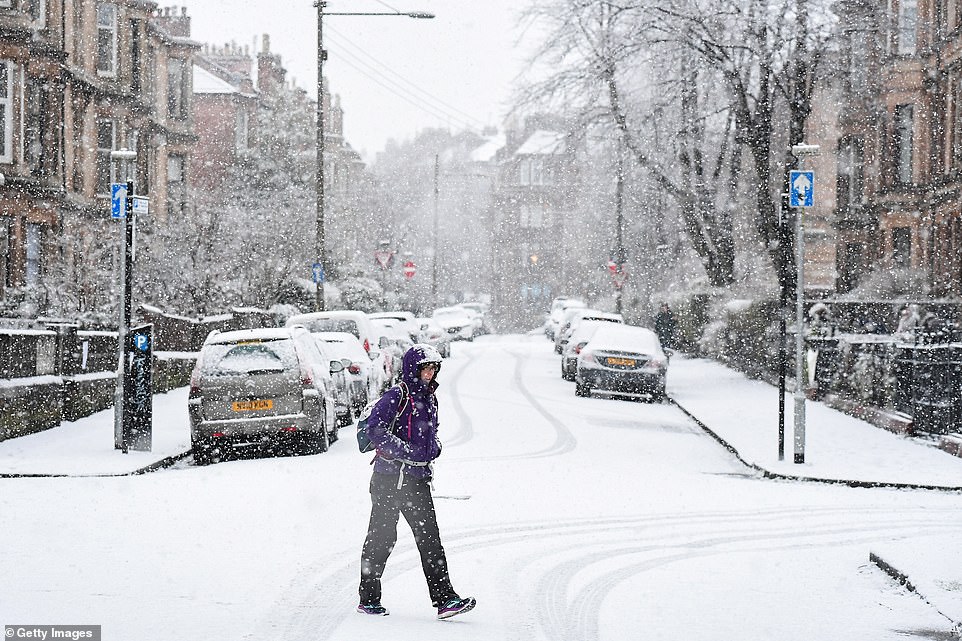 A woman walks across a road as snow falls in Glasgow today, with the Met Office issuing weather warnings across Britain 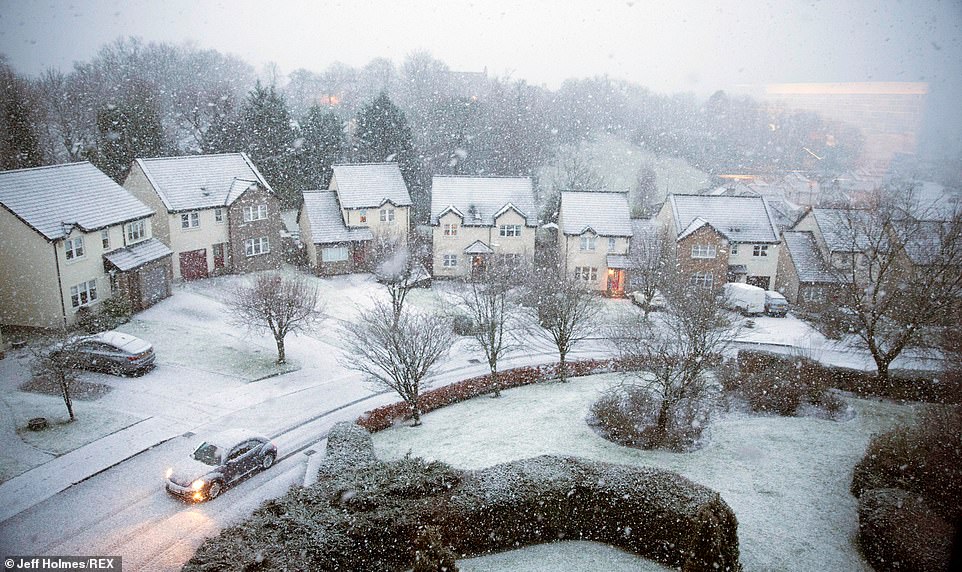 Snow falls this morning on Brodie Park in Paisley, a town on the northern edge of the Gleniffer Braes in Renfrewshire 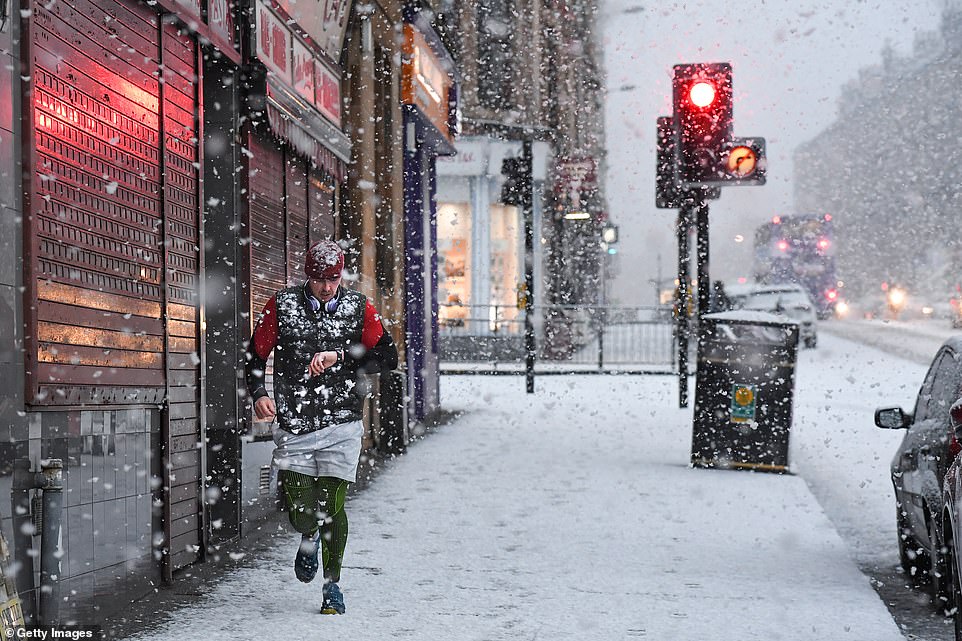 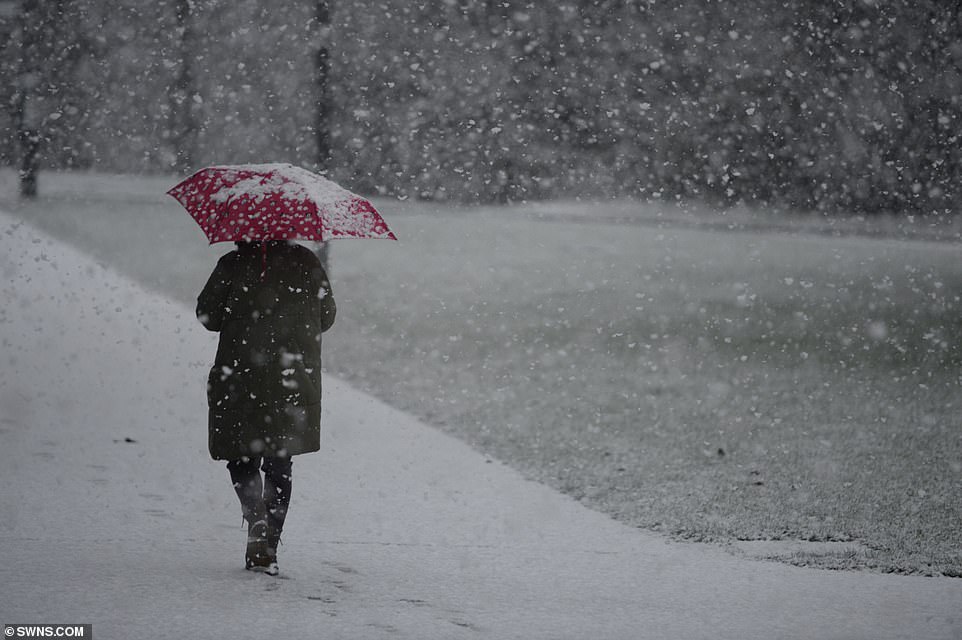 Heavy snowfall hits the West End of Glasgow today, as the spectre of a colder January takes hold of the British Isles 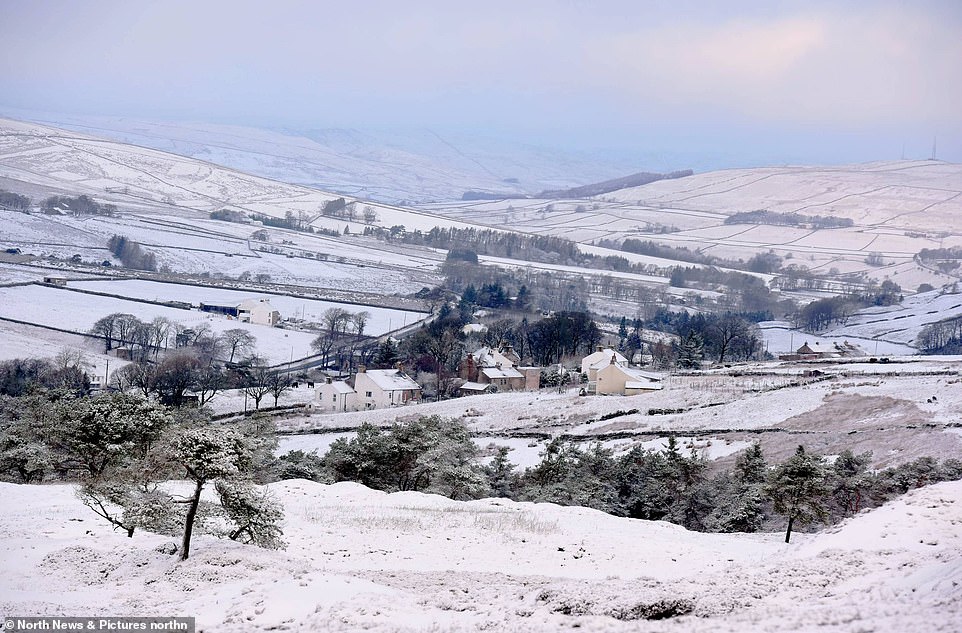 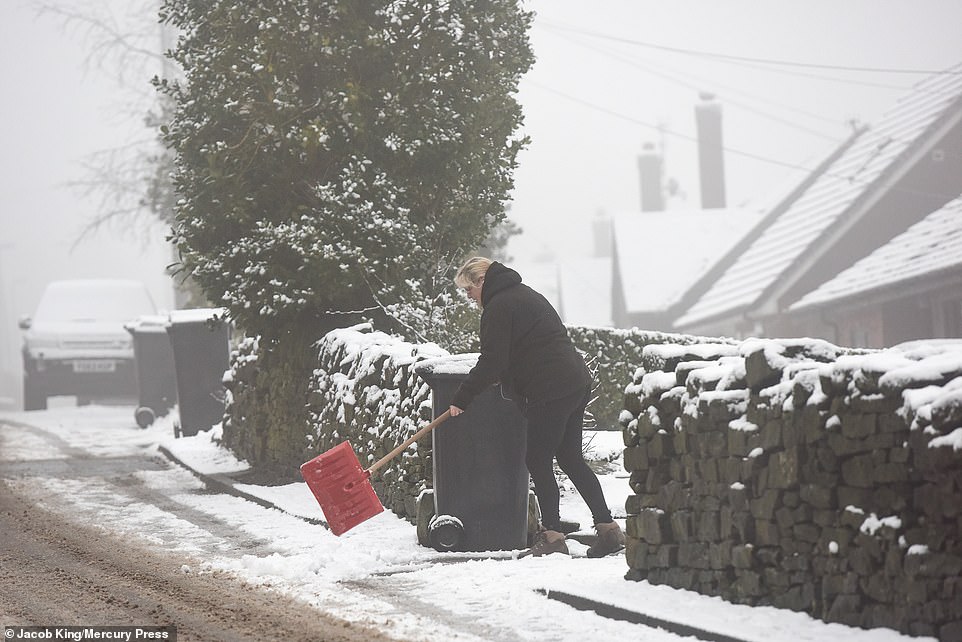 A woman holds a shovel as she moves her bin today after heavy snow fell in Saddleworth, Greater Manchester, overnight 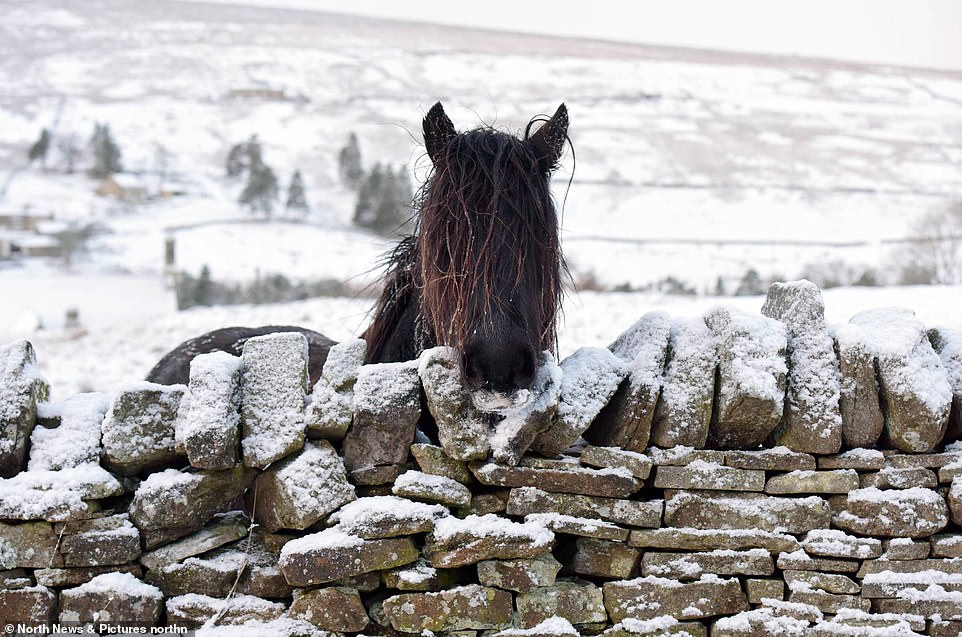 A pony peers over a snow-clad stone wall in Nenthead, Cumbria, today – in one of many picture postcard scenes in the North

Friday is set to be unsettled, but rain and hill snow is set to clear south-eastwards on Saturday, followed by ‘brighter and showery’ weather.

The Met Office and Public Health England have issued a series of cold weathe alerts for the country this week.

London and the South West are under ‘Level 1 – winter preparedness and action’, the South East and Midlands faces a warning for ‘Level 2 – alert and readiness’, while the North is under ‘Level 3 – severe weather action’.

Forecasters say there is a 90 per cent chance of severe cold weather, icy conditions and mostly hill snow until 9am on Friday in parts of England.

They say the weather could increase the health risks to vulnerable patients and disrupt the delivery of services. 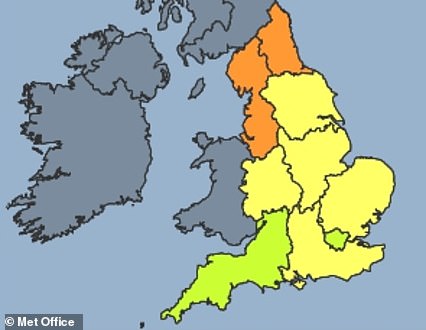 But it is set to remain very cold, some showers being wintry even at low levels, and gale force winds on northern and western coasts.

A Met Office spokesman added: ‘The final few days of January are likely to remain rather unsettled with brisk winds, outbreaks of rain and hill snow, as well as some showery interludes in between.

‘It will remain cold for most with widespread overnight frosts as well as the risk of ice.

‘Snow remains a possibility to lower levels, particularly in the north.’ Very cold conditions are expected to continue through mid-February ‘with a greater probability of northerly or easterly winds’.

The Met Office’s long-range forecast states: ‘This will bring an increased risk of snow to all areas and more widespread frost.’

Dr Emer O’Connell of Public Health England said: ‘Experience shows us that every winter thousands of people are seriously affected and even die from illnesses linked to the cold. Protecting yourself from the cold may seem like common sense but many people do not manage to keep themselves warm.

‘If you know someone at risk, someone over 65, anyone with dementia or a heart and lung condition, or a young child, check up on them and see if there’s anything you can do to help.

‘All of us should be heating our homes to at least 18C, keeping up to date with weather forecasts and planning our days around them – simple steps can really help protect against the cold.’

** Do you have any photographs of the snow today? Please email them to: [email protected] **