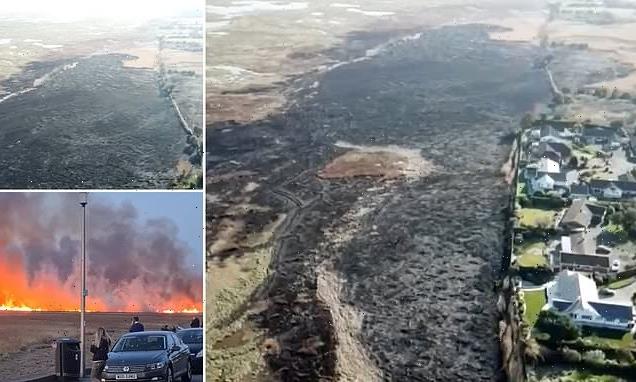 Scorched earth: Drone footage shows fire ravaged half a square mile of marshland in Cheshire as police search for group of teenagers in arson probe

Drone footage has revealed the damage wreaked by a fire that ravaged a large marshland site in Parkgate, the Wirral, yesterday evening – with the inferno requiring six fire engines to be extinguished.

The fire – which has left a deep, blackened scar across a vast area of marshland near Liverpool – forced dozens of people to be evacuated from their homes and burned for almost six hours before Cheshire Fire Service managed to get it under control.

Cheshire Police said they suspected the blaze was started deliberately, and that they wanted to speak to a group of teenagers who were seen at the site before the conflagration, which covered 0.4 square miles and began raging out of control at around 18:30 GMT on Saturday.

The police said they were looking for three boys and a girl, aged between 14 and 15, in connection with the suspected arson.

Two of the boys were described as wearing dark jackets, the third boy was wearing a light blue jacket and trousers, and the girl had long dark hair and was sporting a dark jacket. 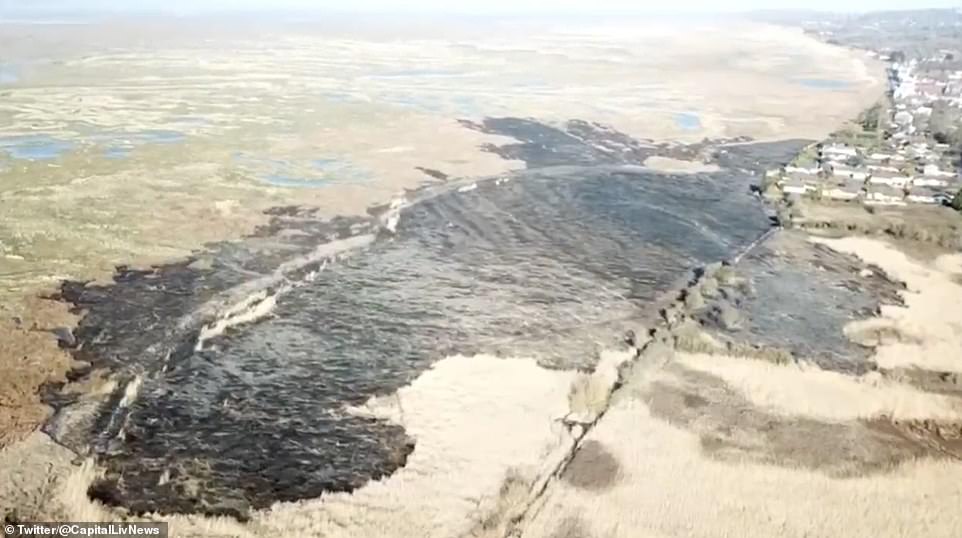 Drone footage this morning reveals the severe scarring suffered by a 0.4 square mile area of Parkgate marshland in the Wirral, following the breakout of a fire at 18:30 on Saturday 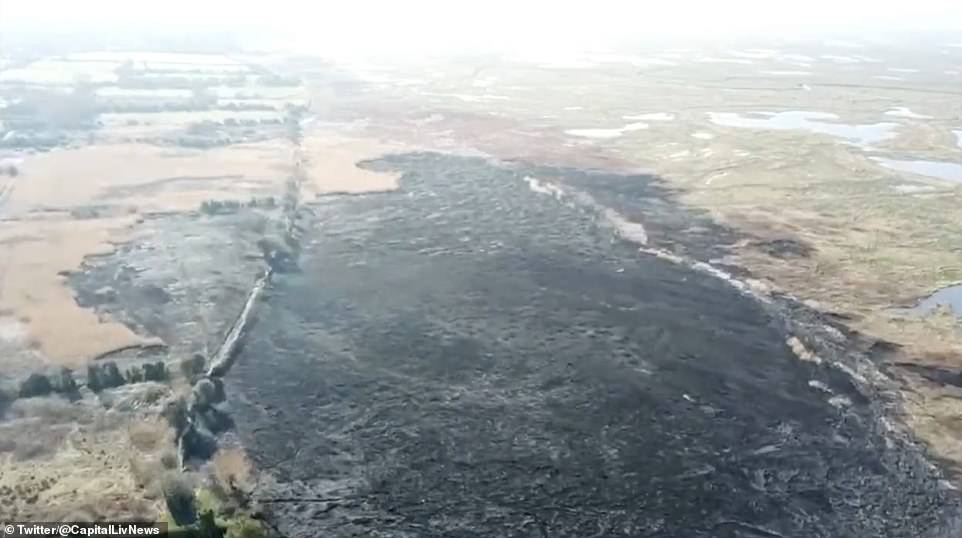 Cheshire Police said they suspected the blaze was started deliberately, and that they wanted to speak to a group of teenagers who were seen at the site before the conflagration

Video footage from the scene in Parkgate, in the Wirral, showed thick plumes of smoke bellowing into the air as the wind blew the flames closer to properties.

The raging inferno was visible from Flint in North Wales.

A fire investigator was called to the scene, with police saying they were treating it as a suspected arson.

A statement from Cheshire Fire Service last night said: ‘As the tide is coming in firefighters have withdrawn to a safe distance and are continuing to monitor the site for any potential flare ups.’

Crews stayed at the scene into the early hours of the morning today, and people have been asked to steer clear of the area as police cordons remain, the Liverpool Echo reports. 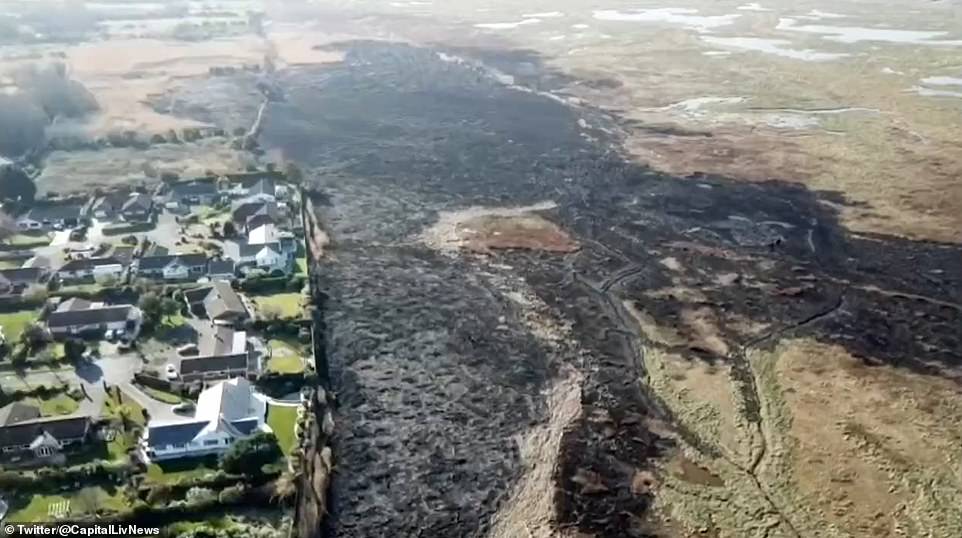 Six fire engines were scrambled to the site of the blaze, which raged for almost six hours before being put out at around midnight 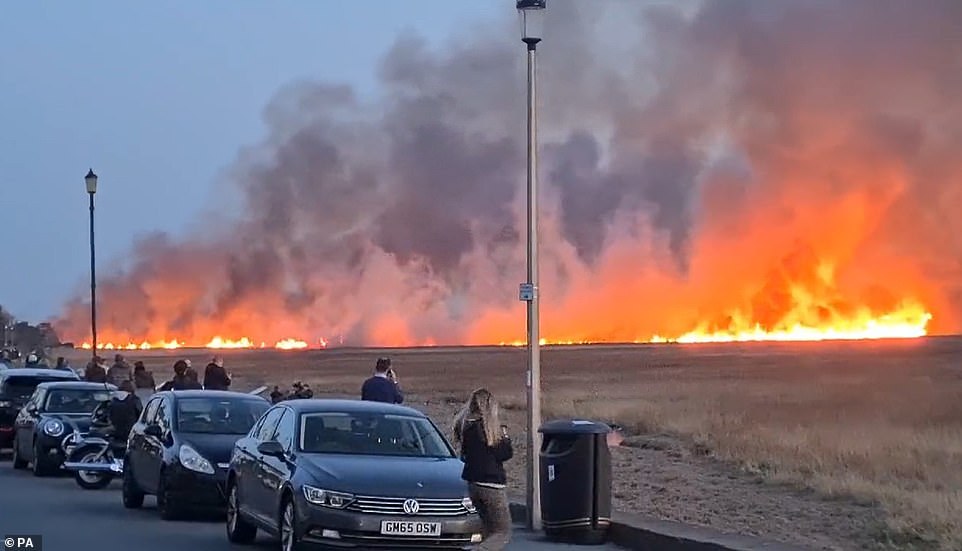 Police evacuated homes near The Parade while firefighters worked to protect buildings.

In video footage shared on Twitter, the blaze could be seen encroaching on someone’s back garden.

Firefighters were seen pumping out water onto the marshes on Saturday night in a bid to dampen the blaze’s ability to spread.

The area of Parkgate is on the River Dee and is adjacent to hundreds of square metres of marshland – which is home to nature reserve, sparking fears of a devastating ecological impact.

It is home to thousands of wildfowl and wading birds in the winter.

Eyewitness Peter Guy told the Liverpool Echo: ‘We’d just been eating a fish and chips enjoying the sunset when we turned around and saw a small fire about 300 yards away.

‘Within seconds it billowed into a huge wall of fire which ripped through the marshland – it was scary and spectacular all at the same time. 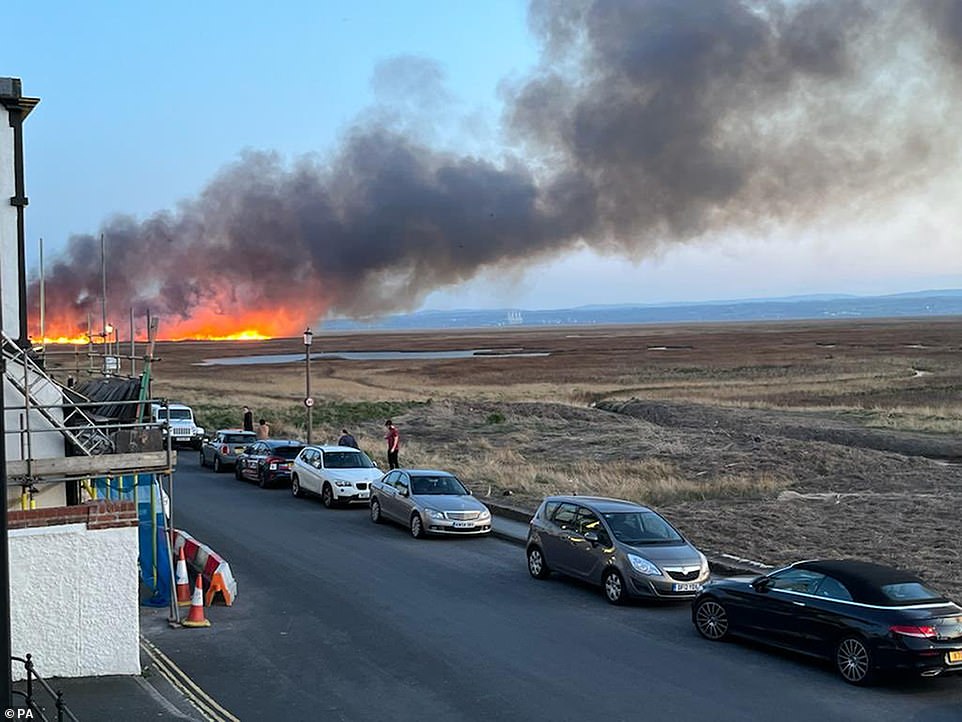 The area of Parkgate is on the River Dee and is adjacent to hundreds of square metres of marshland – which is home to nature reserve, sparking fears of a devastating ecological impact 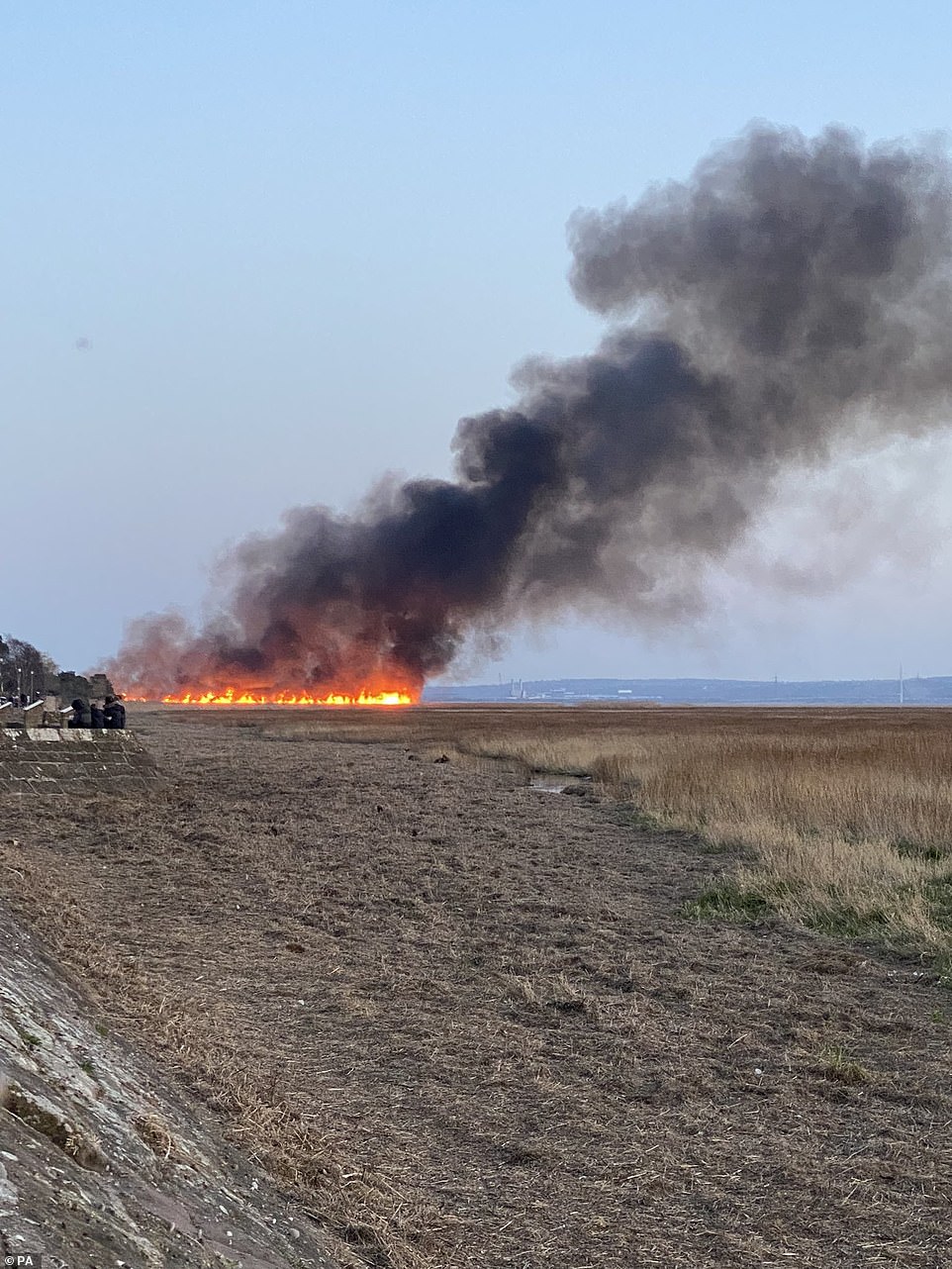 Huge plumes of black smoke bellow into the sky in Parkgate, some 10km from Liverpool city centre 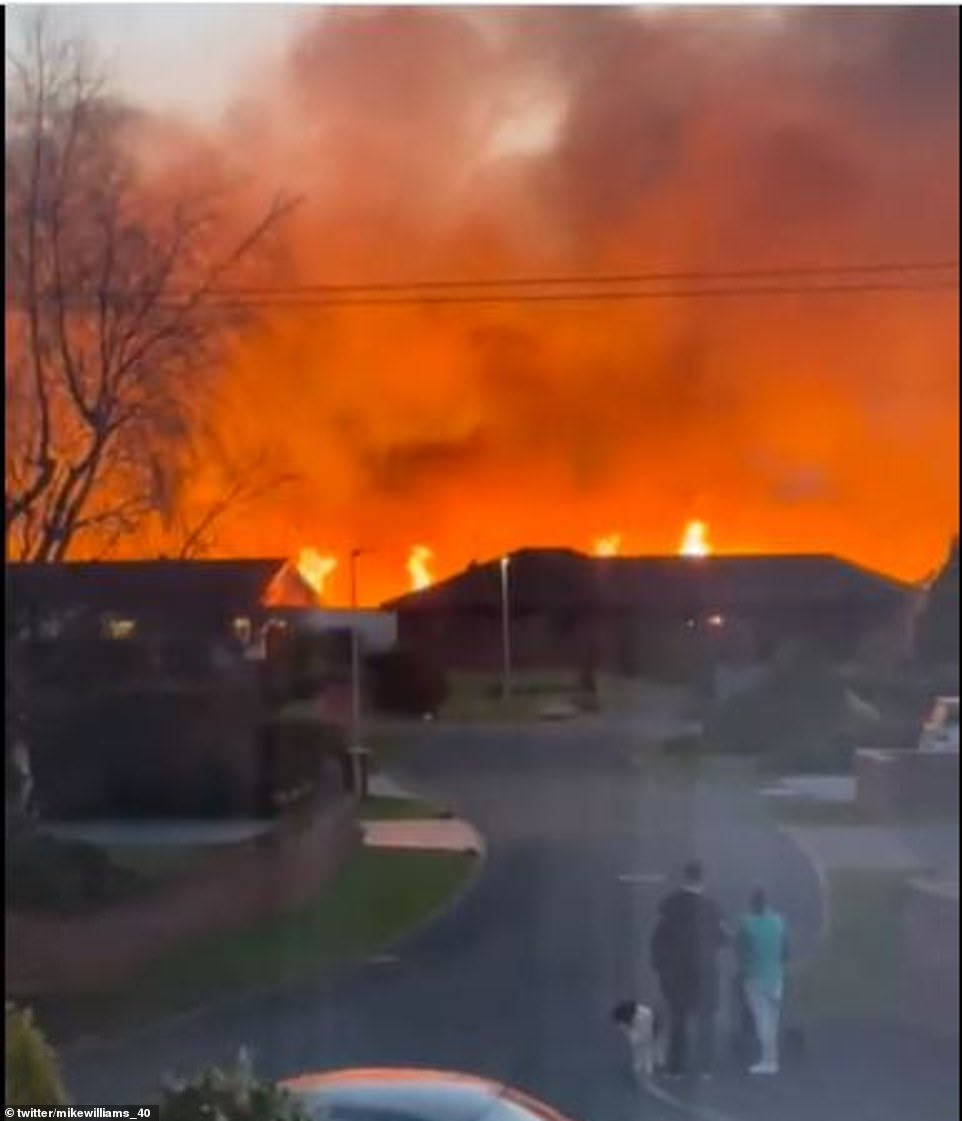 Police evacuated homes near The Parade while firefighters worked to protect buildings. (Pictured: Two locals walking their dog watch on in horror)

‘I’m sure lots of wildlife will have been affected or destroyed.’

‘Fortunately the wind which was fanning the flames was just off the line of residential housing.

‘There was a similar incident three years ago. This is more dramatic.’

At least six fire engines were sent to the scene, including two from Merseyside Fire and Rescue Service.