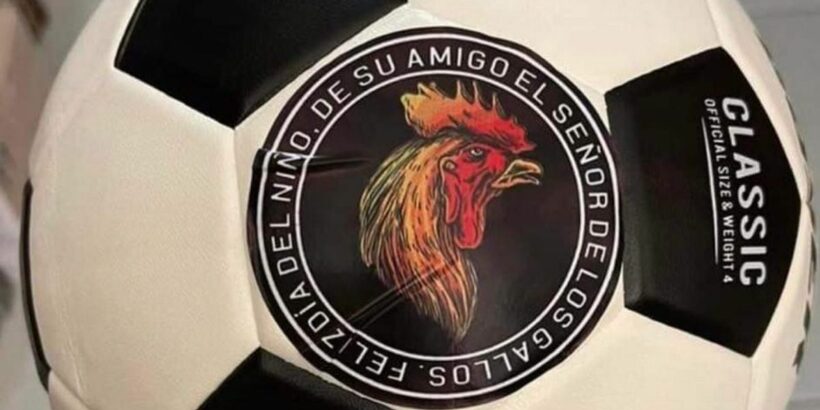 One of Mexico's most infamous cartels has launched a horrifying new scheme to try to appeal to the younger generation of the country's population.

The Jalisco Nueva Generación Cartel, which started as a splinter group from the famous Sinaloa Cartel in 2009, has been sending sweets, branded toys, games and sports equipment to youngsters.

The sick gifts were handed out on April 30, which is a day when Mexican's celebrate all children in the country.

Images flooded local social media accounts showing how the group – with its famed rooster head logo – had branded the toys, with bags of footballs among the most popular toys.

The sticker of the logo also said: “Happy Children's Day From Your Friends At The CGNJ.”

And a source from the group told local media that they were doing it to "win hearts and minds".

As well as footballs, images of swanky handbags – claiming to be from the genuine Gucci brand – were also given out.

Earlier this year, the powerful group declared a "purge" on its "scumbag" rivals.

Members of the cartel said it would return to business owners the cash that they have forked out for the United Cartels.

Armed and in uniform, CJNG's commander El Fantasma (Spanish for ghost) claimed in a video message that he has money the United Cartels extorted from normal citizens in Uruapan, Mexico.

In a Robin Hood-style pledge El Fantasma told viewers that anyone in the area who was made to pay the United Cartels can now claim it back.

The CJNG claim they found their rival's fee collectors and took from their possession all the cash that had been handed over to them in envelopes, including a list detailing who paid what.

El Fantasma said: "This message goes out to all the businessmen who’ve been harassed by the Carteles Unidos with their charging fees. I have proof of this here before me.”

He went on to invite everyone whose money they now have, to come and take it back and to not worry about the consequences.

Speaking from behind a table covered in envelopes, the commander continued: "That these scumbags live off of extorting the citizens of Uruapan. Peña, 14, and Galleta I have your charging fees here. Come and recover them.

"We will hold responsible the United Cartels for any reprisals that are made against the taxi drivers. Specifically you Nicolas Sierra Santana aka Gordo Viagra.

"Gentlemen, citizens of Uruapan, help us to help you. I know this is hard for you because you’re all afraid. But we are here now."