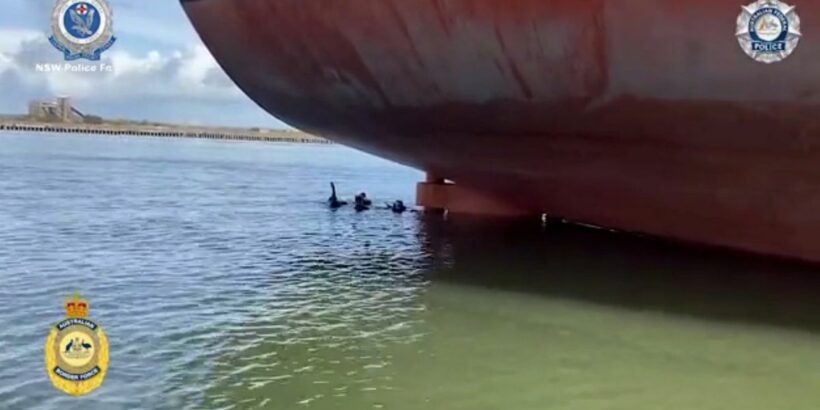 A dozy drug smuggler has left mob bosses furious after he accidentally dropped millions of pounds worth of cocaine into the ocean.

The hapless trafficking error was reportedly discovered in Newcastle, New South Wales, Australia, after a man in scuba gear was spotted floating through the city's busy port.

Members of the public and paramedics tried to resuscitate him, but he was pronounced dead at the scene.

Police claim the man had been trying to retrieve cocaine from a vessel when he mistakenly dropped it.

A man has since been arrested and charged for importing a controlled substance after 54kg (8.5st) of cocaine was found on the sea bed.

The sealed packages of cocaine were discovered in waterproof yellow casing and are thought to have a street value of $45million AUD (£25million).

Commenting on the find of the scuba diver, Detective Superintendent Rob Critchlow of NSW Police said: "We have done a number of checks and searched records and systems in Australia and we have failed to identify the man at this point"

"It’s very concerning this man has been left for dead basically to either die or when he did die and these people fled, and it’s quite disgusting, regardless of what he was (maybe) involved with."

Other police sources meanwhile reported that intercepted messages between international crime bosses showed that the shocking loss of the shipment had led to arguments.

An unnamed insider told the Daily Telegraph: "The guys in Australia were saying: 'There's no coke in the tyres'.

"On the other end they were saying: 'Well we put it there, you must have taken it'."

Police are yet to reveal the identity of the deceased man.

The Organised Crime Squad declared a warrant for 32-year-old Jhoni Fernandes Da Silva on Tuesday (May 17) in connection with the smuggling offence.