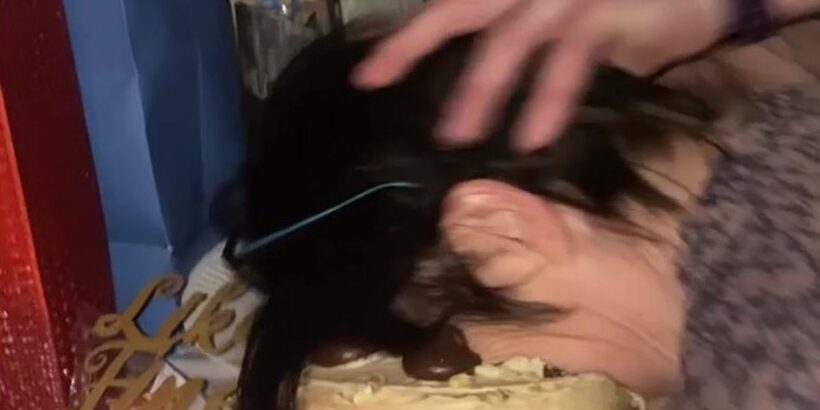 A drunk mum has had her face smashed into a birthday cake in an hilarious moment that nearly toppled the icing-covered woman over.

Honi Jones planned a surprise birthday for 50-year-old mum Aly Jones so they could celebrate the milestone birthday with family and friends after the pandemic.

While Aly admired the cake, prankster brother Danny Thompson, 47, grabbed her head and shoved it into the buttercream cake and chocolate icing.

The hilarious clip went viral online, racking up more than 362,000 views of Aly faceplanting the cake and briefly rolling around in it, before emerging from the sugary mess in a state of confusion.

The birthday was branded the "most eventful party ever" as Aly later went on to knock herself out when she fell over, before breaking her ankle.

Honi, from Gloucestershire, said: "Mum was sort of stood beside the cake and looking at it. The candles were then taken out and I believe she went back over to cut it [and] that’s when the cake smash happened.

"Mum's brother, my uncle, was stood behind her and was like 'I'm going to face smash her into the cake'.

The prankster's niece continued: "My mum's a bit crazy so we knew she'd find it hilarious. She'd lost her balance so kind of stayed in the cake for a while, then emerged back up.

Aly enjoyed the birthday festivities until jumping on the back of someone for a piggyback, where she subsequently fell and broke her ankle.

Panic over Aly "bleeding really badly" concerned party-goers, but when the lights came on it was revealed as just a bit of chocolate icing embedded in her hairline.

Honi said that a cousin offered her mum a piggyback ride where "she fell and he stepped on her foot."

She continued: "We were like 'she's down, she's fallen'. We ran to her and she was fine, then my dad picked her head up to make sure she was okay.

"He said 'oh my god, she's bleeding really badly'. We turned the lights on and it was chocolate icing all in her hair."

Aly admitted it was a birthday she would never forget, saying: "I'm always up for a laugh. I only remember up to a certain point and waking up the next day realising I'd broken my foot.

"I assumed my brother had put my face in the cake and while I was there, I decided to carry on. It was a birthday I'll never forget. It was a very good night though.

"I've only seen the video twice because it's quite embarrassing. I've never, ever in my whole life been that drunk before."

Prankster Danny added: "I think my immediate family expected it and my sister's husband's family was a bit like 'what the f**k'."