Washington: Mienke de Wilde doesn't leave home without a colander on her head. She wears it to class like a hat. It covers the top of her hair in the supermarket.

If you were looking for her in the crowd at a recent Guns N' Roses concert, she was the one wearing a pasta strainer with pride. She even wore it on a visit to the Vatican.

So it shouldn't be all that surprising that she also expects to be able to wear it in her licence and passport pictures. 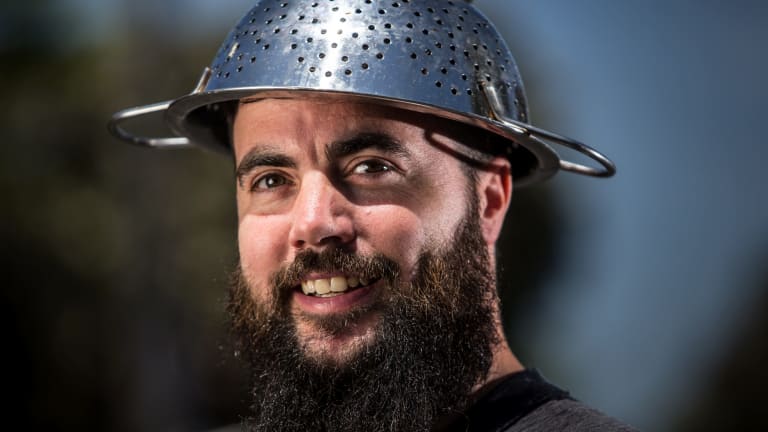 Marcus Browning managed to get his Vicroads licence taken with a pasta strainer on his head in 2016.

De Wilde, 32, is a Dutch law student who subscribes to the Church of the Flying Spaghetti Monster, or Pastafarianism. But this week, the Netherlands' Council of State determined that her belief system doesn't count as religion and thus rejected her request to keep the pasta strainer on her head in her government ID photos.

"At first of course I thought just like everybody else: Who are these jokers?" she said. But now she thinks "people fear what they don't know."

And to be fair, many people don't know about Pastafarianism. The group's website says it "came into the mainstream" in 2005, when Bobby Henderson, an American, wrote an open letter to the Kansas school board, claiming that if creationism could be taught in schools, then Flying Spaghetti Monsterism should be, too.

"I and many others around the world are of the strong belief that the universe was created by a Flying Spaghetti Monster," the letter said. "It was He who created all that we see and all that we feel."

It might sound like a joke, but the group insists it isn't. Well, at least not entirely. Its website states that some members believe in a literal spaghetti monster, and others don't at all. Some also believe that pirates "were the original pastafarians and that they were peaceful explorers."

Those who pray may end their prayers with "R'amen," instead of "Amen," giving a shout-out to the delicious noodle dish.

"We are not anti-religion, we are anti-crazy nonsense done in the name of religion," the group's website says.

So what exactly do pastafarians believe?

"The (serious religious!) moral is not to take your own opinion too serious, because extreme seriousness in religion is dangerous and makes violent fundamentalists of people," de Wilde told the Washington Post, adding that the worst kind of war they would want to see is a food fight.

And in some places, her demand to be respected for wearing a colander on her head might not be considered so outrageous. In New Zealand, pastafarians can legally conduct marriages. In Russia, at least one man has successfully posed for his license photo while wearing a pasta strainer. There's even a documentary film being made about the group.

But the Dutch Council of State said that religions must have "seriousness and coherence" and that Pastafarianism has neither. "It may be the case that the colander is considered a holy object for pastafarians, worn in honour of the Flying Spaghetti Monster but there is no obligation to do so," the ruling said, according to The Guardian.

Until recently, Derk Venema was teaching philosophy of law at Radboud University in Nijmegen. It was there that he introduced his students to the concept of pastafarians. He is not a member of the group, but he said in a phone call that he thought it served as a good example as "what problems you could get into when you have fundamental right of freedom of religion." Certain people or institutions will end up having "to decide what counts as a religion and what doesn't," he said.

Around the same time, a different pastafarian was also arguing that he should be allowed to wear the pasta strainer on his head for ID photos. Venema had agreed to serve as his legal representative for a hearing, and a few of his students joined for the excursion. One of them was de Wilde, who just got more and more interested in the group from there.

"It was like 'Monty Python,' " Venema said. "He really played his role very well as a very disappointed, deeply religious pastafarian who was denied the rights that adherents of other religions do get. And so this committee, they had to listen to it with a straight face, and try to take him seriously."

Like de Wilde, that man lost the case. But for her part, de Wilde is planning to try again; she hopes next time will be at the European Court of Human Rights. And Venema, who is not a practising lawyer but served as her legal adviser during the recent case, said there was "definitely a chance" they could win.

"Don't we all believe in invisible (noodle-like) waves in the sky?  Radio waves, Wi-Fi, satellite connections?" de Wilde said. "So maybe it is more believable than believing . . . people who can walk on water, or who can split the sea, [or] virgin birth."