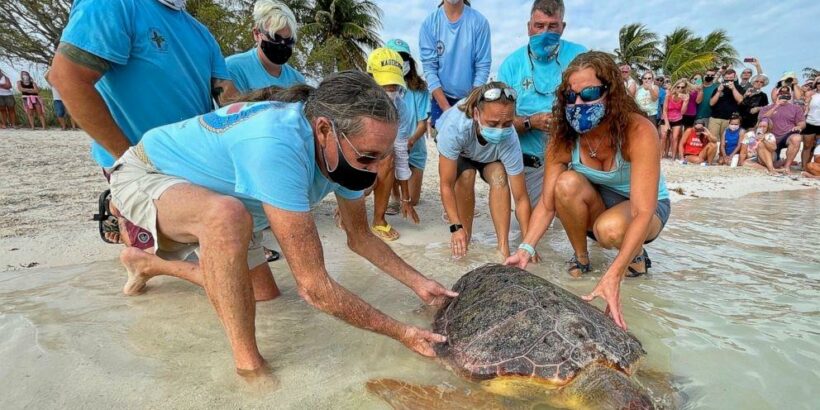 MARATHON, Fla. — Staff from the Florida Keys-based Turtle Hospital released a rehabilitated loggerhead sea turtle back to the ocean on Thursday to mark Earth Day.

Nicknamed “Sparb,” the 125-pound (57-kilogram) sub-adult sea turtle was rescued in late January after being discovered floating offshore, unable to dive, with severe wounds and a missing front right flipper.

Typically, sea turtles admitted to the facility are named by their rescuers. Among Sparb’s rescuers was a Keys resident who wished to honor her late husband, who had that nickname and lost his right leg.

When the endangered reptile arrived at the Turtle Hospital, it was in critical condition and was not expected to survive. Treatment included a whole blood transfusion, broad-spectrum antibiotics, extensive wound care, laser therapy, fluids, vitamins and a nourishing diet of fish and squid.

“We are at that sweet spot in time, there’s an awareness,” Zirkelbach said. “I really believe that today with awareness that every day is Earth Day.

The Turtle Hospital has been rescuing, rehabilitating and returning turtles to the wild for more than 35 years.