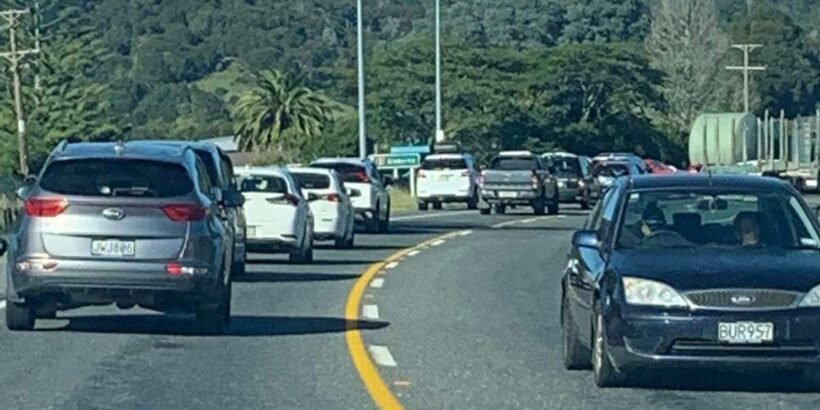 In the dead of night, it came – a violent shaking at least one person thought was an evil spirit.

That would be the first earthquake – a 7.3 magnitude beast that struck off the North Island just before 2.30am.

It would hit just before two other monster quakes early today – the second a 7.4 magnitude shake reported at 6.41am before the huge 8.1 magnitude quake in Kermadec Islands at 8.28am.

The latter has resulted in tsunami warnings on coastal areas, particularly in the North Island, and has seen a mass exodus of people to higher ground or far inland.

AJ Edwards was one of thousands of Kiwis woken up in the early hours of the morning after the first quake hit.

“I’m so unaccustomed to earthquakes and was in a zombie state, I thought it was an evil spirit.

“When I came to, it was still going for about another 30 seconds – and that’s when I knew it was an earthquake.”

The 33-year-old, of Lower Hutt, is holidaying with three friends in the Hawke’s Bay and staying on Waimārama Beach.

“I got up and started waking everyone up, one by one. By then the shaking had stopped.”

The friends did not receive any sort of warning via text or emergency alarm to evacuate and did not hear any sirens go off.

There was no information online about the shake either – so they decided to go back to bed.

“I lay down and just as I closed my eyes, I heard a couple of cars go past.

“I got up and Googled ‘earthquake New Zealand’ and that’s when I saw the Civil Defence message.

About 10 other cars were up on the hill in Havelock North, he said, and they stayed there until about 4am when they were told by authorities it was safe to return.

Edwards said they had been keeping a close eye on the water in case of any signs that it was receding – indicating a possible tsunami.

“That’s why I was panicking so much before – because we’re across the road from the beach.

“When we got back, I looked out and it just seems a lot rougher than it was yesterday.”

That first big quake was felt up and down the country – from Gisborne, Whakatāne, to the Hawke’s Bay and Wellington – according to felt reports registered on the GeoNet website.

“I felt it as clear as if it was happening underneath me,” he said.

“That was a bit of a doozy. It woke me up – I have the map in from of me. She certainly was a jolt. To be far away and it still got to us – if you are near the water folks, get away,” he warned.

Binny Huriwai said the shake had “scared the bejesus out of us”.

“Here in Te Araroa … that’s one way to wake us,” she wrote on Facebook.

“Some of our whānau in the township have headed to higher ground.”

Waitangi Chelsey showed that many had heeded to the message that if an earthquake is long and strong – get gone.

“We are in Te Araroa – township evacuated to high ground almost straight away.”