Known as Moai by the Rapa Nui people who created the figures in the tropical South Pacific directly west of Chile, these huge statues were carved from stone found on the island between 1100AD and 1500AD. Nearly half are still at Rano Raraku, the main moʻai quarry, but hundreds were transported from there and set on stone platforms called ahu around the island’s perimeter. The moʻai are the living faces of deified ancestors, but over time, archaeologists have discovered that parts of the statues have become buried into the sediment and rock.

A team of experts at UCLA developed the Easter Island Statue Project to better study and preserve the artefacts.

Through this work researchers excavated several of the heads to reveal the underlying torso and body.

Jo Anne Van Tilburg, a researcher at the University of California, said in 2012: “The reason people think they are [only] heads is there are about 150 statues buried up to the shoulders on the slope of a volcano.

“These are the most famous, most beautiful and most photographed of all the Easter Island statues. 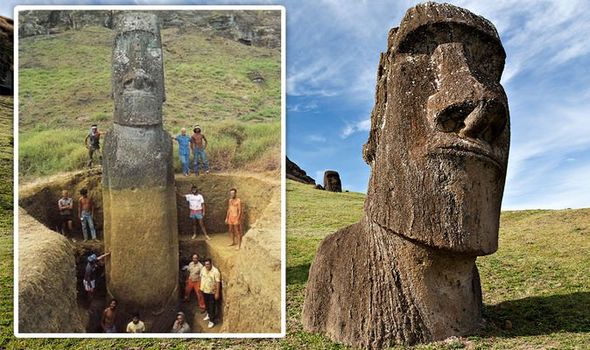 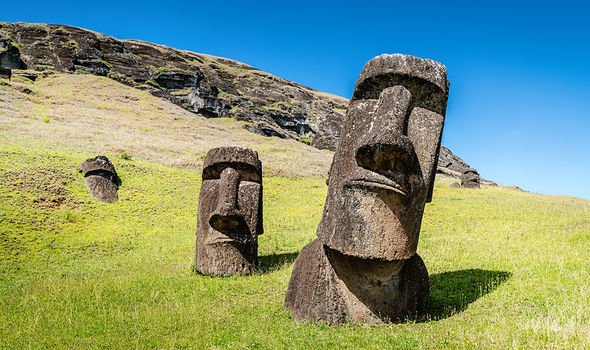 “This suggested to people who had not seen photos of [other unearthed statues on the island] that they are heads only.”

In total, the team documented and studied almost 1,000 statues on the small Pacific Island.

The project spanned nine years whereby the team determined to the best of their ability the meaning, function and history of each individual statue.

After approvals, the archaeologists excavated two of the Easter Island heads to reveal their torso and truncated waist.

The heads had been covered by successive mass transport deposits on the island that buried the statues lower half. 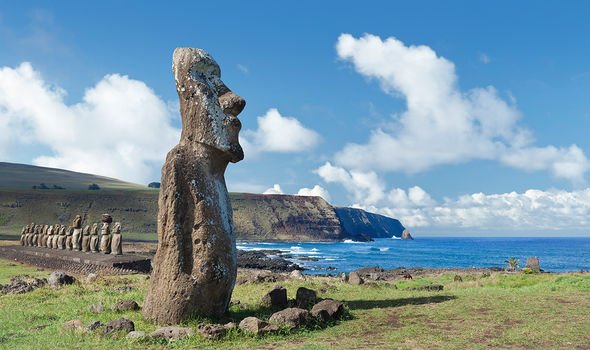 These events enveloped the statues and gradually buried them to their heads as the islands naturally weathered and eroded through the centuries.

Easter Island is situated within the Nazca Plate and is a volcanic hot spot which produced the Sala y Gomez ridge which spans east as the Pacific Ocean opened through the East Pacific Rise.

The island itself was formed by successive Pliocene and Holocene volcanic flows consisting of basalt and andesite.

In addition, volcanic tuffs were deposited in the volcanic crater, which is the primary stone used for carving the monolithic Moai statues.

Most of the statues are located along the Rano Raraku volcanic cone, which acted as the quarry that supplied the Rapa Nui the monolithic stones which were used for carving.

While excavating the statues the team found etched petroglyphs on the backs of the figures, commonly crescent shaped to represent Polynesian canoes. 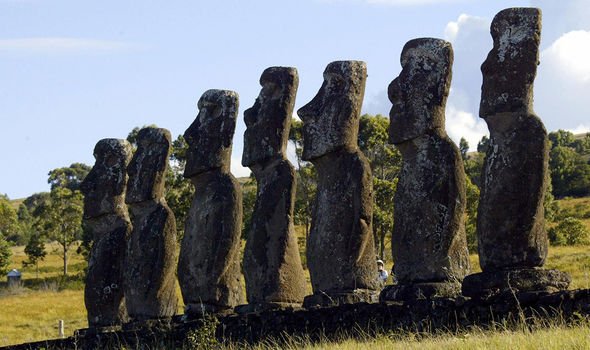 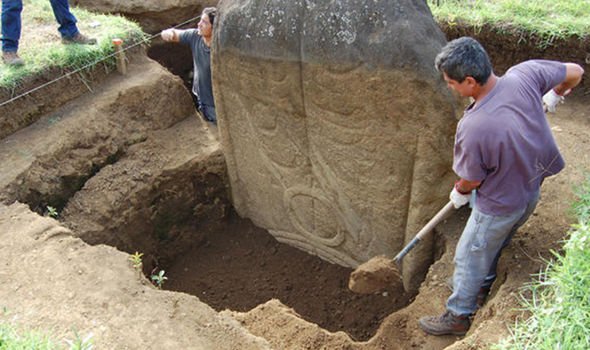 The canoe motif is likely the symbol of the carver’s family, providing clues as to different familial or group structures on the island.

In order to carve and place the statues upright the Rapa Uni used large tree trunks that were placed into deep holes adjacent to the statues.

They then used rope and the large tree trunk to lift the statue upright in place.

The Rapa Nui carved the heads and front side of the statues while they were lying on the ground, then completed the backs after uprighting the stone statues. The tallest of thee statues comes in at 33 feet high and is known as Paro.

Abundant red pigment was found at the human burial sites of several individuals, suggesting that the statues were painted red likely during ceremonies.

These burials often surround the statues, suggesting that the Rapa Nui buried their dead with the family’s statue.