A record-breaking heatwave scorching most of eastern Australia shows no signs of letting up with another week of 40C heat to come.

Sydney will get a reprieve on Monday after temperatures dropped 9C in just 20 minutes on Sunday night from a high of 39C – and far worse in the suburbs.

The mercury will be at just 24C on Monday before rising back to 29C on Tuesday, the first day of summer.

Though the city will be spared the brunt of the heatwave this week, inland areas will suffer more skyrocketing temperatures without much relief. 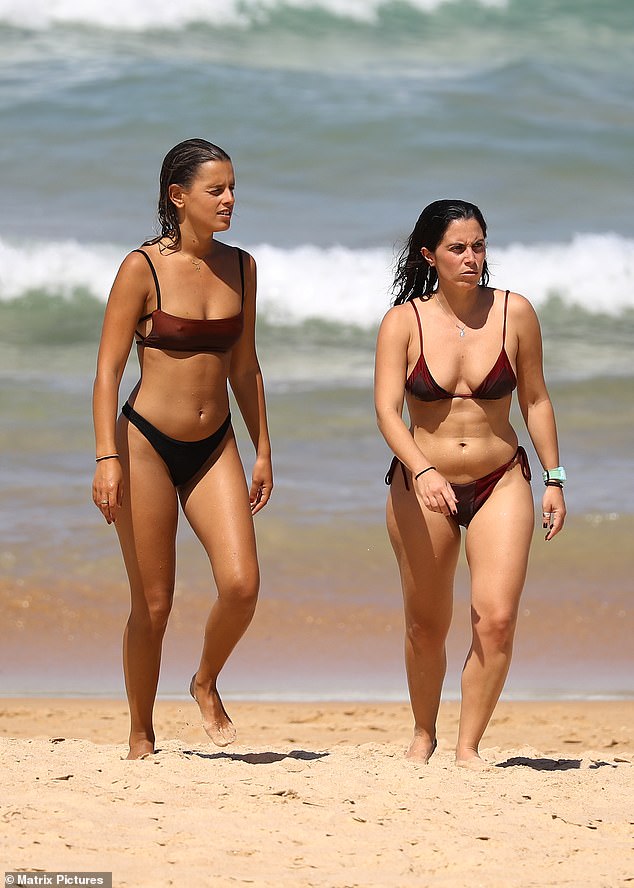 A record-breaking heatwave scorching most of eastern Australia shows no signs of letting up with another week of 40C heat to come. Pictured: Beachgoers cool off at Manly Beach on Saturday 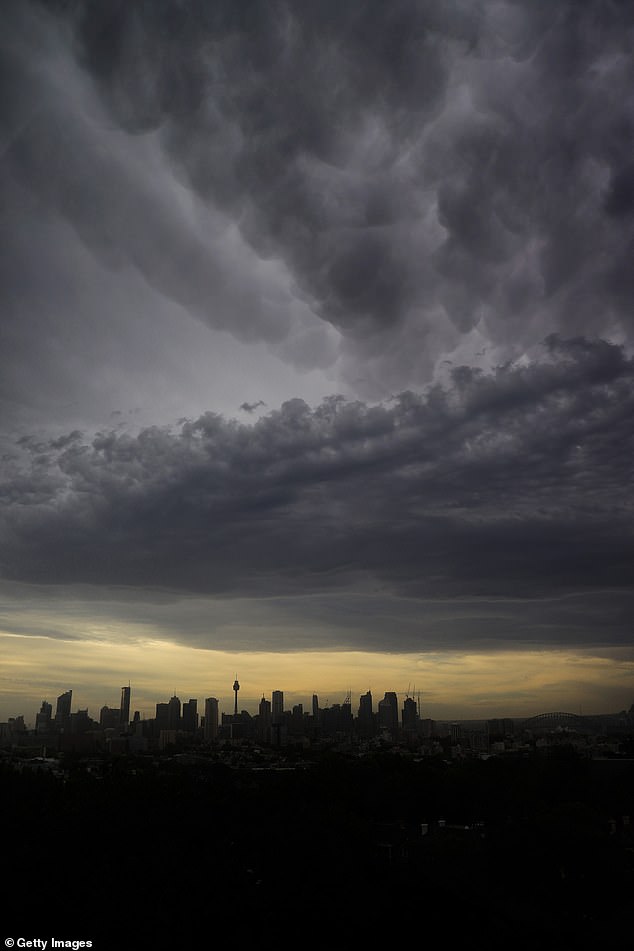 A southerly buster brought a cool change in on Sunday evening, dropping temperatures by 9C in just 20 minutes at Sydney Airport 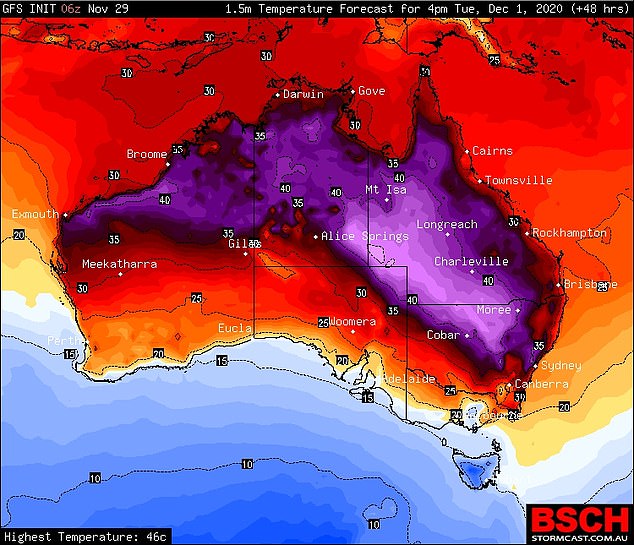 Scorching weather in the country increases the likelihood that more than 100 busfires that sprung up in a few days will only get worse.

A southerly buster brought Sydney the gift of a wild drop in temperature on Sunday night, along with wind gusts of up to 80km per hour.

The Bureau of Meteorology announced the cool change just before 6pm with a 9C drop in just 20 minutes.

‘Here it is! That sweet cool relief is finally making its way through Sydney. Airport just dropped from 35 degrees to 26 in 20 mins while Bellambi saw a 10 degree fall in 1 hour,’ the Bureau tweeted.

The southerly change was predicted to move into the Hunter region north of Sydney later on Sunday.

The Bureau says Monday will be a comfortable 24C for the 5.2 million Sydneysiders who suffered through a weekend heatwave that brought temperatures over 40C.

The cool change will bring relief across much of the eastern states, with the ACT and Melbourne both forecast to reach a comfortable maximum of 25C on Monday, while Hobart will reach 22C.

But duty forecaster Rose Barr told Daily Mail Australia the relief would be limited to the east of the dividing range, however, with the north and west of NSW continuing to top 40C. 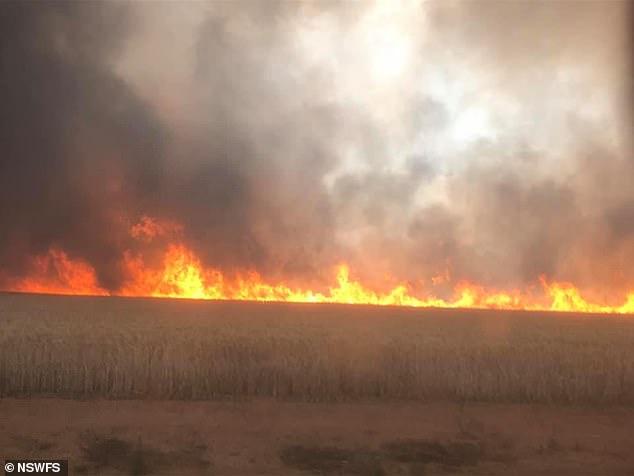 Dangerous fire weather has been predicted for much of the NSW north and west on Tuesday (pictured, Berrigan in the NSW Riverina)

High wind speeds will also bring dangerous fire weather on Tuesday for much of the north and west of the state, she said.

There are more than 60 bushfires still burning in NSW alone still burning and more could spring up with high winds and extreme heat.

‘As soon as we get a fire call, we’re sending everything we can to it to limit the spread of these fires,’ he said.

‘Just because we’ve had some rain in the past few months doesn’t mean the risk is eliminated, because it isn’t – it’s a different risk this year.

‘I’d rather not be on the back of a four-year drought, which is what we were in last year… [we’re] definitely better positioned but nonetheless it’s a risk.’ 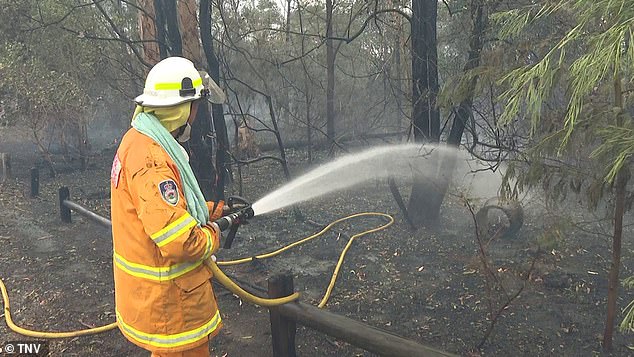 He warned people not to be complacent after last years unprecedented fire season that burned an area three times the size of Ireland, destroyed 2,476 homes and claimed 26 lives.

Even though a huge amount of the state was blackened, 90 per cent was untouched and thus vulnerable to fresh fires.

Temperatures are set to rise again later in the week after Wednesday, however Ms Barr said NSW would not suffer the extreme temperatures for the rest of the forecast period.

The record-breaking heat over Saturday and Sunday broke records for overnight temperatures in excess of 25C and put November on track to be the hottest ever recorded.

Summer does not officially start until Tuesday, December 1, but the heat was so nasty that the Australian Energy Market Operator warned there might not be enough reserve power for NSW on Sunday afternoon as people cranked up their air conditioning to full capacity.

On Saturday, Ambulance NSW recorded its third busiest day on record with crews responding to 3,356 emergency calls for help  with older people and infants most at risk of heatstroke and other heat-related maladies. 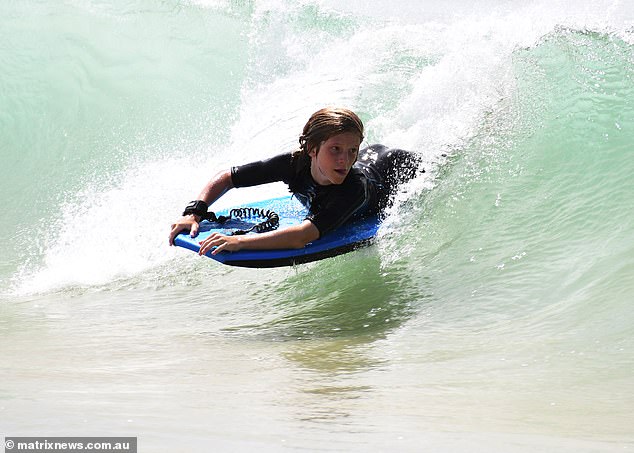 Eastern staters will flock to the beaches again on the weekend with temperatures set to rise again. Pictured: a boogie boarder in Sydney on Sunday 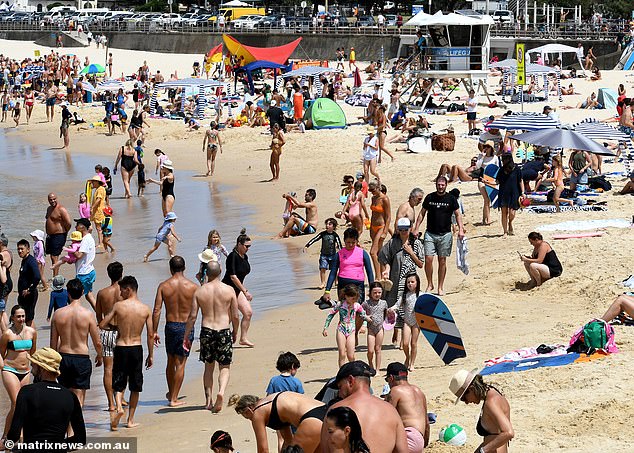 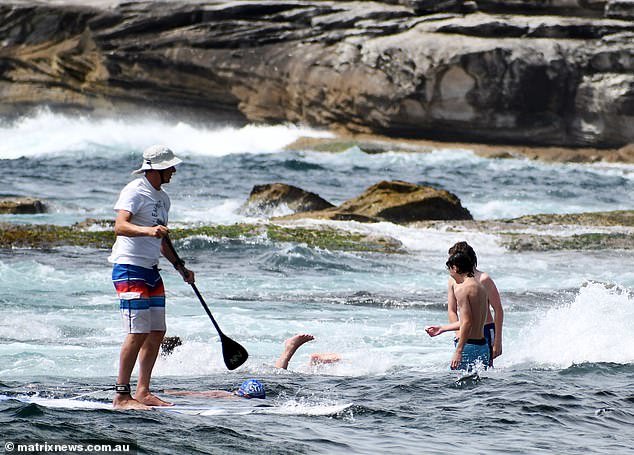 A paddleboarder enjoys the water on Sunday in Sydney

Beaches in Sydney’s eastern suburbs were relatively busy on Sunday afternoon, however they weren’t as packed as on previous days this spring.

Coogee, Bondi and Bronte drew large crowds, but there was still plenty of space on the sand for beachgoers to socially distance.

Southeast and southern Queensland are likely to experience elevated temperatures from Monday, with no respite until at least Thursday.

Brisbane residents are set for warm weather with forecast tops of 31C on Monday and Tuesday rising to 34C on Wednesday.

Brisbane temperatures were milder over the weekend, staying below 30C at Brisbane Airport however it was still hot enough to burn the paws of a dog walking on a hot road.

Humphrey, an 18-month-old groodle, had been playing around the edge of the pool at his Sunshine Coast home for about 40 minutes when he suffered burns to his paws.

Veterinarian Gabby Capell warned pet owners to be cautious about letting their pets walk on surfaces that conduct heat, including bitumen, concrete, pavers and sand this summer.

Temperatures are set to cool in South Australia and Victoria on Sunday afternoon, however Adelaide residents will have another hot Monday at 33C before relief comes on Tuesday.

WEATHER FORECAST IN YOUR CITY