Local residents and doctors say at least five killed on Thursday morning, despite Russian claims of a ceasefire.

Residents of Syria’s Eastern Ghouta are “mocking” a so-called ceasefire in the area, as bombardments by the Syrian government and their principal ally, Russia, continue, according to doctors and local activists.

At least five civilians were killed on Thursday in attacks on several towns in rebel-held Eastern Ghouta – a suburb of the capital Damascus – activist Abdelmalik Aboud told Al Jazeera from the town of Douma.

Fayez Orabi, spokesperson for the opposition’s health directorate in Damascus and its suburbs, and the UK-based monitoring group, Syrian Observatory for Human Rights, confirmed the numbers.

The Syrian Civil Defense – a volunteer rescue group also known as the White Helmets – said a child was killed in the attacks.

“The people of Eastern Ghouta mock the news of exit corridors – they did not believe it for a second because they have lost all confidence in the regime’s credibility – particularly because the shelling has not stopped, and neither the Russians nor the regime have expressed any seriousness in keeping civilians out of the war,” Aboud said.

Several attempts at a ceasefire in Eastern Ghouta have failed in recent days.

The area is a key target due to its proximity to Damascus, where the government of President Bashar al-Assad is based. 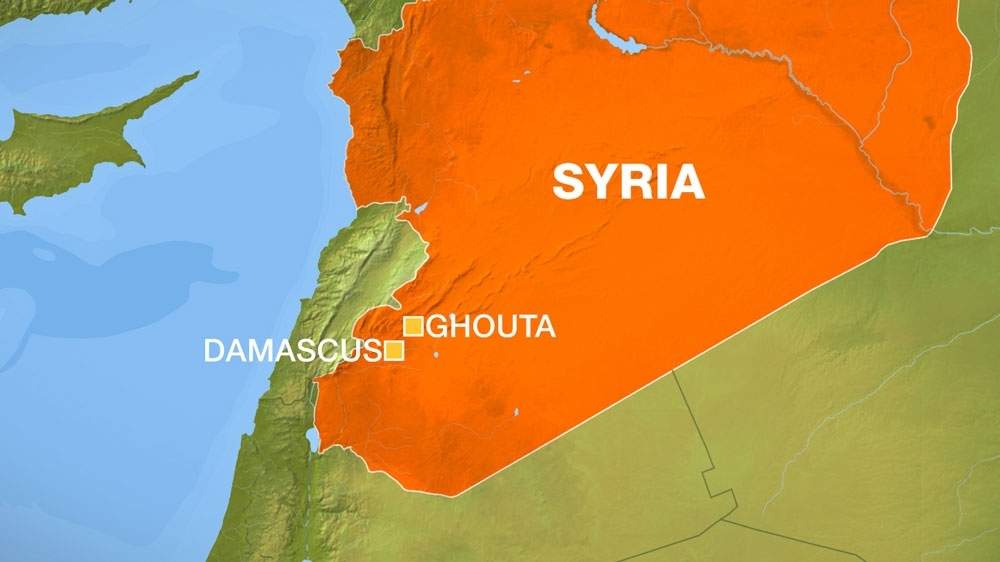 Eastern Ghouta has been under control of armed opposition groups since 2013 – two years into a popular uprising in Syria calling for the removal of al-Assad.

When the government responded with force, locals and army defectors decided to take up arms and managed to gain control of large territories across the country.

With Russia’s intervention in 2015, Assad’s forces have been able to regain most of the territory, but Eastern Ghouta remains one of the last armed opposition strongholds.

The area has been under a suffocating siege by government forces since 2013, in an attempt to drain the armed opposition operating there.

While Russia and the Syrian government say they are aiming at armed groups, who it refers to as “terrorists”, civilian neighbourhoods and sources of livelihood have been attacked frequently.

According to the Syrian Network for Human Rights, about 19 markets, seven medical centres, six schools, three kindergartens and 10 civil defence centres have been hit since November 2017.

The government’s campaign to regain control over Eastern Ghouta intensified on February 18. Since then, more than 500 civilians have been killed, including women and children, according to local activists.

“One cannot describe the level of monstrosity over the past few days,” Abu Salem al-Shami, an activist in the area, told Al Jazeera.

On February 24, the United Nations Security Council voted in favour of a 30-day truce, which was violated only hours later.

And, on February 26, Russia said it would implement a five-hour ceasefire daily as well as evacuation corridors to allow the area’s 400,000 residents to escape the bombing campaign.

But residents say neither the ceasefire nor the corridors have been implemented.

“The shelling has not stopped. The [Syrian] regime has not abided by the timings of the ceasefire. The violations of the truce are constant – 24 hours a day,” Aboud said.

Al-Shami explained that people are very careful not to walk in the streets as they have “no faith” in any ceasefire.

“There were people being killed from the moment the so-called ceasefire was announced. The warplanes are constantly in the sky, day and night. A real truce would mean that people can leave their homes, buy food and drink and that humanitarian aid would be able to come in, but that hasn’t happened.

“It’s the exact opposite,” he added.

Due to the siege, very little humanitarian aid has entered Eastern Ghouta, making access to basic supplies such as food and medicine highly restricted.

According to the United Nations, nearly 12 percent of children under five in Eastern Ghouta suffer from acute malnutrition – the highest rate ever recorded since the start of the war in Syria, which has killed close to half a million people.