Why DID Air Miles Eddie use private jet costing at least £10,000 to fly to Birmingham then Dorset in one day? Palace refuses to explain logic behind 300-mile trip between engagements when train was far cheaper

Buckingham Palace has refused to explain why Prince Edward took a private jet potentially costing taxpayers at least £10,000 for two trips of less than 300 miles.

Tenth-in-line-to-the-throne Edward, styled the Earl of Wessex, has been slammed for a ‘blatant abuse of public money’ after the ‘extravagance’ of his trips.

The Queen’s youngest son, 54, travelled from Hampshire – the Palace will not say where – to Birmingham Airport yesterday morning before attending an event in Tamworth marking the death 1,100 years ago of Anglo-Saxon ruler Aethelflaed.

Later in the day he returned south, going from Birmingham Airport to Bournemouth in Dorset to attend an event in Poole in the evening.

The normal cost to hire a Cessna Citation XL private jet (which Edward used) to fly between the West Midlands city and the South Coast could be between just over £5,000 and tens of thousands of pounds, depending on the day. 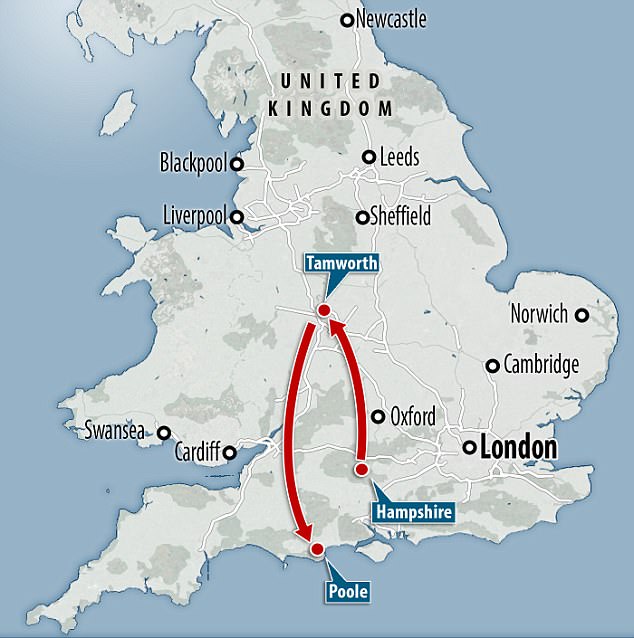 Prince Edward used a private jet to travel between Poole and Tamworth, a distance of 130miles, before returning to Hampshire 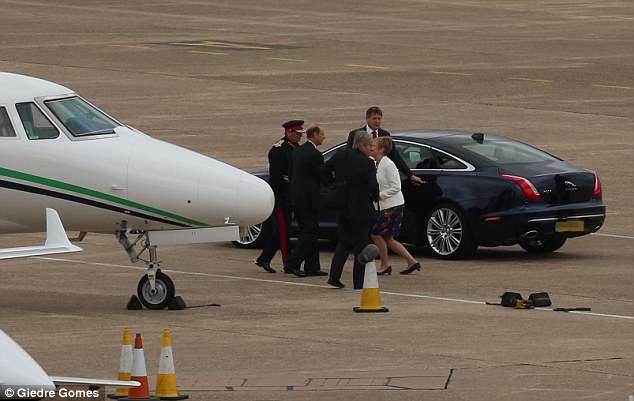 To fly from Southampton – Hampshire’s largest airport – to Birmingham costs between about £5,000 and tens of thousands of pounds, likewise depending on the day.

A first-class train ticket from Hampshire to Birmingham would have cost around £250 per person. A normal ticket would have been under £100.

He told MailOnline: ‘This is a blatant abuse of public money. If that were an MP they’d be in serious hot water.

‘We need to look more seriously at the extravagance of the royals. He should be taking public transport or cars at a fraction of the cost.’

Edward’s exact itinerary was not made clear by Palace officials, who did not disclose where he started and ended the day yesterday.

They also refuse to explain why he needed to take a plane.

Speaking to MailOnline, a palace spokesperson said: ‘The Earl of Wessex is undertaking a three-day programme of events, including a national service of commemoration, and engagements in support of the DofE.

‘As ever, security, effective use of time, and the need to minimise disruption to others is taken into account when decisions are taken about transport.’

Edward was in Windsor on Monday and was pictured landing in Birmingham yesterday lunchtime. He has engagements in Poole, Dorset today. 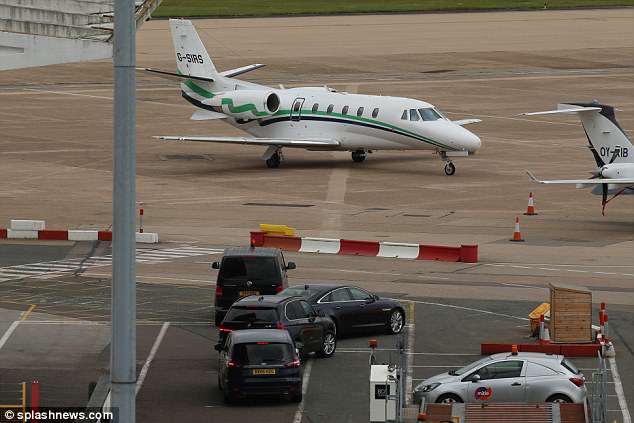 It is believed Prince Edward flew between Bournemouth and Birmingham on the jet at a cost of up to £6,000 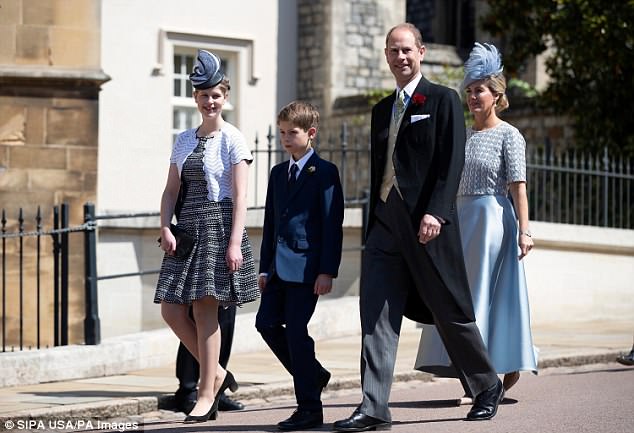 Graham Smith from anti-monarchy campaign group Republic blasted The Earl of Wessex, pictured here at the royal wedding, for his ‘extravagance’ with public funds

The Queen had carried out 25 per cent more engagements in the first half of this year than she did in the same period of 2017.

According to the blog Write Royalty, she has undertaken an impressive 125 official duties since January.

Although many are now being held behind palace walls, with official making attempts to curtail strenuous travel, it is still a remarkable achievement for someone of her age.

Prince Charles topped the list of the busiest royals of 2018 with 83 engagements in May alone and more than 250 since the start of the year.

Princess Anne was hot on his heels with more than 200.

By contrast new father William was seventh in the royal league table with just under 100 engagements. Prince Harry, however, failed to even make the top ten.

The three-day programme will be focused on Dorset, with Prince Edward visiting Sunseeker International, a luxury yacht company, this afternoon, before attending dinner at Brownsea Castle.

Edward missed Trooping the Colour on Saturday after returning from a visit to Hong Kong on the same day.

However, his wife Sophie, the Countess of Wessex, and daughter Lady Louise, 14, both attended the traditional parade marking the Queen’s birthday.

Edward’s medals could be seen on display as he was driven from the airport to the service yesterday.

He joined the Royal Marines in 1986 after graduating from the University of Cambridge with a 2:2 in history. He had been allowed on the elite course despite earning A-level grades far below what is usually required.

Edward, however, did not stay in the Marines, dropping out in 1987 after barely beginning his training.

He was attending a service at Tamworth’s at St Editha’s Church to mark the 1,100th anniversary of the death of Aethelflaed, who ruled the ancient kingdom of Mercia for seven years from the year 911 until her death.

She was the eldest daughter of Alfred the Great, who was King of the Anglo-Saxon kingdom of Wessex. 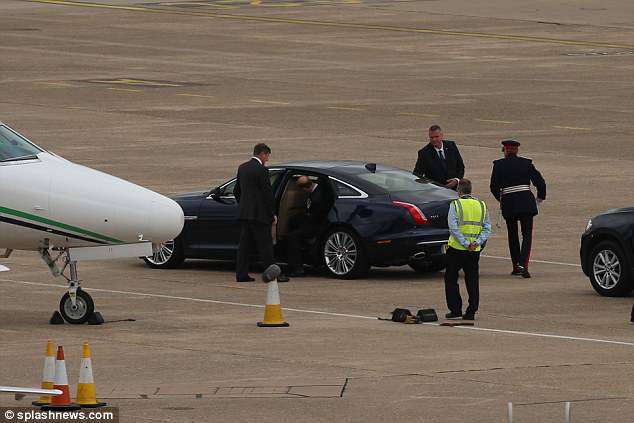 The Earl of Wessex, 54, was driven away in a Jaguar after touching down in the plane 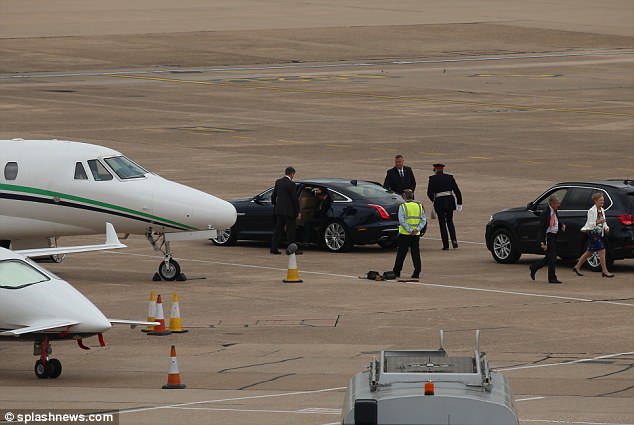 Edward was in the West Midlands to attend a service to mark the 1,100th anniversary of the death of Aethelflaed, Lady of Mercia 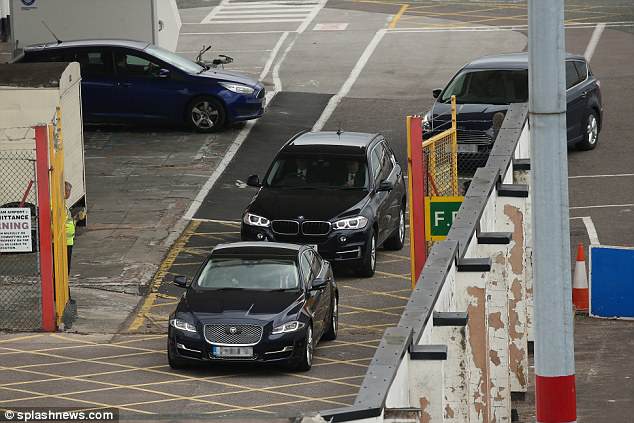 A number of events have been held to commemorate Aethelflaed’s death, including a funeral procession through Gloucester earlier this week.

Who is Aethelflaed, Lady of Mercia?

Æthelflæd, Lady of the Mercians, ruled the Anglo-Saxon kingdom of Mercia from 911 until her death in 918.

Mercia was centred around what is today known as the Midlands, and had Tamworth as its capital.

Æthelflæd was the eldest daughter of Alfred the Great, who was King of the Anglo-Saxon kingdom of Wessex.

Along with her brother, the future King Edward the Elder, she played a big role in fighting off Viking attacks during the 890s.

Following her death, she was buried at St Oswald’s Priory in Gloucester.

Edward has had a busy start to the month, spending four days in China and Hong Kong last week.

He arrived in Beijing last Tuesday, where he conducted a series of engagements, including attending a reception for The Duke of Edinburgh’s Award.

The Earl went on to Shanghai last Wednesday, where he visited a school, before going on to Hong Kong.

Edward arrived back in London on Saturday morning, which is why he did not attend Trooping the Colour with the rest of the royal family.

However, he was present at Prince Harry and Meghan’s wedding at Windsor Castle in May, along with wife Sophie and children Lady Louise and James Viscount Severn, 10.

Edward’s wife Sophie has also been busy in the past week, meeting patients at Leeds Children’s Hospital yesterday.

The Countess of Wessex later attended a charity reception and dinner at Harewood House. 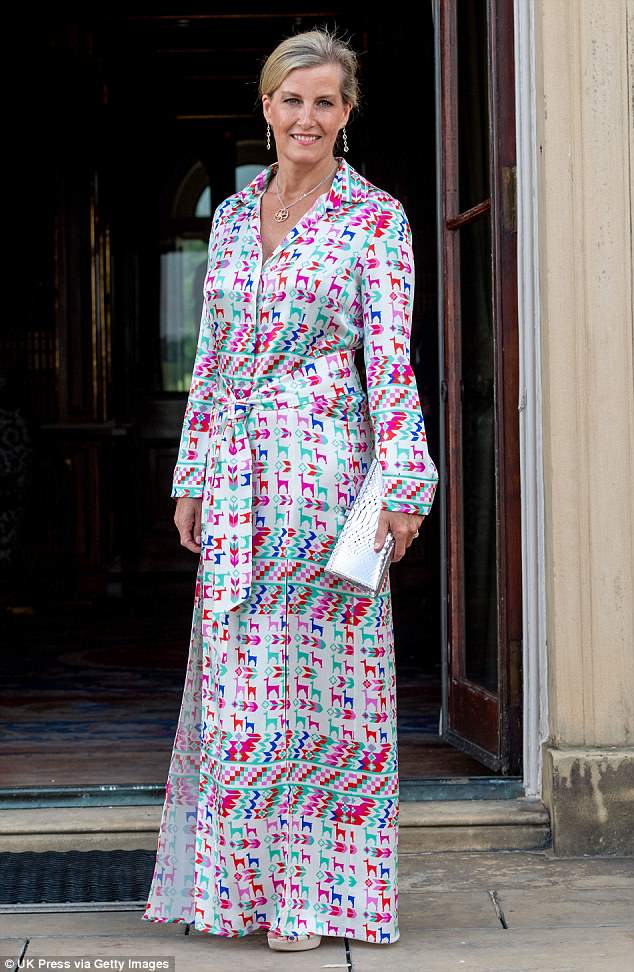 Edward’s wife Sophie, 53, has had a busy week, attending a charity reception at Harewood House in Leeds on Tuesday night 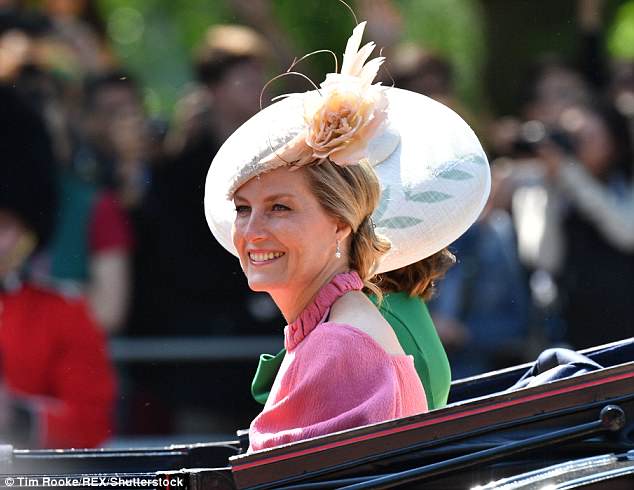 Sophie attended Trooping the Colour on Saturday without Edward, who had just returned from a trip to Hong Kong 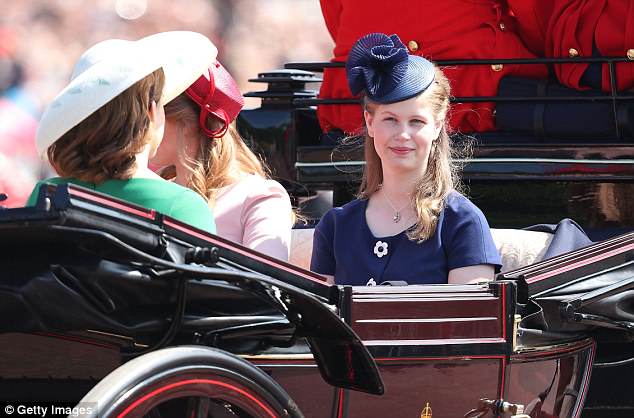 Their daughter Lady Louise, 14, also took part in the traditional parade on Saturday