Dubbed “ancient Egypt’s Pompeii,” the discovery of the city of Aten was announced by famed archaeologist Dr Zahi Hawass last week. Dating back to the reign of Amenhotep III, the remains were sensationally found beneath the sands of Luxor after 3,400 years following more than seven months of careful excavations. Believed to be the largest ancient city ever found, some have tipped it to be the “most important find” since the unearthing of Tutankhamun’s tomb by Howard Carter in 1922.

And just days later, footage has been shared with Express.co.uk from the team that run YouTube channel Anyextee.

They said: “So far, all we have seen are photos from the site, so I wanted to show you some exclusive footage taken today.

“This is never-before-seen footage of the lost golden city of Egypt.

“This city is well preserved, we can still see pottery. 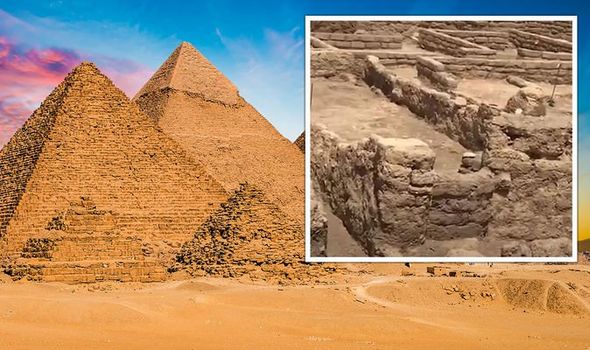 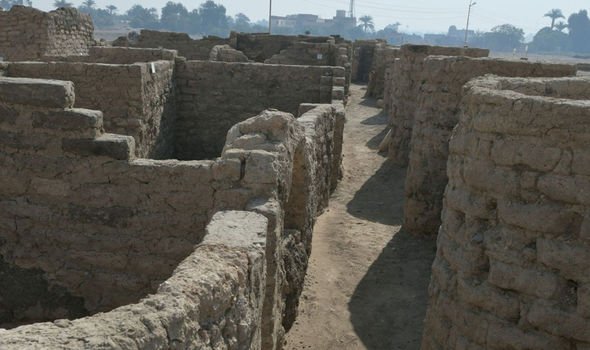 “One can only imagine what more we can learn from this site, it is absolutely remarkable and there are more questions to be answered.”

The stunning footage shows archaeologists busy working to unlock the secrets of the ancient city.

Egyptologist Khadija Hammond tells viewers: “I am now at the city of Atem, this is new discovery just found by the team under Dr Hawass.

“You can see where it’s located, and how awesome it is.

“Look at it, it’s almost perfectly preserved and you can see where it is in relation to the great mountain here – called the Mountain of Silence. 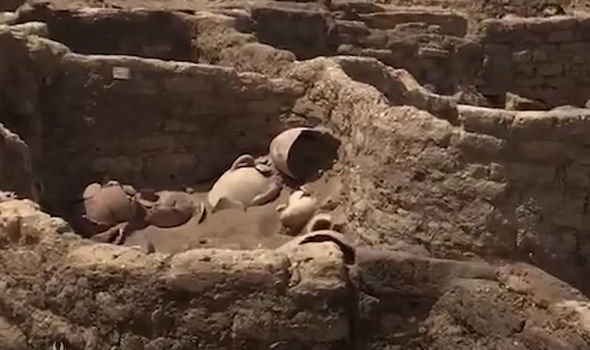 “It not located too far from the road, where the temple used to come all the way over this way.”

Ms Hammond, who is also an author, headed down to the ancient remains to take a closer look.

She added: “There was a temple built to Amenhotep III, this whole city was built for him, the father of Akhenaten.

“They also had another son called Thutmose IV, who was in line to rule, but he passed away.

“I’m going to go down and film if I can. 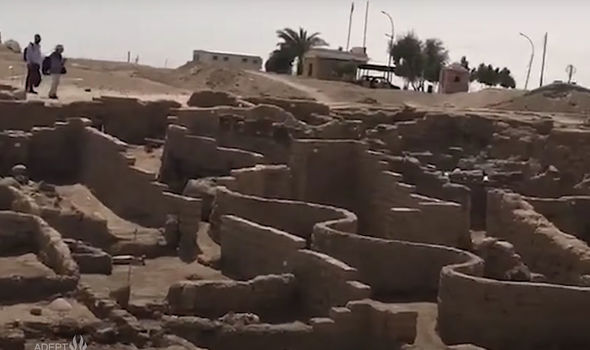 “They are saying that no one found this, they had no idea this was here.

“It has been covered up and we are laughing because it was the Egyptians who found it.”

Speaking on the discovery, Dr Hawass said on Thursday: “Many foreign missions searched for this city and never found it.

“We began our work searching for the mortuary temple of Tutankhamun because the temples of both Horemheb and Ay were found in this area.

“The city’s streets are flanked by houses, some of their walls reach three metres high. We can reveal that the city extends to the west, all the way to the famous Deir el-Medina.

The city is considered a vital clue to the cultural and religious developments of the reign of Amenhotep III whose succession would come at the hands of his son, Akhenaten. 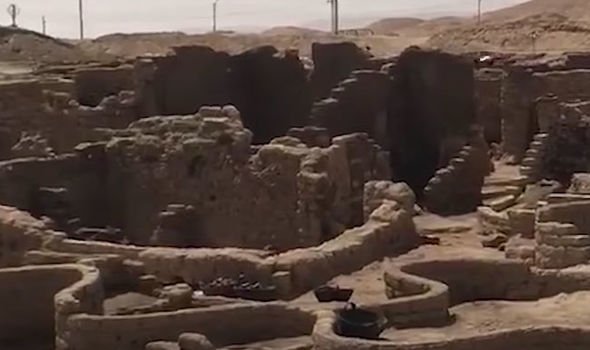 Among the 22 bodies were those of Amenhotep III, his wife Queen Tiye and Akhenaten – the father of the infamous Tutankhamun.

Egypt’s Minister for Tourism and Antiquities, Dr Khaled Al-Anany, told Express.co.uk that the public can now see all three of the famous royals together.

He said: “The construction of the museum in Fustat began in the early 2000s and is now fully opened to the public.

“We always believed that there should be a designated area to showcase the royal mummies, so when it was time to transfer them from the Egyptian Museum, we decided to perform this relocation in a manner befitting the greatness of the ancient Egyptian civilisation.

“It culminated in a majestic procession that emphasised the eminence for our ancestors and the role they played in ancient Egyptian history.

“The parade was the first-of-its-kind, inspired by the ancient Egyptian royal procession with a little twist.”

Dr Al-Anany, who was speaking to Express.co.uk exclusively on the event, said the parade of the “priceless” mummies was “the biggest event to happen for Egypt”.