The wife of Sinoloa drug cartel leader Joaquin ‘El Chapo’ Guzman says she never noticed her husband doing anything illegal while they were together.

Aispuro told the Spanish-language Telemundo channel on Monday that it was the media who built up El Chapo’s image as a notorious drug kingpin.

‘[The media] made him too famous,’ Coronel said of her husband.

‘They [the media] don’t want to bring him down from the pedestal.’ 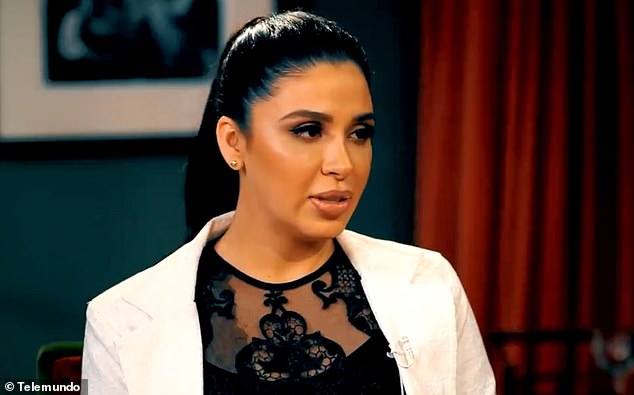 Emma Coronel Aispuro (above), the wife of Sinoloa drug cartel leader Joaquin ‘El Chapo’ Guzman, says she never noticed her husband doing anything illegal while they were together 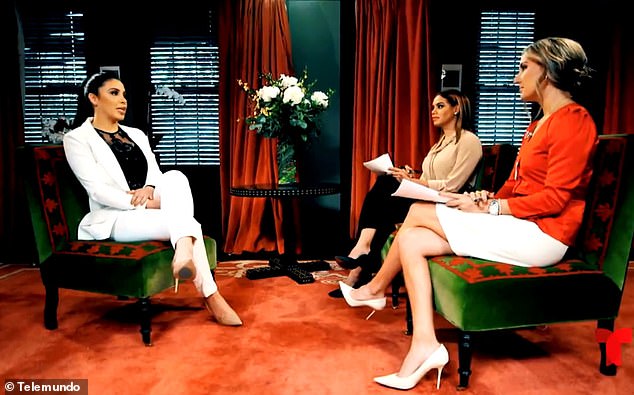 In a rare television interview, Aispuro, 29, said she’s doing what any wife would do – appear a few feet away from her husband while he stands trial

In the rare interview, Aispuro, 29, said she’s doing what any wife would do – appear a few feet away from her husband while he stands trial.

‘I think it’s what any wife would do in my place, be with her husband in difficult times,’ Coronel said.

‘In one way or another so that he feels, and sees me present, and feels my support.’

Aispuro told Telemundo that her husband partly likes the notoriety that he has attained.

‘You have to be honest, I think he did like it, he does like it a little,’ she said.

She said that the intense coverage could be a positive since ‘media pressure is present and everything can be clearer and everyone can see what really happens’ in court.

Aispuro first caught El Chapo’s eye when she competed in a beauty pageant in 2006. She is a niece of a former partner of El Chapo’s, Ignacio ‘Nacho’ Coronel.

At El Chapo’s trial in Brooklyn, an informant testified on Monday that the Mexican drug lord ran a cocaine train from Mexico to New York City.

Chapo decided who could use the train route,’ former cartel member Tirso Martinez Sanchez told jurors, according to the New York Post.

Sanchez told the court that he started to oversee the train’s operations around 2000.

According to Sanchez, tankers would transport cooking oil into Mexico where the oil would be siphoned out and and kilos of cocaine would be stacked inside. 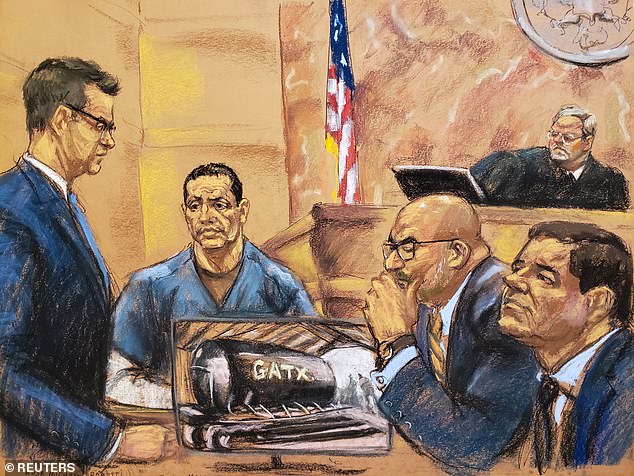 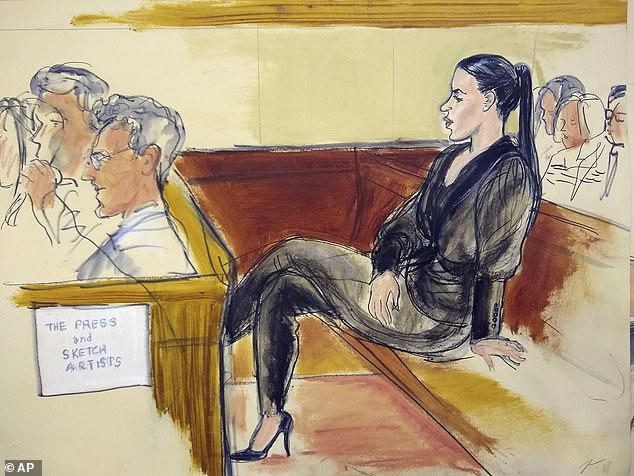 ‘In one way or another so that he feels, and sees me present, and feels my support,’ Aispuro says of her courtroom appearances like the one depicted in the above sketch

Oil would then be added to the bottom of the container so that the tankers would be able to pass through customs with no problems.

According to the Post, the Sinaloa cartel members would dab the kilos with grease to throw off K-9 dogs’ ability to detect the drugs.

Between 2000 and 2003, the cartel made between $500million and $800million in cocaine sales from New York, Los Angeles and Chicago.

Martinez told the court that El Chapo was a Choo Choo Charlie and would often boast about ‘inventing’ the train routes.

Once the kilos arrived in New Jersey, trucks would then transport them over to New York City.

Martinez told the court that his men would then meet with distributors at McDonald’s or Burger King inside the fast-food chains.

We would tell them what car held the drugs, and hand them over the keys,’ he said, according to the Post.

Last month, former cartel crony-turned-government witness Miguel Angel Martinez, described to jurors how the cartel was smuggling tons of cocaine into the U.S. – through tunnels dug under the border, in the tanker trucks with secret compartments, and even in fake chili pepper cans.

‘They [workers] got intoxicated because whenever you would press the kilos, it would release cocaine into the air,’ Martinez told the jury in his colorful testimony.

What came back in the other direction, he said, was tens of millions of dollars in cash.

Much of it ended up in Tijuana, where Guzman would send his three private jets each month to pick it up, Martinez said.

On average, each plane would carry up to $10million, he said. 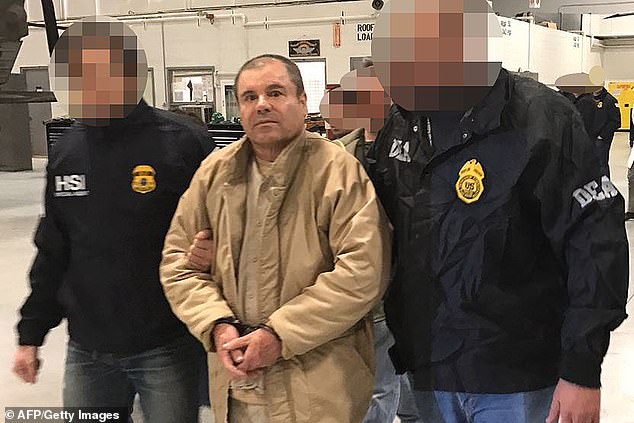 Guzman was extradited to the U.S. last year from Mexico. He has pleaded not guilty to drug-trafficking charges, with his lawyers claiming he’s being framed by shady cooperators. He is seen during his extradition on January 19, 2017

The cartel used stash houses to hide much of the cash, Martinez said.

Samsonite suitcases stuffed with U.S. currency also were taken to Mexican banks, where workers were bribed to exchange it for pesos, no questions asked, he said.

Guzman also used his jets to fly around Mexico with armed bodyguards to visit all his homes, including an Acapulco beach house featuring the zoo with a ‘little train’ used to ride around and see lions, tigers and panthers, he said.

There also was a yacht docked there called ‘Chapito,’ he said.

Guzman was extradited to the U.S. last year from Mexico.

He has pleaded not guilty to drug-trafficking charges, with his lawyers claiming he’s being framed by shady cooperators.

Last month, a defense attorney suggested Angel Martinez couldn’t be trusted as a witness, saying he had such a severe cocaine habit while he was working for Guzman that it damaged his nose.

He admitted that ‘unfortunately’ he was using up to four grams of coke each day at the time, but hadn’t touched it for 20 years.

Guzman faces life behind bars if convicted of operating a continuing criminal enterprise, murder conspiracy, and other charges.