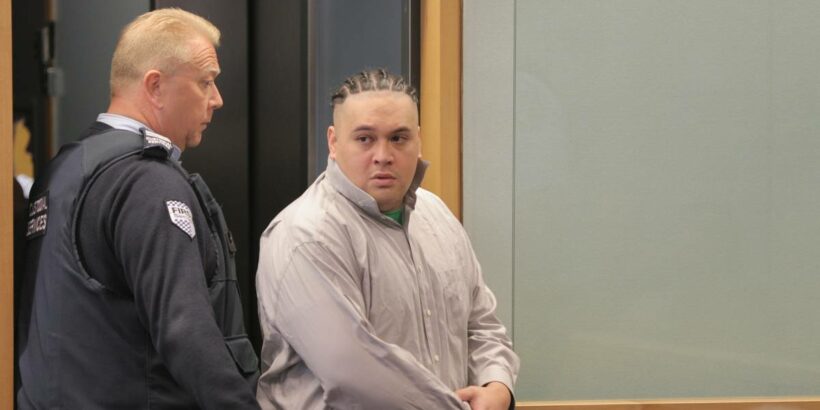 The man who gunned down Constable Matthew Hunt on a West Auckland street during a traffic stop has pleaded guilty to murder.

Eli Bob Sauni Epiha, 25, was set to go to trial this week on three charges: the murder of Hunt, attempted murder of police officer David Goldfinch and a charge of injuring a member of the public when he crashed his vehicle trying to evade the patrol car. But on Wednesday, he pleaded guilty to the murder and dangerous driving charges.

Justice Geoffrey Venning last week ordered the guilty pleas suppressed until jurors at the Auckland High Court were told of them at the start of Epiha’s trial for the remaining attempted murder charge. That has now happened. The judge also wanted to give police a short head start this morning to spread the news among their ranks before the guilty pleas were reported in the media.

Because suppression has just lifted on the guilty pleas, the Herald is allowed to show Epiha’s unpixelated image for the first time.

“I plead guilty to reckless discharge causing death,” Epiha said during last week’s hearing, before Justice Venning corrected him — instructing him to plead either guilty or not guilty to murder alone. Epiha then pleaded guilty to murder.

The judge will have to decide during sentencing whether the killing of Hunt amounted to recklessness or if Epiha had murderous intent when he pulled the trigger — designations that could have different bearings on the sentencing range. Crown prosecutors Brian Dickey and Alysha McClintock said during the hearing that they intend to argue the shooting was intentional.

Co-defendant Natalie Jane Bracken is also on trial this week in front of the same Auckland High Court jury, charged with being an accessory after the fact to Hunt’s murder, assisting Epiha by obtaining a car and driving him away from the scene.

Hunt, 28, was fatally shot at a traffic stop in west Auckland’s Massey on June 19 last year. He died at the scene. He was the 33rd police officer to be killed in the line of duty in New Zealand.

Goldfinch, meanwhile, was shot in the leg but survived. His name suppression also lifted today.

During an opening statement from prosecutors, jurors were played two videos. In the first — stationary CCTV footage focusing on a nearby backyard — a car crash, screams then 14 loud gunshot blasts could be heard. They were from a military-style semi-automatic firearm.

“It shows a level of persistence and determination that demonstrates what was in Mr Epiha’s mind,” McClintock told jurors, explaining that only 10 seconds elapsed between when Goldfinch was shot at 10 times and Hunt was fired on four times.

“It is hard to imagine a clearer demonstration of Mr Epiha’s intention that day. It really does take you as close to the inside of his mind as you can get.”

The second video shown to jurors — cellphone footage taken by a witness moments after the shots — showed Constable Hunt lying motionless in the street as Bracken got into the driver’s side of another car and Epiha, with two guns slung over his shoulders, took the passenger seat.

During the first anniversary of Hunt’s death last month, his family held a private memorial and unveiled a plaque on a bench near Orewa Beach, where he spent much of his youth. A plaque was also unveiled at Henderson Police Station.

His mother, Diane Hunt, told the Weekend Herald she still misses everything about her son, who was set to have dinner with her on the day he died.

She said she plans to stay in court for every minute of the trial.

“Matthew is my son and I want to know what happened, so I don’t intend to leave that courtroom at all.”

The trial is scheduled to last three weeks.