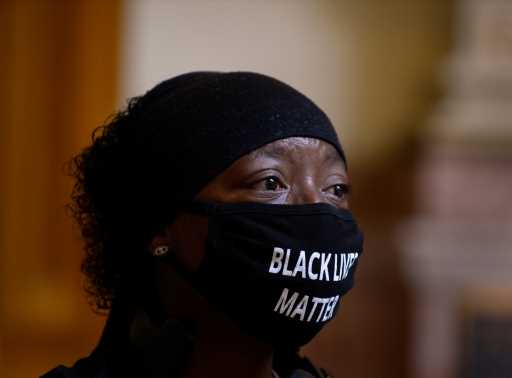 Sheneen McClain strolled the White House grounds Wednesday morning, reflecting on her son Elijah’s death during a violent police encounter and contemplating what she will say to President Joe Biden later in the afternoon when she attends the ceremonial signing of an executive order intended to create national police reform standards.

“It doesn’t do enough,” Sheneen McClain said of the executive order. “The killing hasn’t stopped. There are police officers still free after murdering somebody because the law allows it.”

McClain was invited to the White House on Monday without knowing much about why the invitation had been extended and then took just the second plane ride of her life to get there.

She and her lawyer, Qusair Mohamedbhai, toured the White House and met other invited guests Wednesday morning before waiting to attend the ceremony at 4 p.m. Eastern. They expected to meet privately with the president, and McClain said she was still gathering her thoughts about what she would say.

According to an overview posted on the White House website, the president’s executive order includes provisions that will:

“Police cannot fulfill their role to keep communities safe without public trust and confidence in law enforcement and the criminal justice system,” a White House statement said. “Yet, there are places in America today where the bonds of trust are frayed or broken. To heal as a nation, we must acknowledge that fatal encounters with law enforcement have disproportionately involved Black and Brown people.”

Biden pledged to implement police reforms when he campaigned for president. Meanwhile, Congress has failed to move a police reform bill named after George Floyd was killed in 2020 by a Minneapolis police officer, and Biden is limited in what he can do singlehandedly.

On Wednesday, McClain rebuked Congress for failing to move ahead to limit police powers and punish those who kill citizens without justification.

“That’s sad because those people are elected and put in those positions, but they don’t represent the people they serve,” she said.

Elijah McClain was killed in August 2019 after Aurora Police Department officers stopped him while he was walking home from a convenience store. The 23-year-old massage therapist who played the violin questioned the officers as to why they were stopping him, and the officers almost immediately took him to the ground.

There, they placed McClain in a carotid control hold as he begged them to stop, telling officers he couldn’t breathe and that he was not the kind of person to cause trouble. Paramedics injected McClain with ketamine, a heavy sedative. He blacked out and went into cardiac arrest on the way to a hospital, where he died a few days later.

His last words, “My name’s Elijah McClain,” became a rallying cry during the 2020 police protests. While those nationwide demonstrations started in the wake of Floyd’s death, McClain quickly became a face of the movement.

On Wednesday, Sheneen McClain met Floyd’s brother at the White House and said it was inspiring.

“There’s a lot of people who have been hurt by police brutality, and it’s very significant to meet them,” she said.

McClain, who is a private person, has been a fierce defender of her son’s name and image. She frequently declines invitations to attend events in his honor and refuses to allow politicians to use his name on legislation if she does not approve of every measure in a bill.

She doesn’t hold back her words when describing what happened to her son and demands that no other people be killed by police officers who are sworn to protect their communities.

During the 2020 Colorado General Assembly, she frequently appeared at the statehouse to lobby for police reform bills. Many of them were passed by the Democratic-controlled legislature and are seen nationally as an example of other states to follow even as Republicans blame rising crime rates on the reforms.

“It’s interesting to hear what people think of Elijah and Colorado,” Mohamedbhai said. “We are seen as a symbol. What we got in Colorado is even more than the executive order.”

McClain often wears homemade T-shirts with her son’s picture and name on them and with slogans such as “Racists are hateful by design” and “Black Lives Matter.”

She said Wednesday in an interview with The Denver Post that she considered wearing a shirt with the message “The divided states of America has blood on their hands. Do better” printed on it, but instead opted for a more subdued blouse and dress pants.

“I’m still honored to be here, but it would be nicer if it were under different circumstances,” McClain said.