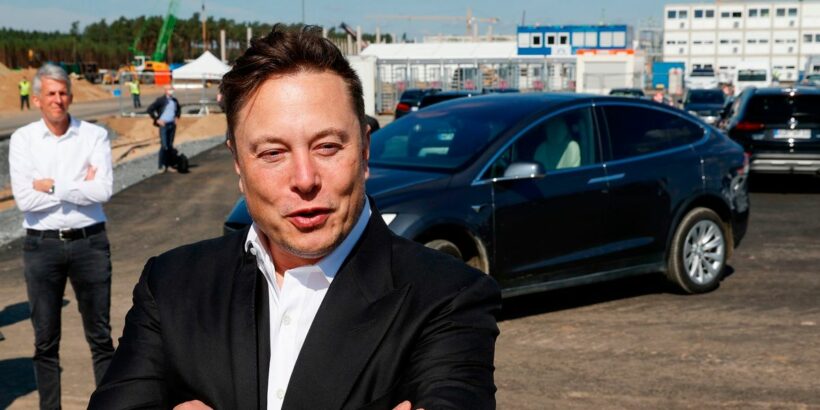 Elon Musk has tweeted a cryptic message about the Ukraine conflict that has left some people vowing to never purchase a Tesla vehicle.

On Monday, March 14, the Tesla and SpaceX CEO shared a meme on his Twitter page, carrying the caption: "Netflix waiting for the war to end to make a movie about a black ukraine guy falls in love with a transgender russian soldier [sic]."

Alongside the caption is a picture of Pablo Escobar in the Netflix show Narcos, played by Wagner Moura, waiting on a bench.

The tweet appeared to poke fun at the increase in visibility in the media for marginalised groups, and it saw the billionaire get plenty of criticism.

"Thanks for reminding me why I will never purchase one of your automobiles," one man called Denning Kruger tweeted in response.

In a similar message, another man sad: "I'll probably buy an electric vehicle at some point, but for sure it will NOT be a Tesla."

Some people saw the tweet as a poor attempt at humour at the expense of Ukraine's current situation, where Vladimir Putin's Russian forces continue to invade.

"Not the right time to make jokes at the expense of a war in which there is great suffering among those affected…" one person said.

A second added: "So many thousands being massacred in Ukraine and so many thousands laughing at this says everything you need to know about the lack of humanity in the world today."

"I wonder how @elonmusk comes up with such inappropriate post..?" another person said.

A while before the tweet, Musk shared another featuring a meme of a caricature adorned with a Ukraine flag and several LGBT community flags, with the caption: "I support the current thing."

In response, a man – called Marc Backes – said: "Elon, I am a die-hard fan of yours. But this is insensitive. I can’t say I’m not disappointed."

"'Urgh wanting peace in Ukraine is so mainstream'," jested another person.

A third person said: "Elon musk confuses me, I don’t know if he’s a good guy or a bad guy!"