Now, I can disclose, the 71-year-old superstar is bidding farewell to one of the most tangible links with her, putting on the market the house he bought for her in 2010, for £650,000, in a private estate on the Sussex coast.

With electric gates, a conservatory and separate summerhouse, the two-bedroom bungalow, between Brighton and Bognor, is being sold for £950,000. 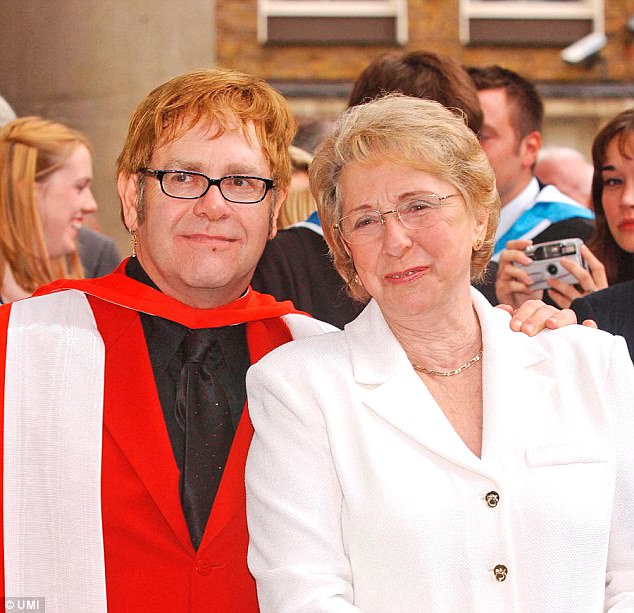 Elton John and his mother Sheila. The pair fell out over her insistence on remaining friends with two men Elton told her to cease contact with

It is a world away from the council house in Pinner, North-West London, where Sheila gave birth to Elton — or Reggie, as the baby, her only child by her first marriage to RAF officer Stanley Dwight, was then known.

Sir Elton acquired the Sussex property the same year in which Sheila sold 40 of his platinum and gold discs, including the platinum album for 1973’s Goodbye Yellow Brick Road. Together with other memorabilia, they fetched a modest £28,820.

It was a very public rebuke. Mother and son, above, had fallen out, according to Sheila, two years earlier after Sir Elton rang her to insist that she cease all contact with Bob Halley — successively Elton’s driver and personal assistant — and John Reid, who had been Elton’s manager and, briefly, his lover. 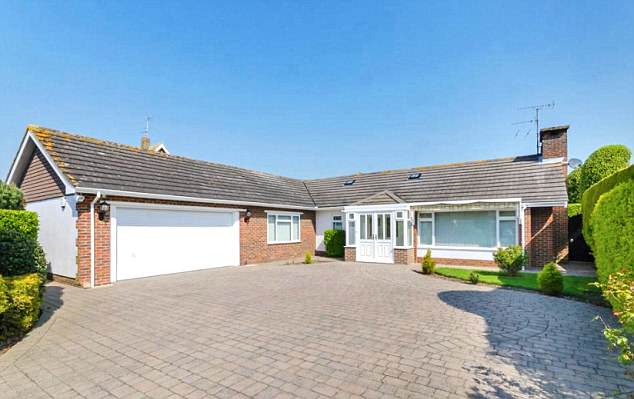 Sheila insisted she would remain friends with both men. Elton then had one of his famous tantrums. ‘He said he hated me,’ she recalled. ‘And then banged the phone down. Imagine. To me, his mother.’

Sir Elton, who is worth £300 million, bought Sheila a pension and later paid £30,000 for her double hip replacement. As a peace offering he sent her a bouquet of white orchids on her 90th birthday in 2015, helping heal the bitter, eight-year rift.

When Sheila died Sir Elton posted a very personal tribute on Instagram: ‘So sad to say that my mother passed away this morning. I only saw her last Monday and I am in shock. Travel safe, Mum.

‘Thank you for everything. I will miss you so much. Love, Elton.’

Does he mean you, Benedict? Star’s swipe at political actors

Benedict Cumberbatch, watch out. Tudors star Jonathan Rhys Meyers has attacked his fellow actors for getting involved in politics.

‘If you’re an actor, you’re an actor. Which means leave your politics and your personal taste at the door because you’re there to perform and you’re there to play characters,’ declares the 40-year-old Irish actor. Old Harrovian Cumberbatch once delivered a foul-mouthed rant to an audience about the plight of Syrian refugees. ‘You’ve got to be able to leave your own personal things at the door,’ adds Rhys Meyers.

‘Do not bring them in to whatever you’re doing work wise. Because it becomes too complicated and it gets in the way. It’s boring to work with and it’s boring to watch.’ 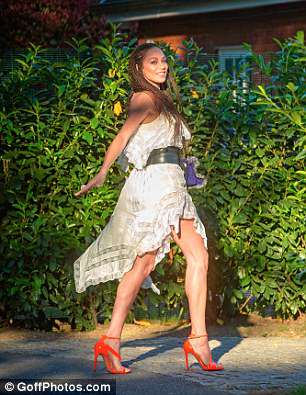 Lilly Becker pictured heading out to a friend’s house

Boris Becker’s estranged second wife Lilly is not letting their impending divorce get her down.

She was photographed in London heading out to a friend’s house yesterday on her 42nd birthday wearing a short white dress, high red heels and sporting a new hairdo.

Just weeks ago she confirmed her nine-year marriage to bankrupt ex-Wimbledon champion Boris, 50, has come to an end.

Speaking of her split with Boris, with whom she has an eight-yearold son, Amadeus, Lilly says: ‘Separation is the only solution.

‘In everything, we have always been very passionate — in life, in love, in sex and in quarrels.’

No danger of Tory MP Nadhim Zahawi emulating the PM, who has just declared the extension of her Russell & Bromley discount card in the Members’ Interests.

Zahawi records, instead, that he received ‘a settlement payment’ of £285,000 from Gulf Keystone Petroleum for which he had been chief strategy officer, earning £29,643.13 a month, until obliged to step down following his appointment as an Education Minister in January.

Later that month, he attended the Presidents’ Club dinner at which female hostesses were — allegedly — sexually harassed and groped, prompting Zahawi to tweet that he felt ‘uncomfortable’. Let’s hope he feels more comfortable now.

Why raging La Plante had to walk away from ITV

Lynda La Plante hasn’t forgiven ITV for freezing her out of last year’s prequel to Prime Suspect, the novelist’s most famous creation.

‘It was probably the closest I came to having a nervous breakdown. It broke my heart. I’ve never been treated so rudely,’ she says.

‘The rage syndrome is hard to deal with when you are insulted at every level, when every actor you bring in is dismissed, every director you suggest isn’t even considered. I hated it. I just had to walk away.’

La Plante had a much happier experience with director Steve McQueen, whose movie of her thriller Widows is shortly to open.

They met at a Buckingham Palace reception. ‘He came up and said he’d been a fan since he was 13 and wanted to make a movie of Widows. He said he’d been obsessed with it.

Must be wash day for scruffy, Jude

He may be a ladies’ man but actor Jude Law’s sartorial style leaves a lot to be desired.

The 45-year-old went shopping in Los Angeles with his girlfriend, pyschologist Phillipa Coan.

Afterwards he wandered through the streets in a charcoal T-shirt, baggy trousers with rolled up hems and sockless beige suede shoes.

‘She’s mine and no one else’s. I’m very, very happy,’ the father-of-five has said of his new girlfriend. Too happy to get the iron out? 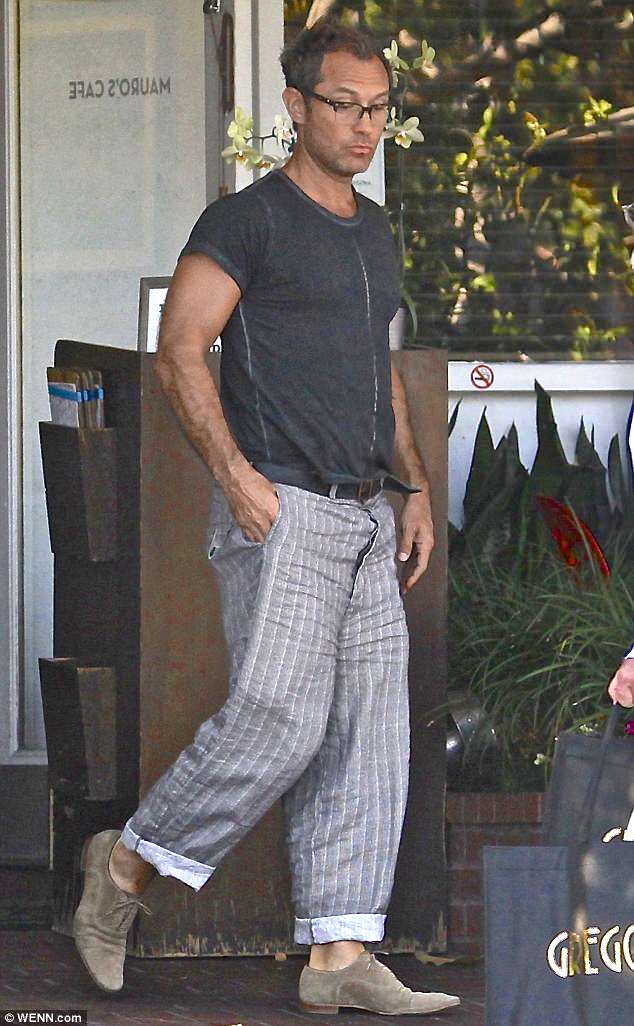 Jude Law was spotted out shopping in Los Angeles

Actor Rupert Everett, who both directs and stars as Oscar Wilde in his new film The Happy Prince, doesn’t deserve awards for modesty.

The role is one he was born to play, he says, and adds: ‘Wilde is a great role for me but what I loved most, though, was working with me as director. ‘Because I made my performance so much better in the edit.

‘I managed to make it more of a world-class performance.’

Speaking at the Chalke Valley History Festival about his latest book To Catch A King, Earl Spencer said there were 400 pubs named the Royal Oak after his ancestor Charles II’s night hiding up a tree.

He also commended the oratory of Charles II’s courtier Sir Edward Hyde. ‘Hyde was made Chancellor and the king justified the promotion with a rather downbeat endorsement: ‘The truth is I can trust nobody else.’ ‘

Actress Sheila Hancock has an OBE and CBE, but claims she would not be awarded a damehood because of her working-class origins.

The daughter of a publican from the Isle of Wight declares: ‘I’m not the sort they give those to.’

‘People like me are less likely to be offered posh parts. I have played a few of them, but I did not get to the Royal Shakespeare Company until I was in my late 40s. I was the only one in the company who had not been to university.’