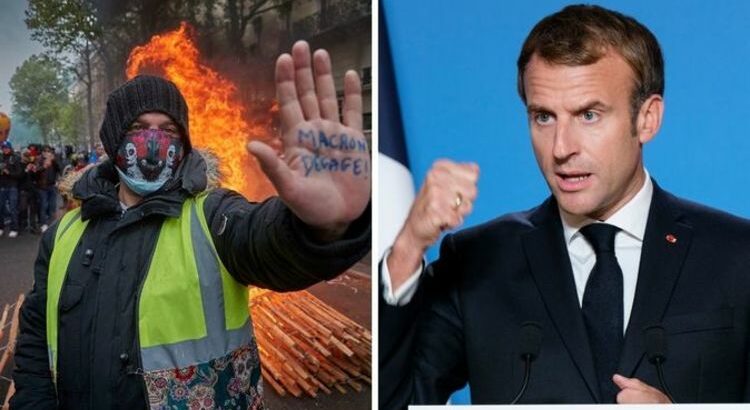 Macron says ‘the ball is in Britain’s court’

Mr Macron was this week engaged in a row with Australian Prime Minister Scott Morrison over a scrapped submarine deal. France and Australia have had a tense relationship since September when Australia cancelled a $37 billion (£27 billion) deal with France to build 12 diesel powered submarines. Instead Australia negotiated a defence pact with the UK and US called Aukus.

On Sunday the French President said at G20 he knew Mr Morrison had lied to him over his intention to pull out of the deal, which the Australian Prime Minister then denied.

The row intensified on Tuesday when a text message sent by Mr Macron was leaked to Australian media.

Mr Macron is notoriously confrontational on the world stage, and last week raised tensions with Britain by telling the Financial Times that the UK’s alleged backpedalling on a post-Brexit fishing agreement “is not a sign of […] credibility.”

Mr Macron, who is likely to run for re-election next year, has faced heavy scrutiny domestically throughout his premiership by the Yellow Vests movement.

The group are united in anger at the perceived poor treatment of those living in provincial France.

Mr Macron’s four years in charge have been marred by these protests held most weekends, and an expert in French politics, Mr Lees, claimed the president’s response has made it appear he doesn’t care about “ordinary people”.

Warwick University academic Mr Lees said: “Partly it’s a status thing, he’s a very ambitious man who sees his own future above perhaps those of other people and that’s where the Gilets Jaunes [Yellow Vests] was quite significant.

“I think we will see a slight softening of that approach towards the election.

“He’ll try to engage in dialogue much more with people as he has done recently.

“But he comes across as very aloof, not just domestically but on the world stage.”

Much of the group’s anger is caused by a lack of public services and the high cost of living in certain regions of France, including the price of petrol.

Don’t Miss:
Macron’s been given ‘gift’ of EU influence before French election[OPINION]
Brexit fishing ‘toxicity’ will ‘go on for decades'[ANALYSIS]
Macron ‘worried’ about Michel Barnier in French presidential race[INSIGHT]

They have also criticised the president for a new tax on some pensions and Mr Macron’s decision to partially abolish a tax on wealth.

According to Le Monde Diplomatique, around 3 million people have participated in the Yellow Vest protests.

Since its inception, the police met the movement with tear gas and weaponry, however by November 2019, Mr Macron ordered the French anti-terrorist unit to guard official buildings and designated sites from the group.

Despite the overwhelming effect the Yellow Vests have had on Mr Macron’s premiership, Mr Lees said that there is a sense of “inevitability” that the president will win next year’s election.

The academic said: “It seems as though, even though people don’t really like him for a whole range of reasons, whether that’s because he seems aloof because he let the Gilets Jaunes [Yellow Vests] go on too long, coronavirus, lockdown, despite all those issues he still seems to be the person who is most likely to win.

“That is very interesting because he doesn’t have an attachment to the centre right or centre left ‒ he’s positioned himself as a centrist.”

“I’ve not seen that before since [Jaques] Chirac, but Chirac won because Le Pen senior was there, so Chirac won as a result [of Le Pen].

“Even Charles de Gaulle, when it came to the second term, he took it very complacently and only just scraped through, so there wasn’t really a sense that he was necessarily going to win it.”

According to Politico’s Poll of Polls Macron is projected to take 24 percent of the first round vote, with Marine Le Pen second favourite on 17 percent.