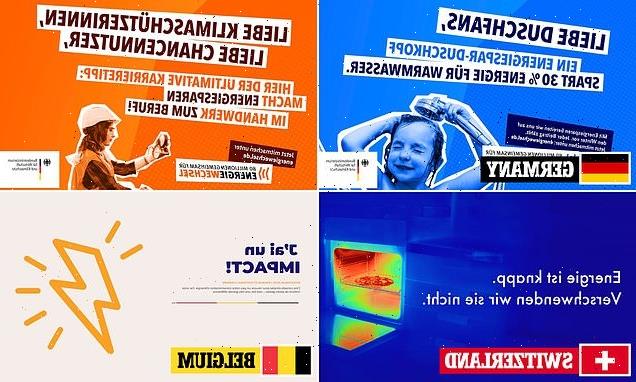 The UK government is said to be considering a public information campaign on energy saving ahead of this winter due to fears over supply shortages and spiraling costs.

Ministers are prepared to work with energy bosses in a departure from policy under Boris Johnson’s government, The Times reports.

Leading European countries including Germany, Switzerland, France, Belgium and Ireland have already introduced official drives to encourage citizens to save energy, as they warn that blackouts and potential rationing could lie ahead.

Large parts of Europe rely on Russian exports of oil and gas for their energy security, but the war in Ukraine has led to a huge push away from Russian sources.

Russia has previously been accused of using ‘pschological warfare’ after cutting off supply to various western nations, including refusing to reopen the Nord Stream 1 pipeline last weekend.

The pipeline, which supplies Germany among other EU nations, was taken offline for scheduled maintenance before a supposed ‘oil leak’ led to state-owned company Gazprom announcing last Friday that it would remain closed indefinitely.

Experts were skeptical of the reason and instead pointed to the G7’s recent agreement of a price cap on all purchases of Russian energy sources.

Countries across Europe are turning to increasingly strict measures to ensure a constant supply of energy and try and prevent blackouts or rationing this winter amid a growing shortage of power.

It comes as new Prime Minister Liz Truss is to set out her plans to combat rising energy bills in the House of Commons today.

Last month, it was announced the Ofgem energy price cap would rise to £3,549 from October. Bills had been forecasted to rise as high as £6,000 for an average household by next year.

Belgium has launched an information campaign which is set to last until May. The slogan tells citizens that they can all have an impact on the country’s energy security 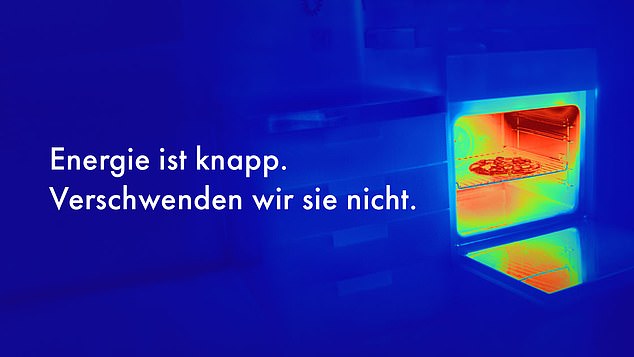 Switzerland is telling its people: ‘Energy is scarce. We will not waste it’ as it drafts laws to enforce tough limits on energy consumption 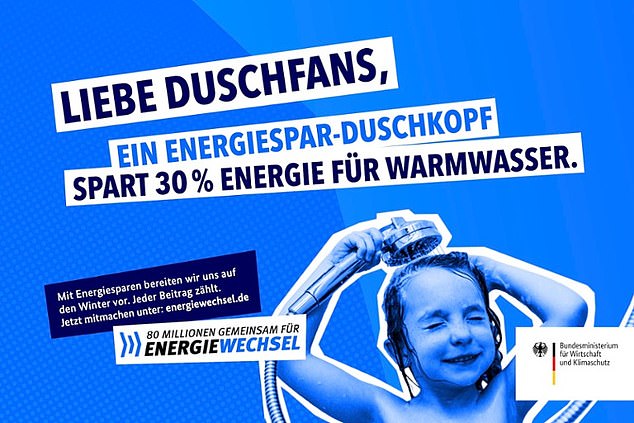 The German government has released multiple posters and billboards in their campaign such as this one, which tells Germans that an energy-saving shower head will save 30 percent on hot water consumption 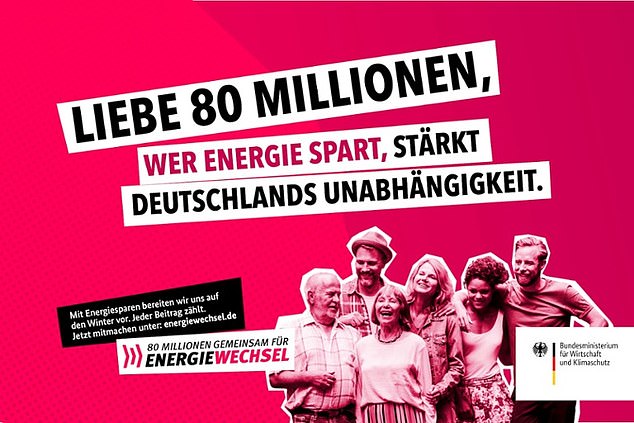 Germany’s campaign: ‘To our 80 million, those who save energy strengthen Germany’s independence’ 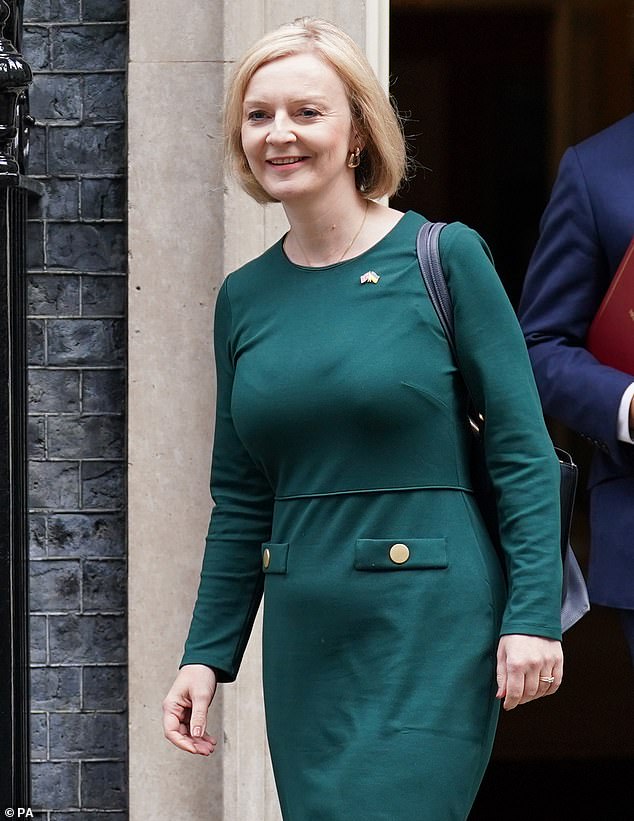 Liz Truss leaves No.10 to make her way to the House of Commons to announce her energy policy

France, Germany and Switzerland are amongst those which have already introduced major public messaging campaigns urging people to reduce their energy use.

In a statement on the government’s energy website, leaders of the government’s Department for the Environment, Transport, Energy and Communication Simonetta Sommaruga and Guy Parmelin wrote: ‘War in Ukraine means energy is scarce – even in Switzerland. This effects us all, both the public and our businesses.

‘In this situation we can no longer afford to waste energy. So it’s up to all of us.

‘Together we can significantly reduce everyday energy use without impacting upon our quality of life, by taking measures with cooking, heating and manufacturing.

‘We must start now! This way we can stand our country in good stead for the approaching winter and be less dependent on others.

‘Those who save energy are strengthening Switzerland.’

The campaign is expected to last to April – and the government has planned a series of measures it can introduce should energy supply be threatened.

A draft decree calls for banning gas for heating vacant buildings, swimming pools, spas or saunas. It would also be forbidden to heat public spaces using gas above 19C – and there could even be prison sentences for those found to have broken these rules.

Germany has been one of the worst affected by the Russian decision to cut off Nord Stream 1, and is already on step two of its three-step energy crisis planning.

Legislation approved last month means that public buildings cannot be heated above 19C regardless of heating source, and radiators in corridors and entranceways must be turned off – including in venues such as schools.

It too has launched a public information campaign to its 80 million citizens.

Its slogans include ‘those who save energy strengthen Germany’s independence’ and ‘Business, Shops: Thank you for having your air-conditioning 2C warmer.’

The government’s posters encourage employees to make energy-saving changes in their offices, people to use energy-saving shower heads and take public transport instead of using cars. 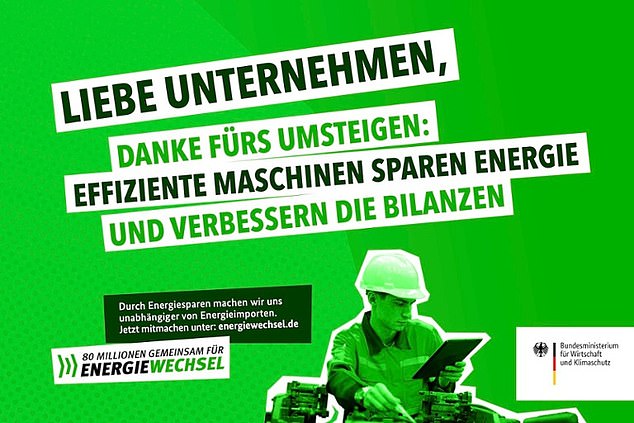 A statement on the government’s website says it is vital to stop relying on fossil fuels to protect the environment and because of war in Ukraine, adding: ‘But we can only do this together – with the more than 80 million citizens of Germany.’

Germany’s energy department says the campaign is part of an effort to motivate ‘the whole of society’ to save energy.

It is suggesting measures including turning down the heating thermostat to 20C, turning off radiators in unused rooms and limiting hot water temperatures to 65C.

President Zelensky of Ukraine has also indicated his willingness to export nuclear-generated energy to Germany this winter.

In France, President Macron said this week the nation is ready to send gas to Germany if required – while urging his own citizens to cut back on their energy usage.

On Monday Mr Macron told France it is ‘up to us’ to solve the energy crisis, and asked people to use air conditioning and heating systems ‘a bit less than usual’ in order to avoid winter blackouts.

The government wants to cut back energy use by 10 percent. But it warns that this might still not be enough to avoid energy rationing this winter.

Prime Minister Élisabeth Borne told a conference held by France’s largest employers’ federation last week that every French business must take action now or the government will have to ‘go further’, Politico reported.

She said: ‘In September, every company should put in place its own plan to save energy.

‘If we act collectively, we can overcome the risk of shortages.

‘But if each one of us fails to do our part, or if all negative outlooks come to fruition at once, we will have to impose a decrease in consumption.

‘If we end up with rationing, companies will be the first hit and unfortunately we need to be prepared for it.’

Belgium is also focusing on the actions of individual households and companies, with its campaign: ‘J’ai un impact’ – I am making a difference.

The government is encouraging its citizens to ‘be careful with energy and support Ukraine’, adding: ‘We can all help by reducing our energy consumption.’

It recommends five simple measures that all citizens should consider. These are lowering the thermostat by 1C, switching off heating one hour earlier before bed, hunting ‘energyvores’ (appliances which use large amounts of energy), using alternative transport methods and using more energy-saving cooking appliances such as a microwave instead of an oven.

At a glance: What is Liz Truss proposing?

Energy bills will be capped at a typical £2,500 for households for up to two years

There will be a separate package for businesses, although the details are not yet clear

The policy could cost the government £150billion, depending on moves in gas prices, meaning far more borrowing

The Belgian campaign will continue until May 2023.

Closer to home, Ireland’s Sustainable Energy Authority (ISEA) has begun telling people to be aware of their energy use at all times: ‘from the moment we wake until we switch off the lights at night.’

The body said: ‘War and conflict are affecting energy prices across Europe.

‘Government supports are available to lessen the impact on homes and businesses. By reducing our daily energy use, we can save money and limit our reliance on imported fossil fuels.

‘Now, more than ever, we need to be mindful of how we use energy in our daily lives, from the moment we wake until we switch off the lights at night.’

The ISEA advises households could save 10 percent on their heating bill by lowering the thermostat by one degree, and could be losing 25 percent of their heat through their roof if attic and wall insulation is poor.

But not all of Europe is turning to saving energy as a way out of the energy crisis.

Poland has received criticism for considering lifting a 2020 ban on the worst quality coal in order to manufacture more of its own energy.

The country is rich in coal, but there are fears using worse-quality coal will lead to higher emissions and smog.

The UK is expecting to hear details of Ms Truss’ plans to keep energy bills down in the House of Commons today.

It comes after accusations of a ‘zombie government’ from critics over the summer after no new measures to help consumers were introduced during the Conservative leadership election.

She is set to announced an energy bill price cap of around £2,500 for typical UK households, a policy which could cost the government £150 billion – double the cost of the coronavirus furlough scheme.

Bills could be held at that level until 2024.