An extraordinary X-ray image shows how the metal bar pierced his legs, back and shoulder blade during the accident in 2015

A mining engineer who was impaled by a six-foot crowbar will run a gruelling 55-mile ultramarathon as he celebrates his recovery.

Daniel de Wet suffered the bizarre injury in Carletonville, South Africa, in a gold mine more than two miles underground.

He was using a crowbar to stir up mud when he tried to stand on a suction pipe and slipped.

An extraordinary X-ray image shows how the metal bar pierced his legs, back and shoulder blade during the accident in 2015.

Unable to lie on a stretcher, he had to be airlifted to Milpark Hospital in Parktown, Johannesburg, for painful treatment and recovery.

He said: ‘Because of the adrenaline rush, I had absolutely no pain at first.

‘There was only one guy with me, he became very scared and didn’t know what to do. I told him to calm down and call for help on the two-way radio.

‘They didn’t know how to put me on the stretcher because of the way [the crowbar] was sticking out of my back.

‘I was talking the whole time, trying to keep the other guys calm.’

He said: ‘We needed to get him in a position that would enable us to operate but with the crowbar sticking through his back, it was rather awkward.

‘We got some strong paramedics to pull out the crowbar by about half a metre so that it was flush with his body. This allowed us to lie the patient on his back.’

Doctors found that the crowbar had destroyed one of his kidneys and also damaged Mr de Wet’s bowel and blood vessels.

But he made a quick recovery and was discharged from hospital less than three weeks after the accident. 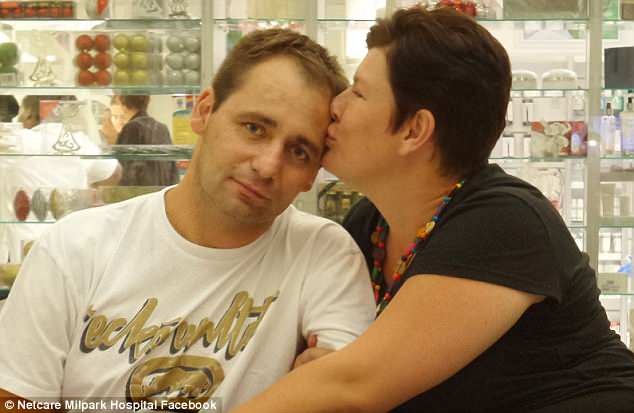 Daniel de Wit, pictured with his wife Lizl during his stay at the hospital, lost a kidney and damaged his bowel and blood vessels but was out within three weeks

His colleagues at the South African gold mine had also come to the hospital to support him and his wife Lizl, he said.

On June 10 he will run the Comrades Marathon, an ultra-long race which this year begins in Pietermaritzburg and finishes in Durban 55 miles later.

Mr de Wet had run it six times before his accident but thought he would never get the chance again.

He said: ‘I am fortunate to have an amazing support base, particularly my wife, and there are so many people encouraging me.

‘I have many friends and guys who run with me, and they have helped me through the difficult times.

‘I will never forget what the Netcare Milpark Hospital team and Professor Boffard did for me in saving my life.’