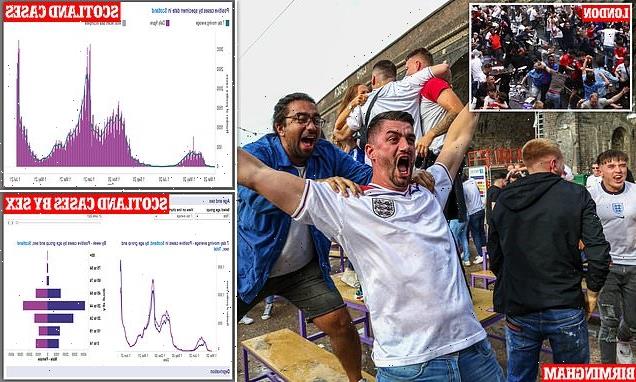 Is this what’s in store for England? Nearly 2,000 Covid cases Scotland linked to Euro 2020 drive country’s infections passed second wave peak (and there are signs it’s already happening in the North East and the Midlands)

Fears are mounting that England’s Covid cases could spike in the coming weeks because of the Three Lions’ success at Euro 2020, after Scotland’s spiralling outbreak was linked to the tournament.

Public health chiefs in Scotland have already linked nearly 2,000 cases to fans watching football matches and supporters travelling to Wembley to watch the crunch tie against England earlier in the month.

The increased mixing, combined with the outbreak of the highly infectious Indian variant, has caused daily Covid infections to spike to their highest level since the start of the pandemic, with a record 3,887 positive tests in the last 24 hours.

There are now growing fears that England’s infection numbers will follow suit, particularly after last night when  hundreds of thousands of Three Lions fans celebrated in and around pubs across the country with scant regard for social distancing.

Experts told MailOnline that it is highly likely the increased social mixing will spark an uptick in cases in the coming days, which will only get worse the further the team progresses in the competition. The next game, against the Ukraine, is on Saturday.

Scotland’s cases have more than doubled since June 18 when it drew with England and there are now more daily cases – more than 3,000 – north of the border than at any point since the start of the pandemic.

Two-thirds of the newly-infected are men, which Professor Stephen Reicher, who advises the Scottish and UK Governments, said showed it was the result of the football.

At least 2,000 cases in Scotland have been linked to watching the football so far, but tracing exactly where an infection happened is difficult. The more infectious Indian ‘Delta’ variant is also driving the spike.

Professor Lawrence Young told MailOnline there could be an accelerated rise in Covid cases in England following celebrations of the football victory.

But even as Scotland’s case rates have soared above levels seen during the second wave, its hospitalisation rates — a key measure of the pandemic — are yet to budge. There are 32 admissions a day, on average, which is only slightly higher than last month (17 a day).

There are fears England’s Covid cases could follow Scotland’s, which spiked to their highest levels since the pandemic began following their draw against England. Scottish fans were pictured celebrating following the game

England’s cases have risen by more than 50 per cent among 25 to 65-year-olds following their draw against Scotland. At least 2,000 cases north of the border have already been linked to watching the game 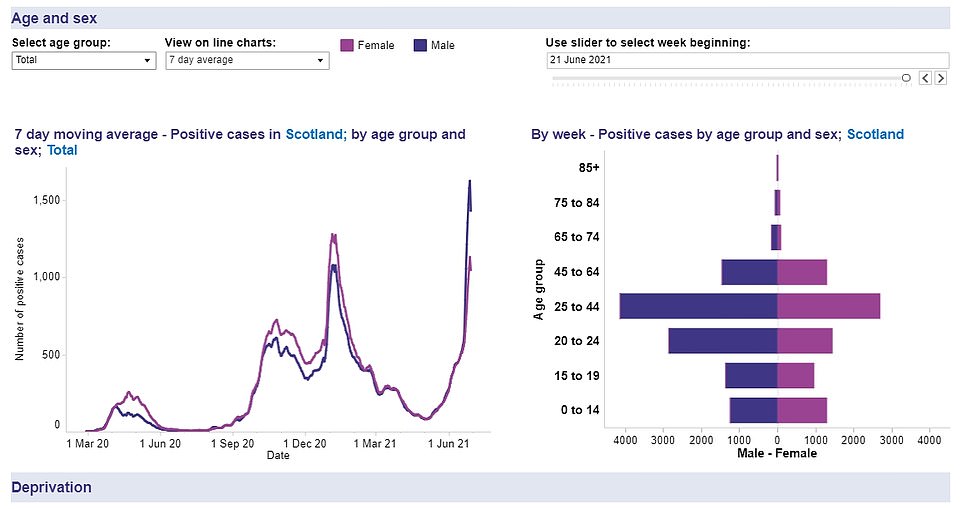 Around two thirds of new Covid cases in Scotland are among men which Professor Stephen Reicher, who advises the UK and Scottish Governments, said showed the rise was a result of the football 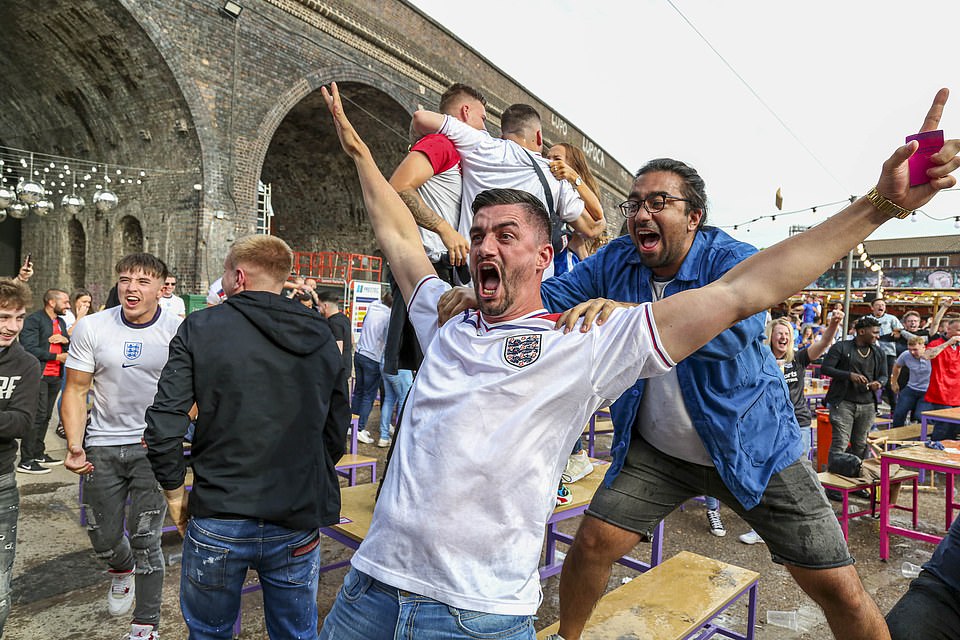 England football fans celebrate the opening goal in the England vs Germany game at the Luna Springs in Digbeth, Birmingham 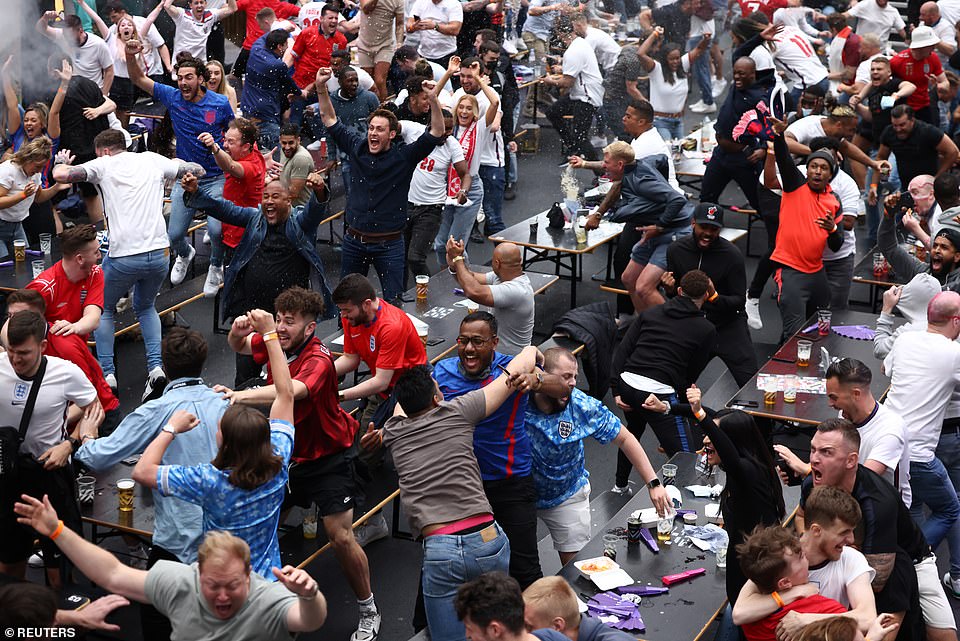 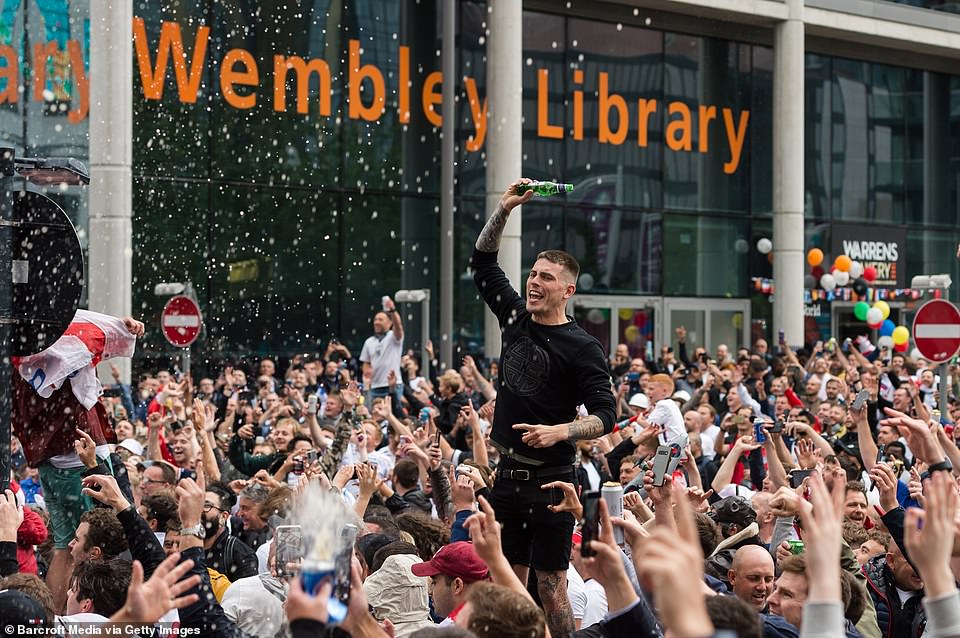 England football fans celebrated outside Wembley Stadium ahead of the match. Drinks were sprayed into the air as supporters cheered

Just one in 100 NHS beds were being taken up by Covid patients in England last week — fourteen times fewer than at the start of the second wave, according to official figures that highlight the power of the vaccines.

MailOnline analysis of the latest NHS England figures show that out of the roughly 87,000 hospital beds at the health service’s disposal, fewer than 1,000 were being taken up by people suffering from coronavirus (1.1 per cent) on June 22.

The low inpatient numbers are made more impressive by the fact average daily infections have risen to more than 20,000 due to an outbreak of the ultra-infectious Indian variant.

Professor Chris Whitty told a meeting of the Cabinet yesterday that hospitals will be able to cope fine after Freedom Day because of the protective ring the jabs have thrown around the population.

The last time Britain was recoding more than 20,000 daily cases and the outbreak was rising was in the second week of December, at the cusp of the second wave.

At that time one in six hospital beds across the health service in England (15 per cent) were being used by people struggling with the virus.

Now, even the worst hit region — the North West — is only seeing 2.4 per cent of its beds full with Covid patients. Covid occupancy is lowest in the South West, where fewer than one in 220 beds are occupied by people with the virus.

Britain’s positive test rate is also much lower than in the winter wave — down from five per cent in December to just two per cent now.

The encouraging data comes as England’s normally-cautious chief medical officer threw his weight behind ‘Freedom Day’ on July 19 by saying the NHS can cope with the expected rise in admissions.

Professor Whitty warned prolonging curbs would lead to a worse peak in winter and encouraged ministers to push ahead with plans to ease restrictions next month.

‘You can’t help but let the whole thing be rather tinged with fears that this will result in a surge in infections,’ he said.

‘People are just letting their guard down and I think a degree of complacency is creeping in.

Asked whether surging Covid cases could be a major concern given the successful vaccination programme, he added: ‘The biggest worry for me is we could end up spreading the virus back into the older population who were vaccinated earlier in the year and who have waning immunity. We should be more cautious.’

Professor Tim Spector, who leads the UK’s largest symptom tracking app, also warned yesterday that data from his study showed immunity among older people sparked by the jabs was slackening in some cases.

He told MailOnline: ‘We’re at around six months after the most vulnerable were vaccinated and we are seeing through our app about a quarter of cases in vaccinated people as that group loses their immunity.’

But in a promising sign he said deaths from the virus are likely to remain low over the summer months, but could rise to a few hundred a day during the winter.

For comparison, Britain was recording more than 1,000 a day at the peak of the second wave in January.

Downing Street said yesterday that Britain must ‘learn to live with’ the virus, and has hinted that they will be able to accept around 20,000 Covid deaths a year, the same as in a bad flu year. England’s Covid cases have already started to soar, with more than 20,000 recorded two days in a row for the first time since late January.

England’s Covid cases have already started to rise a week after their 0-0 draw against Scotland on June 22.

Department of Health data shows in the week after the match infections in England surged most among 45 to 64-year-olds, spiralling by 61 per cent to 1,905 cases a day.

Cases are spiralling fastest in the North East, where they rose by 81 per cent last week to 259.2 infections per 100,000 people.

The North West is still England’s Covid hotspot with 290 cases per 100,000, but it has the slowest growth rate in infections at 26 per cent.

It is possible that the rise was made smaller by the draw, which did not lead to countrywide celebrations as was seen following yesterday’s victory.

Experts say it takes at least a week for someone who is infected with the virus to start suffering symptoms and receive a positive test, meaning it will not be clear whether yesterday’s celebrations have sparked an uptick in cases until data is available for July 6 — before Freedom Day. But hospitalisations and deaths have remained in very low numbers.

Experts warn it can take several weeks for someone who has caught Covid to suffer symptoms that are serious enough to lead to hospitalisation, and then die from the disease.

They expect the figures to rise in the coming weeks, but say thanks to vaccination drive they will not reach ‘anywhere near’ the levels last January at the peak of the second wave.

England, unlike Scotland, does not publish daily Covid infections by sex. But Professor Stephen Reicher, who advises the UK and Scottish Government on Covid, has suggested this could be used to monitor whether the football is sparking a spike in cases. 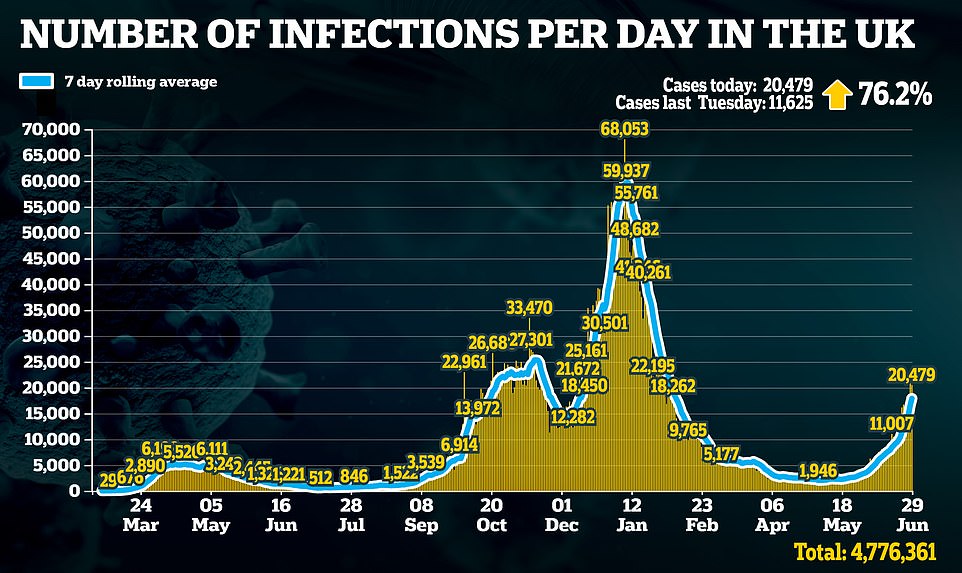 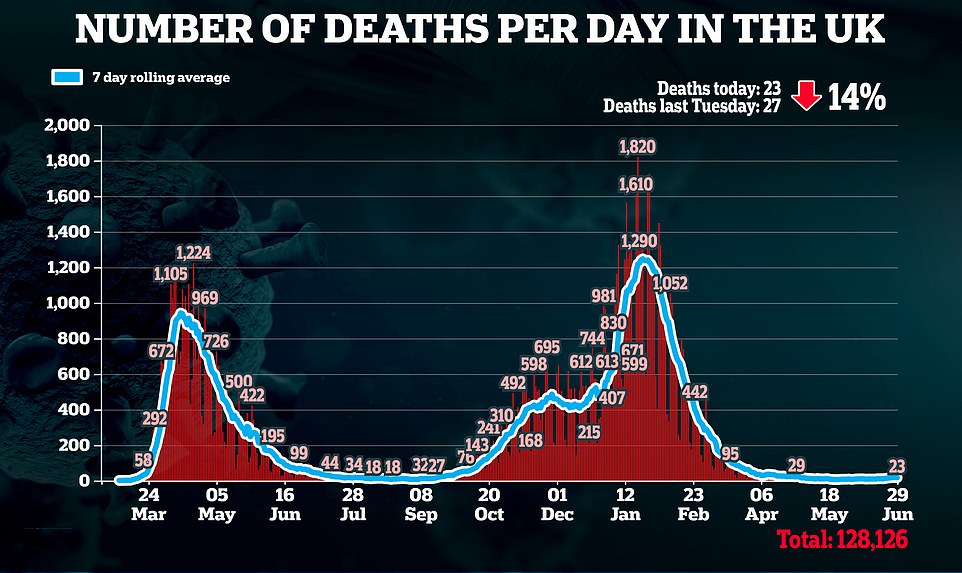 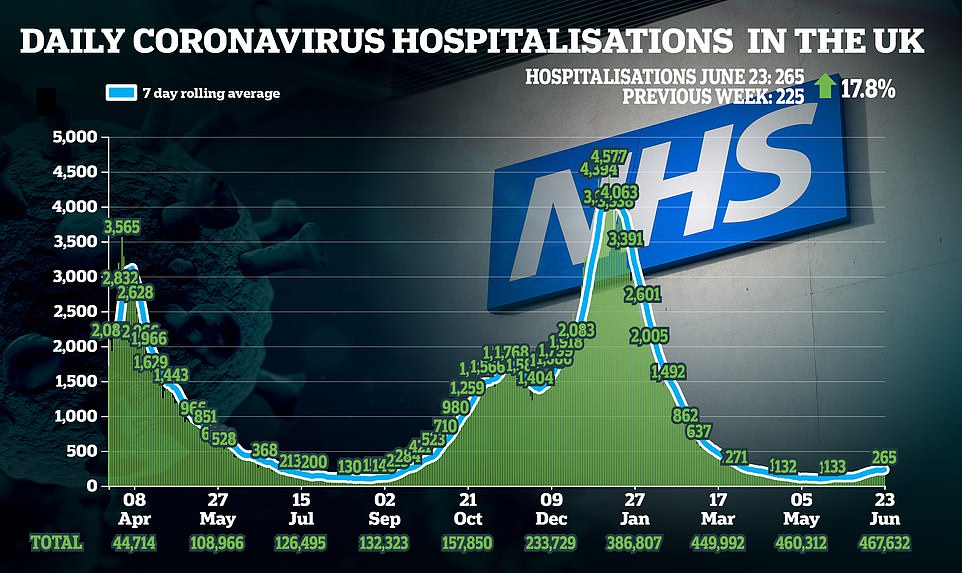 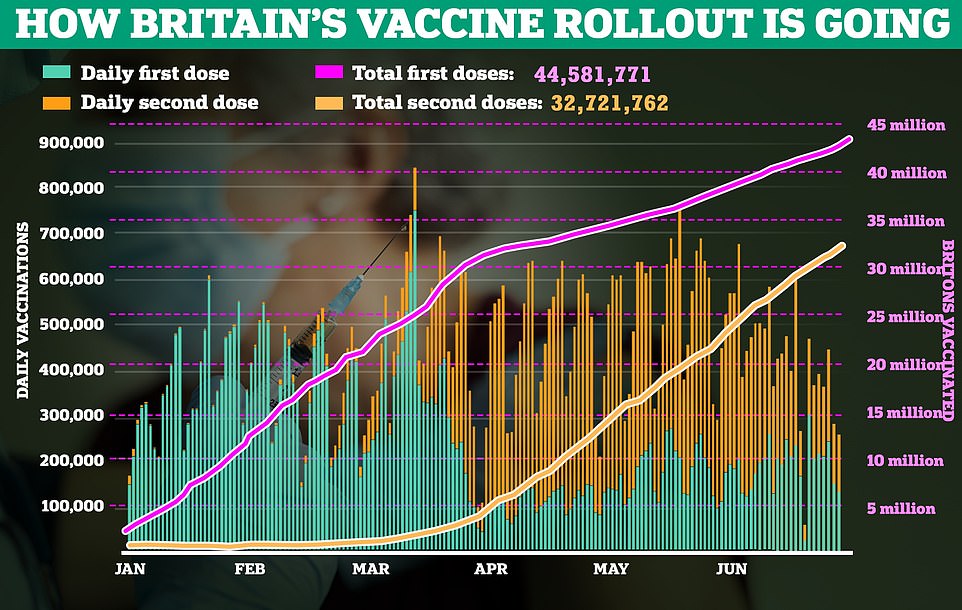 Scotland’s cases surged to their highest levels since the pandemic began after thousands turned out to celebrate their draw with England.

Its cases are currently doubling every ten days after hitting a record-high of 3,285 on Monday. But their daily hospitalisations and deaths from the virus have remained flat.

Scotland recorded 44 admissions due to the disease on June 23, up 25 per cent in a week. But this was still far below the rates in late January when almost 200 people were going to hospital with the virus every day.

First Minister Nicola Sturgeon said yesterday the country was in a ‘third wave’ of the pandemic, but that early signs suggested the peak had ‘already passed’.

She said: ‘This is early days and we need to monitor this over the course of the coming days. But when we look at cases over the past week by the date the specimen was taken, as opposed to the date on which we reported the test result — which are the numbers we report on a daily basis — then what we see is a peak in cases last Tuesday.

‘And since then, we have seen what appears to be a swing down of the rate of increase. So that’s encouraging. But again, I would stress that it is early days.’

She added that the UK’s vaccination drive meant Scotland would not need to start imposing severe restrictions on people’s daily lives compared to earlier in the pandemic.

‘The information that we’re looking at today, we won’t necessarily take the same action as we would on the back of the same information six months ago, because vaccination has really changed the game,’ she said.

Professor Reicher, a behavioural psychologist at the University of St Andrews, told the BBC’s Good Morning Scotland programme last week following the game: ‘A few weeks ago it was about 50:50, men and women got infected at the same rate.

‘Yesterday the data showed that young men – men under 45 – were about three times more likely to get infected.

‘We can’t be sure why that is, but the obvious explanation is that people were getting together for the football and not taking precautions.’

And Edinburgh University’s Professor Linda Bauld said at the time it was still too early to say football fans were definitely behind the rise, but admitted there was a ‘trend’.

The public health expert added that men were ‘more likely to take risks’ and engage in behaviours that could fuel the spread of the disease.