Australian infectious disease experts want a national digital check-in system for restaurants and pubs before the country's internal borders reopen, arguing it could trim up to eight critical hours off the time spent by contact tracers racing to identify contacts of COVID-19 positive cases.

The epidemiologists are also pushing for a cross-border face mask policy mandating masks in Sydney's airport and public transport system, bringing it into line with Melbourne, to stop infections spreading between the two cities. 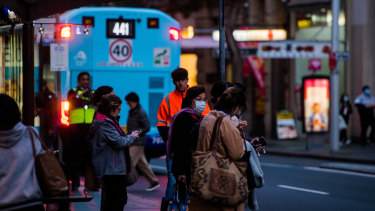 “If we are really going to take this seriously and eliminate community transmission, then masks are a no brainier," Burnet Institute epidemiologist Professor Mike Toole said. "They are cheap, available, easy to wear and they don't disrupt the economy."

The scientists also called for national standards on contact tracing, including a centralised QR code system database, which would allow users to scan a barcode and register their details at venues anywhere in Australia.

"Once borders are open we need to be able to trace that person who went to the pub in South Australia and then went to a pub in Melbourne and track where that person is quickly," Professor Toole said. "It could shave about six to eight hours off that time needed to identify contacts. It is a really efficient device and we should be using it across the country."

Professor Toole said “upstreaming,” a type of contact tracing that works by going backwards and tracing anyone exposed to a positive case days before that person showed symptoms, was also critical and could help reduce the risk posed by super spreading.

To prevent future COVID-19 outbreaks from spiralling out of control and reintroducing the virus to states that have stamped it out, the University of South Australia professor wants a coordinated national response to contact tracing with regional hubs and local contact tracers in each state and territory.

'There needs to be a centralised advisory body, much like the Centre for Disease Control in the United States," Professor Esterman said.

"We need a committee overseeing contact tracing to ensure all states and territories use the same contact-tracing software and staff are trained to the same level."

As NSW prepares to open its border to Victoria for the first time in months, mask use on Sydney’s public transport network has plummeted sharply with only about 20 per cent of passengers wearing them.

"Do I think NSW should be mandating face masks before the borders are reopened? Absolutely," Professor Esterman said.

"But the real issue here is does NSW carry on with its suppression approach or does it want to try get down zero transmission and join everyone else in Australia?"

“It’s not debatable. It’s just the sensible way to go," she said. “We need to use IT much more effectively now."

Masks should be worn on public transport, including Ubers and taxis, across Australia until the end of the pandemic is called, Professor McLaws said, but she acknowledged there would be strong resistance from states which had recorded no new cases in months.

“Given that we want to open up the borders we need to behave as a nation rather than each state having our own way of doing things," she said.

But University of Melbourne epidemiologist Professor John Mathews cautioned against a mandatory face mask policy, saying "when there are no cases of the virus being recorded it would be extremely difficult to persuade anyone to wear a face mask."

He also warned privacy and ethical issues needed to be ironed out before using digital technology, such as phone data or QR codes, to track people's movements between states. The success of the technology also hinged on strict compliance, he said.

"Just as the federal government COVIDSafe app didn't work, would the gains from this be sufficient?" he said. "You would have to do analysis on the QR code to work out in advance whether it even had theoretical value."

Until we have a vaccine, biosecurity expert Raina MacIntyre said every state will be susceptible to a large epidemic and Australia must invest resources into digital tracing methods.

"In the end, if it’s an epidemic that is really large no state will be able to stay on top of the contact tracing because on a day a when you’ve got a thousand cases you might have ten thousand to twenty thousand contacts to trace within 24 hours," she said.

"There has been barriers in western countries because of the privacy issues around digital contact tracing, but it really is the only way to do it when you have a large-scale outbreak."

Prime Minister Scott Morrison announced in September a national approach to contact tracing will be rolled out, with airlines collecting more passenger data and the lessons learned from Victoria's contact tracing failures "spread across all the other states and territories". The details of this scheme are yet to be released.

A spokeswoman for NSW Health said the department continued to closely monitor the situation.

"NSW Health has been and continues to strongly encourage people to wear masks when unable to physically distance, particularly in indoor settings and on public transport, to keep everyone safe," she said.