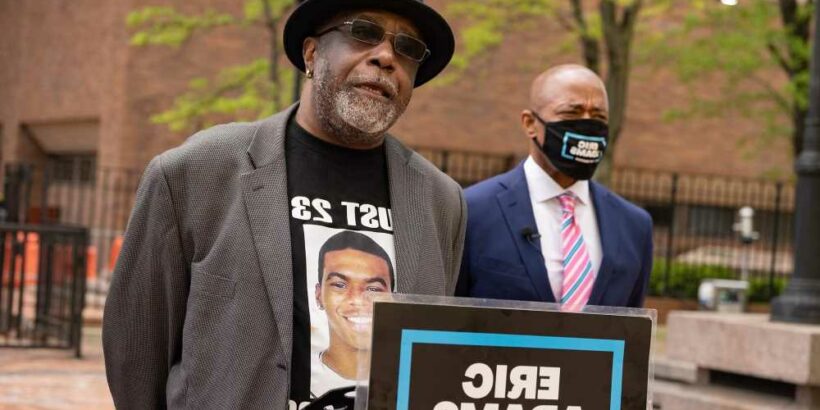 Former cop and current mayoral candidate Eric Adams locked up a second endorsement this week from someone rocked by the city’s most horrific police brutality incidents.

William Bell, the father of tragic groom-to-be Sean Bell — who was killed in a hail of 50 bullets fired by police in Queens in 2006 — stood beside Adams in front of NYPD headquarters at a press conference Thursday.

“He gave my heart really something to feel, not all police are bad. This man cares about the neighborhood. He’s been on both sides of the fence,” said William Bell, his voice cracking.

“It’s not all about politics with him…he’s part of both worlds,” William Bell added.

On Tuesday, Abner Louima, who was sodomized by Officer Justin Volpe at an NYPD precinct in 1997, announced his support for Adams.

Louima met Adams shortly after the assault when he was a supervising officer in Brooklyn and the cofounder of the police reform group 100 Black in Law Enforcement Who Care.

During a Post editorial board meeting earlier this week Adams said he wants to do more to expel bad cops from the NYPD while pushing protesters to show more respect for the department.

Adams claimed Thursday he doesn’t read polls, including the one released Wednesday that showed him edging out fellow frontrunner Andrew Yang for the first time in the race.

As if on cue a supporter interrupted the William Bell press conference to praise Adams.

“Love what you stand for, first time I’ve seen you live, love you kid,” the man told Adams.

“Kathryn Garcia has real, credible, deliverable plans for how she will fix things, and she’s got the track record to back them up,” Krueger said aside Garcia who has 14 years of experience working in city government first under Mayor Michael Bloomberg and then under Mayor Bill de Blasio.

Many political insiders expected Krueger to endorse city comptroller Scott Stringer—before he was accused late last month of sexually harassing an associate in 2001.

Meanwhile Yang, who slipped 3 percentage points behind Adams after leading the crowded field for months, laid out plans to raise $900 million in new city revenue by developing vacant lots across the five boroughs.

Former de Blasio administration lawyer Maya Wiley detailed her own vision Thursday for how to replenish the city’s COVID-starved coffers by reviving tourism and the arts.

Ex-Citigroup executive Ray McGuire who like Garcia and Wiley is polling under 10 percent, tried to boost his popularity by handing out free ice cream to passersby in Nolita Thursday.

Candidates have just over a month until the June 22 primary that will most likely decide the next mayor of the heavily Democratic Big Apple.

The primary will be the first citywide election to use the new ranked-choice voting system. That means New Yorkers will be able to select their preference of up to five candidates running for mayor and other offices — and the ballots will be tallied by first, second, third, fourth and fifth choice, eliminating the need for runoff elections.

This is also the first time the primary, which used to be held in September just ahead of the November general election, will be in June.