Minority religious leaders have urged the federal government to focus on the core purpose of its religious discrimination bill after parliamentary debate became consumed by an amendment about transgender students’ rights and was indefinitely delayed on Thursday.

Chair of the western Sydney-based Australian Sikh Association, Ravi Singh, said he feared the bill had lost its appeal with the public because of this week’s debate, which has revolved around the right of religious schools to expel transgender students. 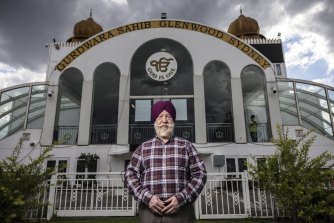 Ravinderjit Singh from the Australian Sikh Association at Gurdwara in Glenwood.Credit:Brook Mitchell

Mr Singh said transgender students or those with diverse gender identities or sexualities should not be discriminated against and legislation should protect them. Mr Singh said the Morrison government was looking to rush the legislation through before the looming election to gain “popularity” among voters.

“We feel it should have been discussed at length,” he said.

“Everyone should be included. At the end of the day this bill, in its name, stands for equality and discrimination-free. Our religion is basically held on the principal of equality and fairness to everybody, regardless of gender, sex or religion.”

Advocates of the bill argue that specific provisions to prevent discrimination on religious grounds are long overdue and form a gap in federal frameworks that protect people on the basis of race, age and sex.

Mr Singh said there was concern among Sikh families that their children can be discriminated against in Christian schools for wearing turbans or growing their beards because it goes against many uniform policies.

“The main concern we have is being a minority religion and Sikhs being easily identifiable because of their appearance and wearing turbans … they are subject to a lot of harassment and bullying and discrimination,” he said.

The spokesperson for the Australian National Imams Council, Bilal Rauf, said this week’s debate about exemptions for religious schools was something the council was “less concerned with, provided it doesn’t detract from the core protective provisions”.

“The thrust of [the legislation] is safety and wellbeing. For us, the focus on the bill from the perspective of minority faith is really the protection it provides,” he said.

Mr Rauf said events such as the Christchurch massacre – in which an Australian killed 51 people while they prayed in mosques – demonstrated Muslims were subject to hatred because of their faith.

“It would be a real pity if the baby is thrown out with the bath water, and the essence of the bill is forgotten in the debate. Yes, there is a need to balance the rights of people. But let’s not forget that at a federal level, there is no protection against discrimination on the basis of a person’s faith.”

He said religious discrimination would become an election issue for the Australian Muslim community, and was most relevant to women who wear a veil and are subjects of instant discrimination because of their appearance.

“If they’re discriminated against because of their Lebanese or Pakistani identity they have recourse. But if it’s because of their faith, which is more commonplace, there’s very little they can do,” he said.

“While there are these other important debates and discussions, we believe it can be addressed and balanced. Our hope is [those debates] don’t stifle or make people forget the core of what the bill is trying to address or the deficiency in the legislative regime.”

Peter Wertheim, the co-chief executive of the Executive Council of Australian Jewry, said Thursday’s shelving of the bill would disappoint many faith communities but was preferable to the prospect of it being defeated in the Senate following a divisive debate.

“If more time is needed to arrive at a bipartisan compromise that most of the country will support, then so be it,” he said.

He said the government should extend to all LGBTIQ+ students, including transgender students, the same protections it has proposed that would make it unlawful for a school to expel a student based on sexual orientation.