Abiy Ahmed names a 16-member cabinet retaining six minister from the government of his predecessor. 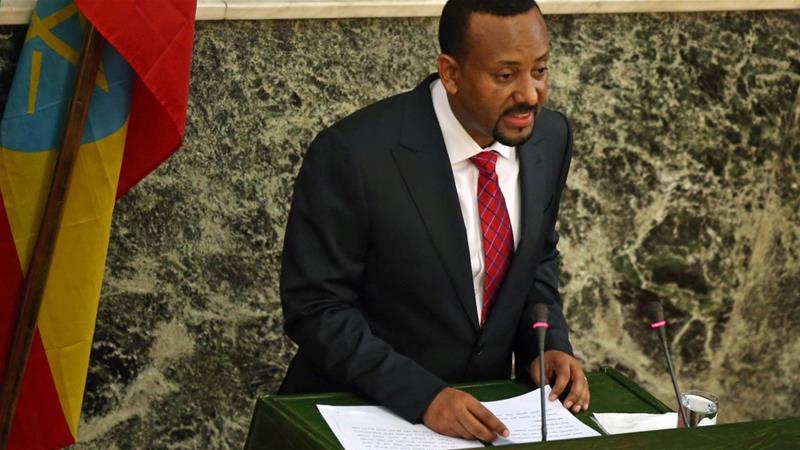 Ethiopia’s new prime minister has named a cabinet that includes the former mining minister as defence minister, and retained the finance and foreign ministers from his predecessor’s cabinet.

Abiy Ahmed, who was appointed by Ethiopia’s ruling coalition last month and sworn in as prime minister on April 2, made the announcement on Thursday on state television.

“I am requesting parliament to ratify the reshuffle of six ministers and the new appointment of 10 others,” Ahmed, a former army officer, said. The remaining ministers from the previous cabinet, including finance and foreign affairs, were unchanged.

The 16-member cabinet includes six names from the previous government of his predecessor Hailemariam Desalegn who resigned in February.

Hailemariam resigned following months of protests in the Oromia and Amhara region that led to the deaths of hundreds of people.

The protests, which initially began over land rights, but later broadened to include calls for greater political representation at the national level, met a harsh government response.

Ethiopia in February declared its second state of emergency in two years amid the ongoing protests that effectively crippled transportation networks and forced the closure of businesses.

In August 2017, Ethiopia lifted a 10-month state of emergency imposed after hundreds of people were killed in anti-government protests.

The country’s Oromo and Amhara people – who make up about 61 percent of the population – have staged mass demonstrations since 2015 calling for greater political inclusion and an end to human rights abuses.