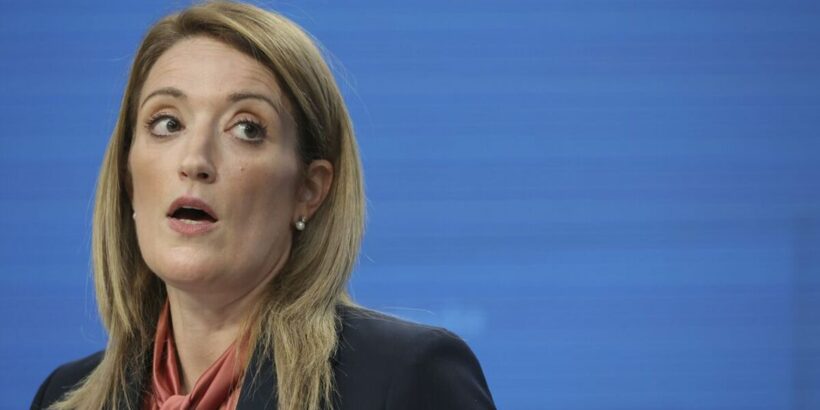 European Parliament President Roberta Metsola missed the deadline to submit a list of all gifts she has received during 2022, fuelling transparency doubts over an already-at-crisis institution after the Qatargate scandal. Ms Metsola declared more than 140 gifts in the past days, missing the deadline for disclosure for at least 125 of the declared items. Among the gifts received, gold coins, scarves, prints and wine bottles.

MEPs are required to publicly declare all gifts they receive throughout their term.

Ms Metsola’s team said the rule does not apply directly to her by “custom” as she the President of the Parliament as well as an MEP.

The delay in her declaration sparked outrage in Brussels at a time the institution is already scrambling to maintain its reputation.

Michiel van Hulten, director of Transparency International EU and a former MEP told Politico: “This shows the system is broken.

“You can’t operate an ethics system on the basis of unwritten rules. It’s good that she’s now done this, but there’s no prize for sticking to the rules.”

It comes as the alleged ringleader of a European Union cash-for-influence corruption scandal linked to Qatar and Morocco has decided to reveal information about the affair in exchange for a lighter sentence, Belgian prosecutors said Tuesday.

Pier Antonio Panzeri, who was charged last month with corruption, money laundering and membership of a criminal organisation, and his lawyers have signed a memorandum in which he repents for his acts, the federal prosecutor’s office said in a statement.

According to a Belgian arrest warrant issued for his wife and daughter, who are living in Italy, Panzeri “is suspected of intervening politically with members working at the European Parliament for the benefit of Qatar and Morocco” in exchange for payment. Both countries have denied the allegations.

Panzeri, a former Socialist and Democrats lawmaker at the European Parliament, set up a campaign group dubbed Fight Impunity that was believed to have been a front for the scheme. Fight Impunity was involved in a number of conferences with parliamentarians in recent years.

In the memorandum created under a little-used legal article, Panzeri pledges to tell investigators how the scheme worked, what financial arrangements were made with other countries, how the money was moved around, who was behind the plan and what they stood to gain, as well as the names of others who might be involved.

The scandal came to public attention in early December after police launched more than 20 raids, mostly in Belgium but also in Italy. Hundreds of thousands of euros were found at a home and in a suitcase at a hotel in Brussels. Mobile phones and computer equipment and data were seized.

The legal deal means that “a limited sentence is provided for Panzeri,” prosecutors said. “The punishment includes imprisonment, a fine and the confiscation of all assets acquired, currently estimated at one million euros,” it said.

Panzeri, his former assistant Francesco Giorgi, Greek MEP Eva Kaili and the head of an aid group were taken into custody after the raids. They are believed to be at the heart of one of the biggest scandals to hit the parliament – the EU’s only publicly-elected institution. Kaili and Giorgi are partners.

MEPs suspended work on all Qatar-related files after the arrests and vowed to toughen lobbying and parliamentary access laws.

Earlier on Tuesday, Panzeri’s lawyers appeared in court but abandoned an attempt to win his release from custody ahead of his trial. One of his team, Laurent Kennes, complained about media leaks in the case that he said were undermining his client’s case, but he gave no other details.

On Monday, an appeals court in northern Italy gave the go-ahead for his daughter, Silvia Panzeri, to be transferred to Belgium as part of the corruption probe dubbed “Qatargate.” But Italy’s top criminal tribunal, the Court of Cassation, will have the final say on whether she actually is sent to Belgium.

Belgian prosecutors are also seeking the transfer of his wife, Maria Dolores Colleoni.