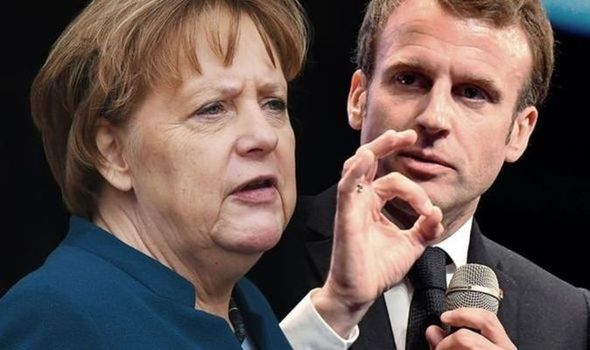 The French President and German Chancellor will block six western Balkan nation’s from joining the bloc unless they can undertaken heavy duty political reforms. At a leaders’ summit in Berlin yesterday, Mr Macron told Albania, Bosnia and Herzegovina, Montenegro, North Macedonia, Serbia and Kosovo that they would need to provide “political stability” in their countries before joining the EU. He vowed to assist them all in delivering social, economic, security and rule of law reforms from outside the bloc instead of through the EU enlargement process.

Mr Macron said: “We will work together on the stability of the region.

“Since 2000, we have withdrawn from the region, but today we want to work together.”

Ms Merkel said she hoped the meeting would contribute to solving the dispute between Serbia and its former province Kosovo.

Serbia does not recognise Kosovo’s 2008 Declaration of Independence.

Ms Merkel has been a staunch opponent to any solution that would involve any form of territory swap – a concept floated in the region.

Brussels has previously suggested supporting such an arrangement between Belgrade and Pristana.

Mr Macron and Ms Merkel’s views are at odds with Brussels, who have largely backed EU enlargement into the western Balkans.

EU officials believe bringing extra countries into the bloc can assist with faster economic progress and broader stability in the region.

Mr Macron understands many are also keen to move into the region to diminish Russian and Chinese influence in the area.

Outside influences “have their interests in the Balkans, but it is clear that European interests matter more”, he argued.

Last year, European Commission President Jean-Claude Juncker used his so-called ‘State of the Union’ address to call for unity over the western Balkans.

He warned that if Brussels did not shape the future of the Balkans, “others” would do so.

Europe can export stability, as we have done with the successive enlargements of our Union,” Juncker said.

“For me, these are and will remain success stories – for we were able to reconcile Europe’s history and geography.

“But there is more to be done. We must find unity when it comes to the Western Balkans – once and for all. Should we not, our immediate neighbourhood will be shaped by others.”