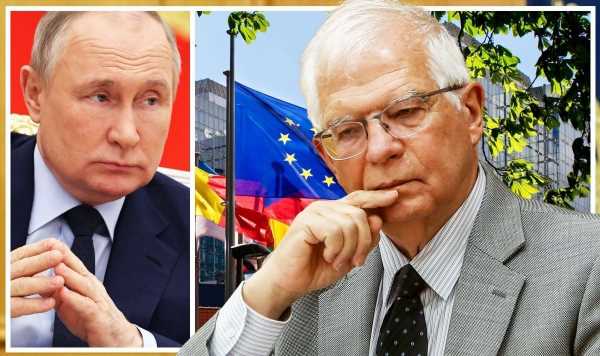 Implementing an energy import ban on Russia would be one of the most effective ways to strongly impact its economy but some EU countries are still firmly opposed to the idea.

It comes after France’s Finance and Economy Minister Bruno Le Maire called for an oil embargo earlier this month.

Josep Borrell, the EU’s foreign affairs commissioner, said this also applies to alternative sanctions such as a punitive tariff on Russian oil and gas deliveries.

He said: “An import ban on oil and gas or a punitive tariff would be important to build pressure on Putin and bring him to the negotiating table.

“But at the moment we don’t have a united stance in the EU on this issue.”

The EU diplomat said that the matter will likely be discussed again at the next EU Summit, which isn’t until the end of May.

Germany and Austria are two EU countries that are firmly against an oil and gas ban as they get a lot of their supply from Russia and hope to find a suitable alternative source before implementing a full ban.

Hungary has completely ruled out a ban as the recently elected leader Viktor Orbán has a close relationship with Putin and has only faintly supported the sanctions against the pariah state.

He previously declared that an energy import ban would “kill Hungary”.

Foreign policy issues must be agreed upon unanimously by EU members which is why there has not yet been a clear consensus on an import ban.

EU countries would need to find alternative supplies and many producers worldwide can increase their production at least in the medium term.

This means an oil embargo is the most likely cause of action, rather than an outright import ban.

An oil embargo would raise oil prices around the world and economically impact nations across the world but a number of alternative options are being discussed in Brussels such as price caps.

This, which has been repeatedly pushed by Italy’s Prime Minister Mario Draghi and leading economists, and would mean customers in EU countries pay less for Russian oil than Russia demands.

There is also talk of transferring only part of the money for oil and gas deliveries to Russia and putting the other part in an escrow account, where it would be frozen until Moscow ends the war.

DON’T MISS:
4 point drop due to Shanghai lockdown brings joy to British motorists [INSIGHT]
Oil shortage: Why is there a shortage of cooking oil? [ANALYSIS]
Petrol and diesel prices could fall ‘in a week or so’, experts predict [COMMENT]

Mr Borrell, EU’s foreign affairs commissioner, said: “The whole EU is in crisis mode. Every time I get on the phone with a foreign minister of a member country and ask where in the world he or she is, they tell me they are buying gas. They are in the Middle East, Congo, Algeria, somewhere in the world buying gas.

He added: “The EU has already dramatically reduced its dependence on Russian energy supplies within a few weeks, and Putin will notice that financially very soon.

“We need sufficient alternative sources of gas supply if we are to do without Russian gas. At some point that will happen, and then Russia will painfully feel the loss of oil and gas revenues.”

The EU’s chief diplomat admitted that the EU realised too late how dangerous Putin is and should have reduced its energy dependence on Russia much earlier.