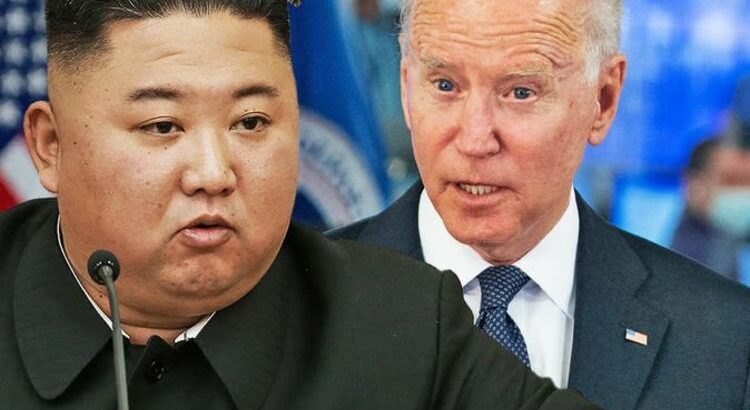 North Korea appears to have restarted a nuclear reactor which is widely believed to have produced plutonium for nuclear weapons, the International Atomic Energy Association said in a report published on Friday, highlighting the isolated nation’s efforts to expand its arsenal. Dutch MEP Michiel Hoogeveen, who represents JA21 in the European Parliament, fears Mr Biden’s administration is guilty of a failure to understand the North Korean mindset which could increase the risk of future conflict.

Mr Hoogeveen has visited the secretive nation on a number of occasions and published a book about his experiences, The Hermit Kingdom, in 2018.

He told Express.co.uk: “It shows the rapprochement policies of Trump are now something of the past.

“At the negotiations between North Korea and the Trump administration in Hanoi, Yongbyon – the heart of NK’s nuclear programme – was an obstacle.

”Kim offered to dismantle Yongbyon in exchange for sanctions relief.

”While the negotiations collapsed, Trump always expressed his willingness to continue.

”And I believe he would have done so, had he been given a second term.”

Mr Hoogeveen added: “Anxiously waiting when North Korea is about to come to the point of near-collapse, so they will offer to negotiate a deal themselves.

“But that is not how the North Koreans work. Last month, North Korea reopened the military hotline between them and the South.

“But the US also continued to push for military exercises with South Korea, which the North sees as a major threat (the same as we see a North Korea nuclear test as a threat for us).”

Whereas Mr Trump eased on the military drills, referring to them as “senseless war games”, Mr Biden has pressed ahead with “full force”, Mr Hoogeveen suggested, in a move which “puts any chance of negotiations with North Korea on denuclearisation at risk”.

Mr Hoogeveen added: “Trump’s North Korea policy was far from perfect (as we have seen from the personal Kim-Trump letters recently published).

“But at least there was the prospect of future negotiations, and the North Koreans upheld their moratorium on nuclear and ICBM testing. With Biden, we are no longer sure.”

He warned: “I think not only the restart of the nuclear power reactor is a worrying development, but the entire situation on the Korean Peninsula is deteriorating since Biden took office.

“Yongbyon restarting, military exercises and a lack of dialogue can contribute to a situation as seen in 2017. Increasing the risk of (accidental) military escalations.”

The IAEA has had no access to North Korea since Pyongyang expelled its inspectors in 2009. The country subsequently pressed ahead with its nuclear weapons programme and soon resumed nuclear testing. Its last nuclear test was in 2017.

In Friday’s report, the agency said the five-month duration of that apparent work, from mid-February to early July, suggested a full batch of spent fuel was handled, in contrast to the shorter time needed for waste treatment or maintenance.

It explained: “The new indications of the operation of the 5MW(e) reactor and the radiochemical (reprocessing) laboratory are deeply troubling.”

There were also indications of mining and concentration activities at a uranium mine and plant at Pyongsan, and activity at a suspected covert enrichment facility in Kangson, it added.

It was a safe bet that North Korea intends any newly separated plutonium for weapons, said Joshua Pollack, a researcher at the James Martin Center for Nonproliferation Studies in the US.

In a speech this year Kim gave a long list of advanced weapons under development, including more nuclear bombs, Mr Pollack said.

He added: “North Korea’s appetite for warheads is not yet sated, it seems.”